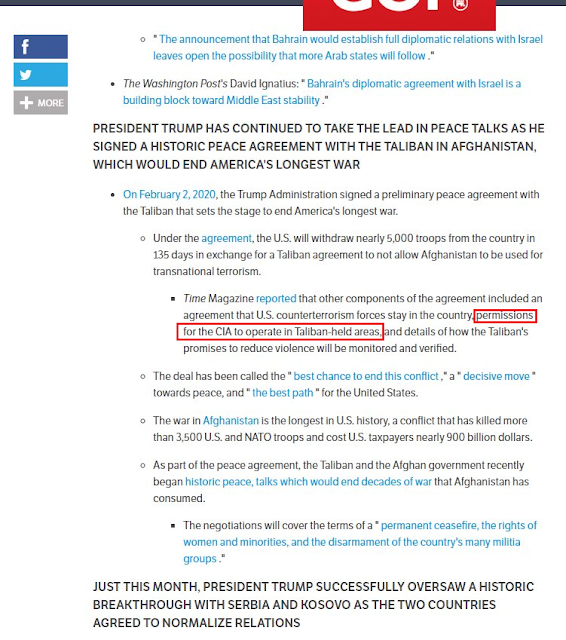 I’d say this was a conspiracy theory … but evidently, it is quite out in the open. What if … events in Afghanistan over the past few weeks weren’t some horrid surprise – but something the Trump Administration was fundamentally OK with.

Think about it. Trump’s a business-man. He maybe saw the ongoing investiture of American forces in Afghanistan as a significant cost … and for what objective? Well, the official purpose of it, was somewhere between “Keep Al Qaeda / ISIS Out Of Afghanistan”, and “Nationbuild”.

The latter purpose was .. not going that well, and in any case, wasn’t something various portions of the US state have been hugely interested in, in comparison to that *other* objective.

Now, if the Taliban have actually been pretty pro-active in fighting ISIS (with, interestingly, American support – it turned out that America was running airstrikes *for* the Taliban in this regard, of late) … well, a businessman’s mind might see it like this:

“We can keep expending money and manpower to fight these guys AND keep a lid on ISIS etc. .. OR, we can subcontract out – get these guys we’re fighting to actually do the expenditures FOR us TO fight the guys we both don’t like, and all we have to do is stop dying in their land. Win-win!”

It’s an acknowledgement that unless the US was prepared to actually restore troop-levels and active-investment in Afghanistan *in the long term*, that the Taliban *were* going to wind up significantly powerful and able to enforce themselves as a government (or, at the very least, as ‘part’ of a government) – so may as well cut them a deal, right?

And, as icing on the cake .. the CIA gets to continue to do CIA things in Taliban held territory, to make sure that Al Qaeda or Iran don’t do whatever it is the CIA wants you to believe Al Qaeda or Iran gonna do. Hell, they might even manage to subcontract out torturing people at black-sites to the Taliban, kinda like the cozy relationship they had with Gaddafi’s guys in Libya in the mid-00s.

We might even get a resumption of small Cessna-style aircraft taking off from local airports laden with ‘high-value imports’ going the other way again … you know what I mean.

And what did the Taliban have to do in exchange for all of that?

*Not* kill any American servicemen for awhile (and they were *scrupulously* good at that last year), and make some vague declarations about how they were going to respect the rights of women and minorities .. broadly speaking.

What have they emphatically done over the past week?

Made vague declarations that many people understandably don’t *at all* believe, about how they’re going to respect the rights of women and minorities.

And the best part?

The collapse happened after Trump was no longer President, so the same guy whose administration negotiated to make all of this possible in the first place… gets to point the finger at his successor for sticking to *his plan* and be like “Miss me yet?”