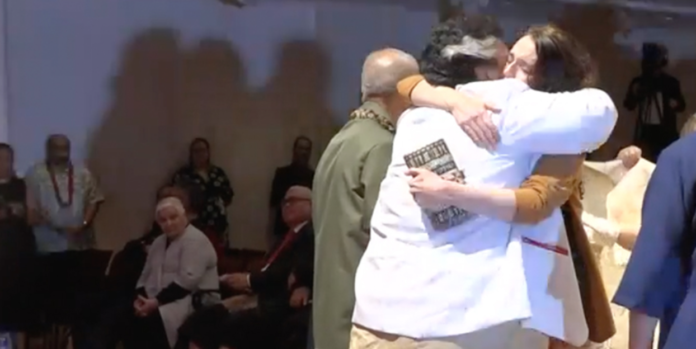 It was difficult to not weep at the formal apology for the Dawn Raids.

The ghosts of 5 decades banged their grief as Jacinda flanked by her Pacific and Maori Caucus were escorted by a Pacifica honour guard into the Town Hall.

From the cries of a challenge to a song of loving welcome, the audience sat in the dark and silence as a soundscape of the Dawn Raids were played with early morning banging, dogs barking and Police asking questions.

It was difficult not to weep as prayer was sung in the wake of that poignant immersion into time.

Jacinda was sitting, covered in humility and emerged into an embrace of forgiveness.

Peeni Henare performed the speech of his career.

Jacinda’s grace and dignity in her apology was another reminder that we have not seen the best of this remarkable leader yet and that her honest empathy for the damage the Dawn Raids caused makes her one of our unique Prime Ministers.

Her articulation of injustice and unwavering criticism of this shameful policy deserves an accolade.

We were wrong to do this. We must atone for that wrong.

It was a day where the naked beauty and power of a genuine apology could heal all sides of injustice.

There is much still to do to unwind the current overstayer issues, a total amnesty would be a fitting response to a day as important as this.