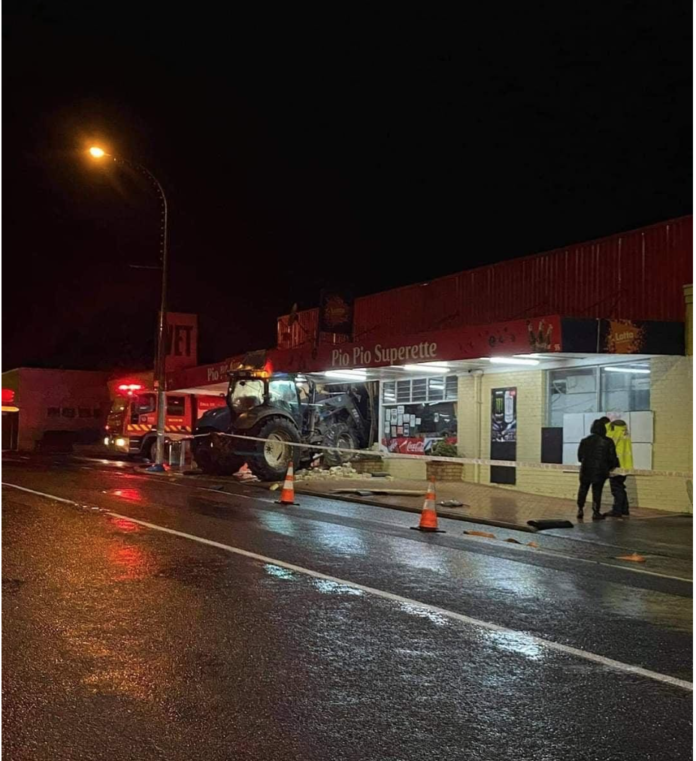 At 5am last Saturday a mystery driver rammed a tractor into a shop that the locals accuse of exploiting migrant workers.

This is a story of several hard-working people who came to New Zealand in search of a better life. Instead, their dreams were shattered in the tiny township of Pio Pio (just south of Te Kuiti in King Country). But this time the locals are stepping up to end this mistreatment.

It all started with a victim we call Allan*. He was employed at the Piopio Superette by Avinash Mudaliar and his wife Bidya. Like thousands of migrants in this country, he was forced to give cash back to his employer to keep his job and remain in New Zealand. Under immigration visa rules, Allan was contracted for $25.50 an hour. But what is becoming a new norm in arrangements like this, he was required to return everything above the minimum wage back to his employers.

The evidence is undeniable. We have audio recordings where the Mudaliars directly implicate themselves. In one, Bidya demands Allan to pay money back, saying “otherwise you won’t get paid”. In another recording, Avinash instructs Allan that this money is required every week, otherwise he won’t get his next pay-check.

If that was not enough, the Mudaliars sent texts each week stipulating how much money Allan was to pay them. Bidya claimed that giving money back was part of the “deal” that they and Allan had entered into. Of course, there was no deal, merely a powerful party forcing its will on a powerless party. There is no shortage of evidence, just a lack of justice.

Allan had no choice but to comply as his visa was attached to the job at the Piopio Superette. If he lost his job, he would face deportation. Over time Allan became increasingly resistant to these extortionist demands. His growing courage drew the anger of Avinash, and Allan was dismissed for “serious misconduct”. Apparently he left a pie warmer on. Allan was hand-delivered his immediate dismissal notice by a relative of the employer while he was at home. Allan was banned from his workplace and has not allowed to step inside since.

This was an egregious act to get rid of a victim who started to stand up for himself. We claim that in just seven months the Mudaliars extorted over $4,000 from Allan.

One Union have filed a Personal Grievance case to get Allan’s money returned. We are also seeking compensation. The Mudaliars deny the allegations. However since we agreed to help Allan, we have been contacted by locals and former employees with their own stories of mistreatment by the Mudaliars. Apparently this has been going on for years.

One long term resident told us that a worker of the Superette would visit her home to make calls to relatives back in India. This victim left New Zealand mentally broken and financially destitute. In our union work e come across this situation too many times. The local say that there has always been a high turnover of staff who have been many victims of exploitation.

Another former worker who had to return to India tells us that over the course of nearly two years working for the Mudaliar’s he was paid $9 an hour, later raised to $11 an hour,  working up to 70 hours a week doing shifts of 16 hours.  There were no chairs in the store and the worker says the workers would have to stand for the entirety of their shift. He says he was never paid more than $600 in any week even after working 70 hours. We are taking his case now too.

Stories like this are just the tip of the iceberg. There are more former workers of the Mudaliars with similar stories of exploitation who are afraid to come forward.  But something  inspiring is happening. Since we got involved, the locals have stepped up to support the workers. The local newspaper King Country News is following this story up. Good on them. Real news still happens, even if it’s only in small towns.

Locals in Piopio have been going into the store to give the Mudaliar’s a piece of their mind about their exploitation. Apparently the employer has made a complaint to the police about their treatment. Wouldn’t it be nice if the police were there to arrest exploiters for criminal theft, rather than people who call an exploiter out. The Mudaliars have threatened to sue me for defamation. Telling the truth is something exploiters aren’t used to. They think it’s a crime. Beyond irony.

Police are investigating and trying to find out who drove the tractor into the store. The locals say the community has closed ranks. Nobody is saying a thing. We are told the superette has lost a lot of trade. As the locals find out more of what is going on, they are mobilising in support of the workers and against exploitation.

Workplace abuse has become too commonplace in New Zealand. But communities coming together to confront exploitation will end it.  Pio Pio sets an example for us. It’s a great start.

Matt McCarten is the director of UTU for Workers Campaign. If you know anyone who is being abused or exploited contact me at Justice@utu.org.nz

*name has been changed to protect the worker.