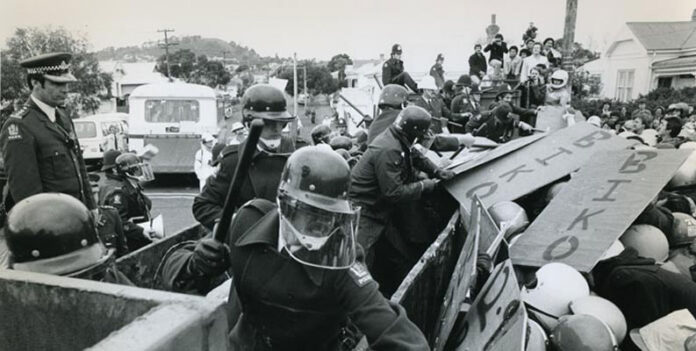 2021 marks the 40th anniversary of the 1981 Springbok rugby tour of New Zealand.

It was a winter of bitterness and discontent as the tour rolled around the country leaving deep divisions in its wake. Images of the passion and fury from the protests against the tour reverberated in South Africa and around the world.

It was a traumatic event for New Zealand, as it was for South Africa, but looking back 40 years on the protests left a positive impact on both countries. We are a better society for it.

The crunch point came with the second game of the tour due to be played at Hamilton’s Rugby Park but the game was called off by Police. Protestors had invaded the field and decorated war hero and Waiuku farmer Pat Macquarie was flying a Cesna aircraft towards the ground to dive bomb the game as he had previously done when a South African baseball team had played in Papakura.

Standing on the field in Hamilton was international solidarity at its finest – and also at its most dangerous. Appalling violence was unleashed on Hamilton streets later that day and well into the night. We were lucky no-one was killed.

The impact of the cancellation was equally dramatic on the other side of the world.

On South Africa’s Robben Island, the penal colony off the coast of Cape Town, the long-term political prisoners quickly became aware of the situation as prison guards were tuned in to the game. Nelson Mandela was in his 18th year in prison (He would serve over 26 years in total) for his role in leading the anti-apartheid struggle. Mandela said that when the prisoners learned of the game being called off because of an anti-apartheid protest on the other side of the world, they grabbed the bars of their cell doors and rattled them around the prison; he said it was like the sun came out.

The tour didn’t stop apartheid but it helped tighten the international sports boycott and helped bring institutionalised racism in South Africa to a quicker end. There were many flow-on effects from the tour but the most important by a long way was the self-reflection on racism in Aotearoa.  Māori activists challenged the anti-tour movement asking how we could be so staunch on racism six thousand miles away and ignore it in our own backyard? Fair comment.

Nine years earlier groups like Ngā Tamatoa had challenged the Pākehā majority about racism here and the debate was deepened and accelerated by the events of the tour and their aftermath. There were many uncomfortable conversations for Pākehā and these continue in many quarters today.

In the aftermath of the tour and the widespread debate it helped spur, the Waitangi Tribunal was given authority to look at historic breaches of the Treaty (previously it has only been mandated to look at future breaches) and so began the Tribunal’s investigations into the history of iwi and the settling, for this generation, of historic Treaty grievances. This is a process which has improved our democracy by bringing accountabilities to the Crown and some small monetary compensation for the appalling wrongs done to Māori which continue to resonate in the present.

We are on a better path now and we are a better country for it.

2021 also marks the turning point in another struggle against apartheid, this time in Israel.

Nobel-Peace-Prize-winner and good friend of New Zealand, South Africa’s Archbishop Desmond Tutu, has described Israel’s policies towards Palestinians as worse than that suffered by Black South Africans under apartheid.

Tutu says when it comes to Israel the world should “Call it apartheid and boycott!”

In January this year the largest and most respected Israeli human rights organisation B’Tselem released a landmark report calling Israel “A regime of Jewish supremacy from the Jordan River to the Mediterranean Sea”.

In its report B’Tselem says:

“…A regime that uses laws, practices and organized violence to cement the supremacy of one group over another is an apartheid regime…”

Three months later B’Tselem was joined by the US-based, Nobel-Peace-Prize-winning-organisation, Human Rights Watch, which released a 213-page report detailing how Israeli policies constitute “crimes of apartheid and persecution” against Palestinians.

These descriptions of Israel are gaining ground quickly. Within the last week a poll conducted by the Jewish Electoral Institute has revealed that 25% of US Jewish voters describe Israel as an “apartheid state”. Such a result even a year ago would have been unthinkable.

Pointing the way forward in the last few days is the United Nations Special Rapporteur on Palestine, Michael Lynk, urging nations to “develop a comprehensive menu of accountability measures to bring Israel in compliance with international law should it continue to defy the international community”

In particular he wants countries to recognise the Israeli government sponsoring of Israeli settlers on Palestinian land in the Occupied West Bank as “a war crime under the Rome Statute of the International Criminal Court.”

Lynk calls these settlers (680,000 across almost 300 illegal settlements) “the engine of Israel’s 54-year-old occupation, the longest in the modern world”.

Palestinian groups have long called for sanctions against Israel and its time New Zealand tackled Israeli racism and apartheid head on, as we did with apartheid in South Africa.

As the tide turns strongly in support of the Palestinian struggle, the campaign against Israeli apartheid has become the anti-apartheid struggle of this generation.