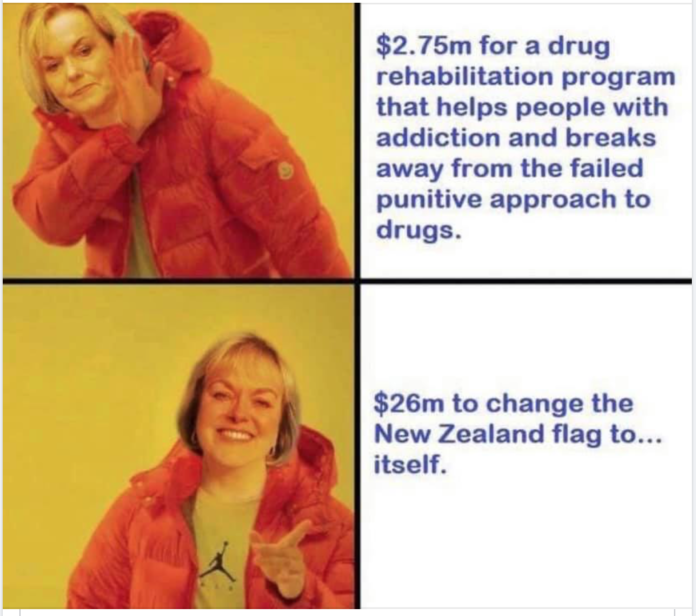 Over the past few weeks we’ve seen a heightened level of scrutiny for the seeming non-spending of public money on an escalating public health crisis. Or, if you’re the National Party, public health money instead being spent on financing the phantasms of organized crime rather than Mike King’s Gumboot Friday initiative. Now, leaving aside the ins and outs of that escalating series of brouhahas (wherein it doesn’t appear that anything untoward has happened with $2.75 million dollars going toward methamphetamine rehab, and Mike King doesn’t appear to have applied for Ministry of Health funding for his project) … we’re nevertheless left with a pretty important question.

Namely, if everybody seemingly agrees that mental health in New Zealand is at a bit of a crisis point – why isn’t the Government ‘Doing Something’ about it?

Does Mike King have a point when he proclaims to all and sundry that the Government is one of inaction here?

Part of the trouble is that what he’s protesting about … isn’t really addressable via funding increases. They certainly help and are vitally necessary – but we’re finding out right now that the Government can literally make available tens of millions of dollars in additional mental health funding …

… yet only expand total capacity by a few beds across the entire country. This is something  that recently happened and they’ve been castigated for it.

Except that’s … the problem.

There’s an old English saying “if you want a good longbowman, start with his grandfather”. It’s not quite so dire with this sector, but basically to get more mental health workers, it takes several years for people to go through training and qualify as such – particularly if they’re becoming highly skilled and more specialized, which is what’s needed for the high-needs stuff.

It also obviously takes awhile to build facilities that are fit for purpose; and while in the old days, the Before Times prior to 2020, the skilled labour input issue could be semi solved via importing people with the relevant qualifications and experience

… that’s uh … that’s not really much of an option right now. In part because – and this is a broader medical sector problem – we’re apparently not able to offer hugely competitive wages relative to cost of living for people who might want to come here (and also because, you know, the border’s mostly closed to non-citizens/residents), and we’re also losing workers to Australia etc.

The trouble is that the whole “we can’t offer hugely competitive wages relative to cost of living” thing is that people only hear the former, and – justifiably – think the Government should pay nurses and mental health workers more. I agree.

Except unless cost of living across the board is somehow addressed, it doesn’t actually make that much difference. It’s simply much cheaper to live in many other countries, regardless of wages, so you’re still further ahead.

Additionally … private sector mental health support is basically either unaffordable / inaccessible for a lot of people to meaningfully engage with (seriously, counselling’s like $80 an hour-long session and goes up from there, and I’m not sure how many people with pretty intractable problems manage to sort what ails them inside only a few of those; for actual more specialized psychology it’s .. hundreds of dollars for even a half-hour) – so it’s a bit difficult to pay them more, unless I suppose, we start rolling out broader subsidies so that many more Kiwis can basically go through the private system rather than the public one, part-paying themselves and part-paid-for by the taxpayer.

Which isn’t a bad idea at all.

Except for the slight issue that it’s already rather difficult to get expeditious appointments a lot of places precisely due to demand relative to supply, which leads us back to point number one.

All up, we’re seeing the net impacts of a rather massive under-investment and under-support of the health sector in general , and mental health specifically , for … many many years now; and because Labour indicated they were keen to doing something about it, they’ve come under a lot of pressure for not having sorted the entire thing out inside a single Parliamentary term.

It’s totally understandable – and even, I’d argue, justifiable – to feel frustrated with the pace things have been going at.

However, I’m not entirely sure how much faster or more efficient things could actually really be – in the short term, anyway.

The simple, lamentable truth is that there is no Golden Bullet in this situation. If there were, I’d like to imagine that the Government would have fired it already.

Unfortunately, delays in this sphere can quite literally be lethal. However, I’d also have to question whether making a politicized hot-button issue out of an impossibility – that is to say, hammering the Government for something they don’t necessarily have a huge degree of control over – is really the best use of anybody’s time or mental-psychoemotive bandwidth.

I leave it for other, more informed minds to let us know what could be feasibly done in the short or even medium term to change this situation for the better. Whether there’s some easy institutional fixes to expand accession and capacity, make it more affordable for people to get into what’s already out there perhaps.

The point is – it’s not such a black-and-white situation as people either want to believe, or have been lead to believe. We don’t really do very well with communicating complex, nuanced issues through either our adversarial politics or our often ‘gotcha-‘ oriented commentariat/media. And that can lead to – as in this case – a misimpression that the Government is being callous (rather than cautious, or constrained by circumstance). A perception most definitely fostered by those either genuinely passionate about attempting to prod and/or bull-whip them into doing more, more quickly (i.e. King), or some certain other voices who are basically just looking for any excuse to attempt to dent our Government. Potentially so that they can then have themselves a go of presiding over non-action instead.