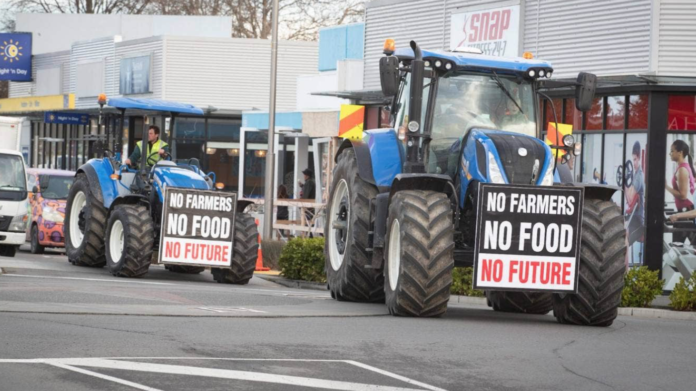 The size of the farmer protests should seriously wipe the smug condescension off the Woke on Twitter.

I don’t think NZ Farmers have a working definition of socialism, communism or democracy if they are claiming Jacinda is making NZ a socialist state

Labour won their unprecedented MMP victory because Jacinda’s Covid leadership won over hundreds of thousands of 45+ female voters who John Key had won over in 2008 when they were in their 30s.

Those 45+ women voters want EVs and love the rebate, the naked truth is that the majority of Men driving Utes don’t vote Labour.

The truth is water quality now impacts everyone and the pollution of that water from dairy intensification won’t be tolerated.

The truth is climate change is real and we can’t allow cows to keep contributing to that.

The truth is Farmers are selling productive land to the Americans and Chinese and we must stop this for our own national interest.

The truth is the National Party are in decline and Farmers can’t get them to sell 49% of our state owned energy assets to create an irrigation slush fund worth $400million to convert as many square inches of NZ into intensified dairy farms!

The truth is that large scale corporate Dairy is a sunset industry with synthetic milk and meat likely to produce far cheaper and less environmentally damaging food, (plus an end of cruelty to the animals themselves)…

We need to create a sinking cap on the number of cows with a view to reducing any of the benefits Dairy have used to prop up their sunset industry and divert that resource into new industries, new technology and new research and development. As many Dairy farms need to be converted to forests as quickly as possible and focus needs to be on providing for the domestic market and not the international market any longer.

Farmers feed 40 million people but we need them to just feed the 5million of us!

Labour shouldn’t panic, these Utes & Tractors don’t vote for us, but if this anger spreads to the suburbs via Hate Speech backlash – we are fucked!