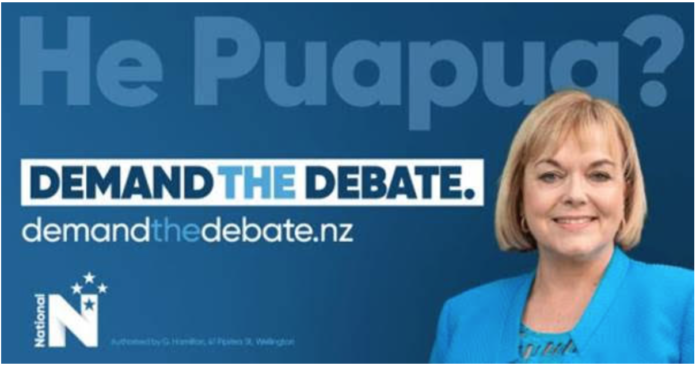 THE NATIONAL PARTY’s “Demand the Debate” campaign speaks volumes about the Right’s ideological weakness. A more coherent and courageous conservative party would not have demanded a debate, it would, instead, have encouraged one by taking a clear, well-argued position on the issues under scrutiny. The obvious conclusion to be drawn from this failure is that, at present, National is unable to formulate a clear position. One suspects, moreover, that even if it was capable of doing so behind the Caucus Room door, it lacks the confidence to argue it in public.

Not everyone involved in politics needs to be a philosopher, but when the ideological temperature has risen to its current level, a party’s leader must be able to hold their own in any debate about the “whys” of politics. It is easy to accuse Judith Collins of not being equal to this most basic of political responsibilities. But, by any honest assessment, neither is the Prime Minister. Yes, Jacinda Ardern possesses formidable “communication skills”, but that is not quite the same thing as being able to present a coherent defence of one’s policies. Her inability to explain her government’s proposed “Hate Speech” legislation is only the most recent example of this rather significant failing.

When did philosophical literacy cease to be a core competence of political leadership? Past New Zealand political leaders managed to explain themselves and their parties with reasonable fluency, why not the present crop?

A clever post-modernist scholar would, at this point, wax eloquent about the collapse of the metanarratives that underpinned the politics of the twentieth century. Not just the Marxist metanarrative but, at least two decades before the 1991 collapse of the Soviet Union, the dramatic attenuation of the practical Christian compassion which, for at least two centuries, had blunted the teeth and claws of free-market capitalism. An even cleverer social historian might point to the subversive consequences of the 1960s “counter-culture”, which elevated personal choice above political conviction and turned “you do your thing and I’ll do mine” into the guiding wisdom of an entire generation.

Into this rather barren philosophical landscape rolled the Tiger Tanks of the Neoliberal Wehrmacht. With everybody else’s philosophy reduced to rubble, the Neolibs were able to establish an ideological monopoly of unprecedented durability. Nobody expressed the new reality better than Francis Fukuyama, the US State-Department savant who penned the in/famous 1989 essay entitled “The End of History”. According to Fukuyama, the great battles of ideas that had driven history forward for 2,000 years were over. Liberal-democratic, free-market capitalism had won. It’s ideas weren’t just the ideas of the ruling-class, they were the ideas of every intelligent, well-educated person. Henceforth the only philosophical catechism a political leader needed to master was: “Leave everything to the free play of market forces.” Anything more complicated than that was bound to set their country on the road to serfdom.

But history didn’t end. If anything, the free play of market forces only speeded it up. In their haste to implement the supposedly last great ideology, the Neolibs cast aside the great post-war stabilisers of a prosperous working-class and a civic-minded middle-class. In the resulting “there is no such thing as society” moral wasteland that ensued just about everybody became a survivalist of some sort. Investing emotionally in a political ideology, even thinking philosophically, became a mug’s game.

With nothing left to do, political parties became the equivalent of hood ornaments. The voters cared only about how political leaders looked; the social caché they conferred; how they made them feel. Nobody gave two hoots about what they thought!

John Key and Jacinda Ardern provide outstanding examples of this new kind of political leadership. Very early on in their careers, they grasped the key lesson of Neoliberal politics: that leaders didn’t need to be effective as much as they needed to be affective. Providing you engaged the electorate’s emotions in a powerful way – “I feel your pain” – what you actually achieved really didn’t matter. The working proposition was, after all, that “the government that governs least, is the government that governs best”. Politicians weren’t supposed to do much more than smile and wave – and take selfies with their adoring fans.

Meanwhile, behind all this front-of-house flim-flam, the problems of capitalism (which had never gone away) continued to accumulate. The rich got obscenely richer, while more and more previously comfortable citizens became decidedly uncomfortable. Infrastructure, the crucial skeleton of a modern industrial society, was simply left to rot and decay. Not just roads and bridges, but schools, hospitals and universities. If there was demand, there would be supply. Adam Smith’s “Invisible Hand” would build all the houses people needed. If there were no houses for the poor, then clearly that was because the poor preferred to sleep under bridges and in cars. Supply and demand, mate, supply and demand. Stands to reason!

In the end, of course, simply mouthing Neoliberal slogans wasn’t going to cut it. The neoliberal economists could insist all they liked that their discipline was about responding to people’s choices, but they were wrong. Economics, in the end, is about meeting people’s needs. Socialists have always known this, and so too, in their own quiet way, have conservatives. The socialists have positioned themselves across the tracks of history and demanded “Justice!” The conservatives (according to William F. Buckley) have stood athwart history and cried “Stop!” The important thing to remember is that Neoliberalism cannot afford to surrender an inch to either of them.

Judith Collins is demanding a debate because, from somewhere in the back of her mind, a tiny voice is reminding her that if injustice isn’t stopped by politicians constitutionally, then it will be stopped by the people unconstitutionally. Somehow, people must be persuaded to once again take politics seriously. Reality engenders ideas that need to be given a voice. If only she could remember how to evaluate and express those ideas. If only she could remember the words. Because then she would not need to demand the debate – she would have one.