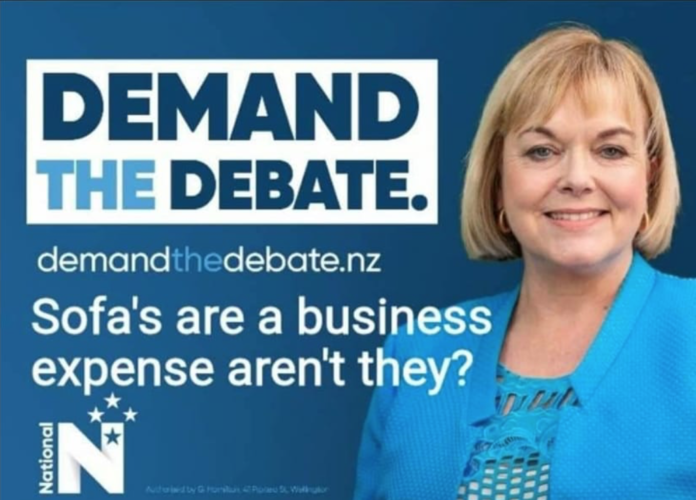 Well thank God, National are demanding a debate and I for one couldn’t agree more!

Let’s have that debate that National have been avoiding.

What the hell was Michelle Boag thinking when she gave Hamish Walker privileged information about Covid patients?

What the hell was Walker thinking when he tried to leak that to the media?

What the hell was half your Caucus thinking when they turned on Bridges for Muller?

What the hell was Muller thinking when he knifed Simon Bridges and then promptly imploded.

What the hell was Nikki Kaye thinking backing Muller?

What the hell was a National Party Board member doing calling ZB to smear one of their own candidates because she wasn’t white enough for National?

What the hell was Gerry Brownlee doing by claiming conspiracy theories about the pandemic?

What the hell was Judith doing starting fights with fat people in the last week of the election?

Why did Judith destroy Iain Lees-Galloway just to take media attention away from her handling of Falloon?

Why the hell has National simply reverted back to a ‘we hate Maaaaaaris’ as a default policy position on every thing?

Why the hell was Nick Smith assassinated and Todd Muller cast out? Is the National Party just the mafia now?

Jake Bezzant. What the fuck?

National are playing a clever game demanding a debate because it insinuates Labour have a secret socialist agenda,

The danger is if people agree to a debate because National have nothing in terms of an actual intellectual or philosophical political position on anything.

It’s not a debate that National want, it’s a food fight on social media they are trying to instigate.

National should spend less time on demanding a debate and spend more time on actually having something to say.

Will it be enough to stop ACT cannibalising National vote? Probably not, but it does cement Judith in place as leader until Simon Bridges book comes out.