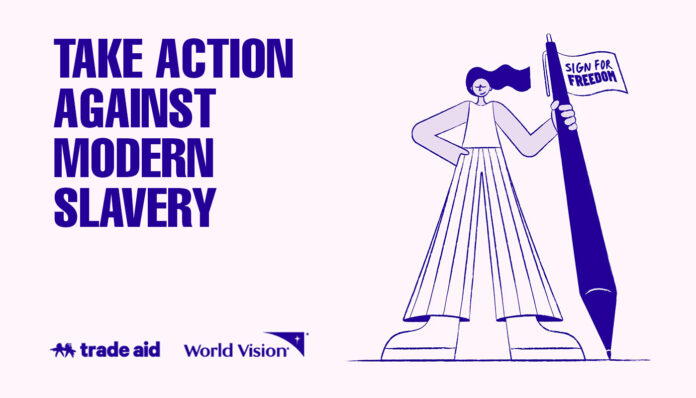 Trade Aid and World Vision and many other supporters head to Parliament tomorrow (29 June) at 12.30pm to present a collective petition calling for a Modern Slavery Act. More than 36,000 New Zealanders have signed, asking the Government to act now.

Modern Slavery goes against our Kiwi values. New Zealanders have united with a strong message that they do not want slavery in our goods.

Modern slavery legislation will make it easier for Kiwis to expect slavery-free products and services from companies. The Modern Slavery Act would require New Zealand businesses to understand the risks in their purchasing, report on those risks, and take action to address them. These changes will result in fewer people being forced to work, to produce the items we buy every day.

“40 million people are in modern slavery around the world right now,” says World Vision New Zealand’s National Director Grant Bayldon. “That’s more people now than at any point in history – and 10 million of them are children. That’s just not acceptable.”

“This petition sends a clear message to the government that Kiwis and our business community want this vital legislation,” says Trade Aid CEO Geoff White. “Government cannot wait any longer and needs to act now.”

Business is also on board. 110 New Zealand businesses have signed a letter calling on the government to move towards enacting the legislation.

Tomorrow Trade Aid and World Vision will present Minister Michael Wood the collective petition, along with the business community open letter. We are proud to have support across Parliament, with many MPs attending.

The event will go ahead with level 2 restrictions in place. Anyone is welcome to come along. For those who cannot attend in person, they can watch the event live through Trade Aid’s Facebook page.

Use the power of the pen and sign the petition at Signforfreedom.nz