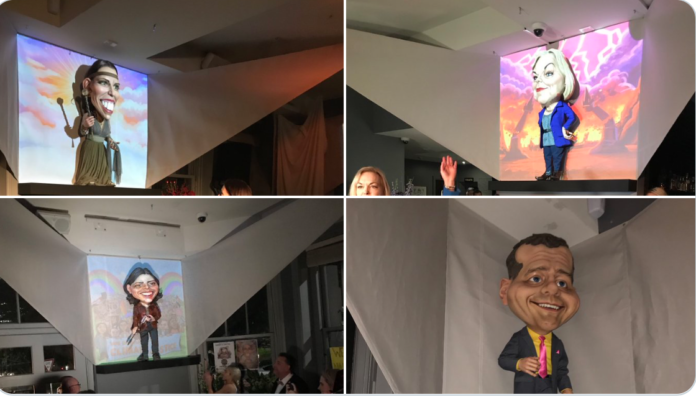 The Backbenchers Pub puppets have been unveiled and they are so pathetic it’s embarrassing.

The puppets are all so soft and pitiful – any actual satire has been removed in case any offence was taken!

Jacinda should have been the Mother of Dragons with a huge smile on her face while her Dragons sat on crushed Kiwibuild houses and children in poverty. It should be called ‘Neokindness’.

Chloe should have been a baby in nappies inside a giant bong that slowly puffed out dry ice. The artwork should be called, ‘It ain’t easy being Green’.

David should have had a maniacal grin on his face, dressed as a Dr stabbing a euthanasia needle into sick poor people while his puppet twerks. The artwork should be called ‘Adam Smiths invisible hand’.

Judith should have been standing  hands over head holding onto the severed heads of Iain Lees-Galloway, Simon Bridges and Todd Muller with spurting red blood coming out their eyes. The artwork should be called, ‘I call this a normal Tuesday’.

See those would have been funny, these safe bland nothings of mediocrity however is what we sadly get.

No actual bite – weak bland satire too scared to offend – in a way these trigger free safe space puppets are the perfect reflection of the culture today. 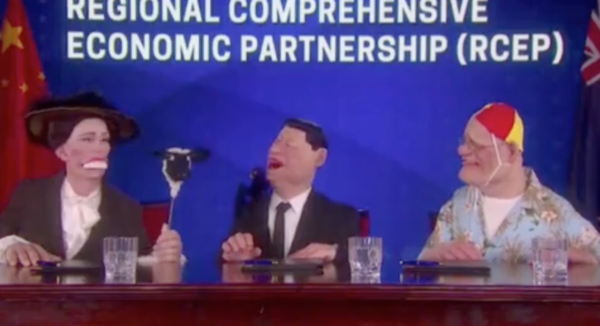 The satirical skit, which aired in the UK over the weekend, shows the Prime Minister at a trade summit with China’s leader Xi Jinping and Australian Prime Minister Scott Morrison.

Xi tells Ardern he is looking forward to a “prosperous trade deal with no questions asked”.

Morrison then dumps a bag of coal on the table stating, “we are just happy to be selling our clean coal”.

Ardern’s puppet – once again dressed as Mary Poppins – then bursts into song with Morrison joining in for the last stanza.

We couldn’t tell this joke in NZ because it’s obviously a heteronormative white cis male patriarchal attack on a feminist icon, but thank the little baby Jesus that the UK can still make satire that NZ is too cowardly to even think about.

NZ can’t make satire like this because we are too frightened to offend. 7 Days, The Project, Is anyone paying attention?, any comedy that doesn’t star Leigh Hart, it’s all weak jokes with no real punchline. Live comedy is vetted to ensure no one weaker than the joke is offended, speaking to a male comedian last year, there are now self appointed Comedy Commissars, female comedians who will turn up at a show and note any jokes that aren’t funny and take them back to the feminist comedy conclave who will humourlessly rate how ‘safe’ a male comedians comedy  is.

It predictably concludes comedians love the current woke landscape (the article didn’t mention the feminist Comedy Commissars), however I think if we start to see a rise of comedians who want to break free from the current  self censorship culture and start ‘phone free anti-woke comedy safe spaces’ where comedians are free to be as offensive as they like and the audience don’t use phones to cancel the comedians, if we see a rise in that type of underground comedy, I could be tempted out.

The excitement of being free to laugh at what you are not allowed to laugh at is powerful.

These sad statues of insipidness at Backbenchers are not to make you laugh, they are a punishment for you laughing. 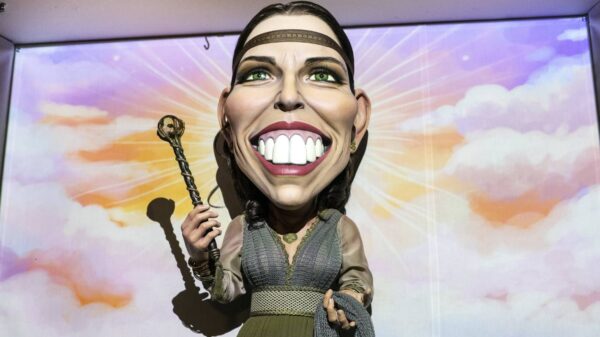