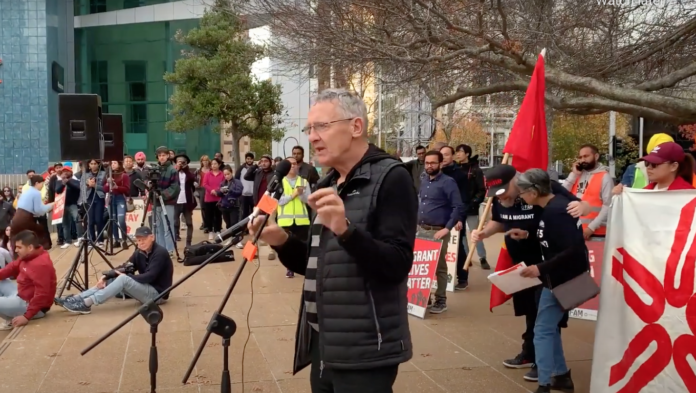 Demand justice for all migrants:

How can the broken immigration system be fixed?

The government now has the powers to fix a crisis in the migrant labour system that has been developing over the last few decades.

This system promised those who were willing to study and work here the possibility of transitioning to permanent residency once they had completed their studies and found suitable work.

For many years, that dream was a possibility. New Zealand needed these people because we lose about 1% of our population each year permanently to outward migration, mostly to Australia.

Even just to maintain our population, we needed to issue around 40,000 permanent resident visas a year.

As a consequence, approximately one in four Kiwi-born New Zealanders live abroad and one in four NZ-resident Kiwis were born abroad.

By 2020, the number of temporary work visas being issued hit a quarter of a million and there were about an additional 100,000 student visas with the right to work.

Over 300,000 people were working in New Zealand on some form of temporary visa – 15% of the workforce.

But for the last two decades, it has become harder and harder to transition to permanent residency. The promises being made to students and workers coming to this country – that there would be a reasonable chance to transition to residency – were increasingly impossible to meet.

Entire industries had become dependent on workers on temporary visas, and could not operate without them.

Temporary visas became the drug of choice to fix the problem as these industries were unable to recruit and train Kiwis to do the jobs at wages that genuinely reflected the skill and work intensity involved.

But these migrant workers were desperate to please their employers and would do anything to win the opportunity to be sponsored for permanent residency.

There was no incentive for employers to fix the problems that stopped them from recruiting labour in the first place.

This system has also resulted in horrific cases of exploitation.

Many of these workers end up overstaying their visas to earn enough to pay back the debts incurred getting here.

Post-covid, there will be no return to a dependency on issuing hundreds of thousands of temporary visas each year to plug gaps in employment and subsidise the public education sector.

This situation gives us the opportunity to fix the problems for those already here and honour the promises made to them and then broken after they arrived.

There are currently about 250,000 people in NZ on a temporary visa. A few thousand more are probably “overstayers” who should be seen as victims, not criminals.

We will not be able to replace them in the immediate or even near future.

Most probably want to stay. Many have spent tens of thousands of dollars on degrees and put up with unpleasant jobs for the right to residency.

Many have been here up to a decade, renewing their visas again and again, and some have children born here.

Most employers want these workers to be able to stay. Most unions want pathways to residency so workers can escape their vulnerable status that is so prone to exploitation.

We can discuss at our leisure what sort of migrant labour system we will need in the future but NZ will always need new permanent residents so long as there is a significant wage differential with Australia that attracts labour there.

Employers, unions, and the government also agree that significant investment in training is required.

Soon the government will be announcing new criteria for accessing residency using the special powers they have been given.

This policy must include pathways to residency for those here or overseas who have made NZ their home, an end to bonded labour and an amnesty for overstayers to join this pathway.