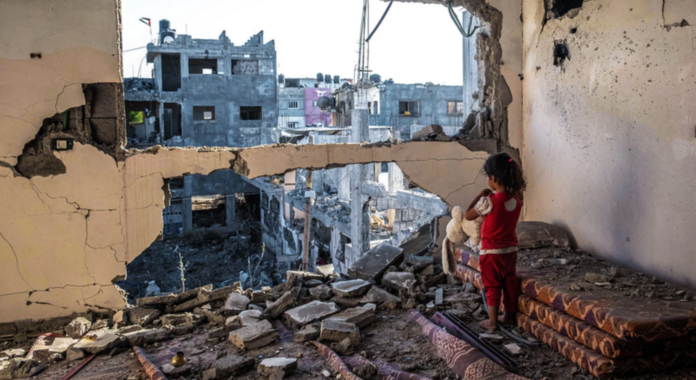 As June began, and without the slightest notice taken by any of the mainstream news media, Israeli ceasefire violations resumed in Gaza and everything returned to what Israel regards as ‘normal’. On 1 June, an Israeli Army position behind the Green Line opened fire towards agricultural land, north-west of Beit Hanoun. The next day, Israeli forces, accompanied by reconnaissance aircraft, invaded an area east of al-Fakhari and laid waste to the land for over four hours. Three other attacks from across the Green Line followed and the Israeli Navy opened fire on, and pursued, Palestinian fishing boats off Khan Yunis. There was no reaction from Gaza to the those attacks. On 3 June, Diana Abu Al-Awf Al-Yazji, a resident of Gaza City, died in hospital from injuries received during an Israeli air strike on al-Wahda Street in the centre of Gaza City. A further 37 residents, including her two daughters, Rawan and Shaima, were also killed at the time.

Nearly 80,000 people, including 30,000 children, were forced to flee their homes during Israel’s 11-day blitz on Gaza and at least 222 people, including 63 children, were killed. The destruction Israel wreaked on the territory left 74,000 people, mostly women and children, forcibly displaced and homeless. It also left more than 450 buildings damaged, with many completely destroyed, including six hospitals and nine healthcare centres. A water desalination plant, serving around 250,000, was also destroyed.

The latest round of intensified Israeli state terrorism has invigorated and unified both Palestinian and global grassroots resistance to the Occupation. Their action and voices have challenged the mainstream news media into publishing and broadcasting, at least to some degree, reports of Israel’s war crimes and human rights abuses. The recent increase in well-informed comment made in response to this column is just part of a wider world awakening. Also well worth noting is the revealing lack of credibility in the few counter-arguments offered in support of the Zionist enterprise!

Colonisation of belligerently-Occupied territory is a war crime

At every level in Western society, Israel’s agents work to undermine free speech and any action designed to bring Israel to account but there is also wide-ranging resistance to that. On 12 May, the General Court of the European Union ruled in favour of litigants seeking to ban the importation of goods from Israeli settlements in belligerently-Occupied territory, overturning a refusal decision by the EU Executive Branch to implement what it said would have amounted to sanctions. This European Citizens‘ Initiative case was won, with assistance from the European Legal Support Center (ELSC). It is evident that there is growing unease and an uncomfortable realisation of responsibility in international circles, including the United Nations.

The Zionist regime commits its crimes against humanity in the name of Jewish people worldwide, yet growing numbers are saying “not in our name”. In the US, for example, there are Jews calling upon Congress to end US military-funding to Israel. According to the Pew Research Centre, an unprecedented amount of American Jews now believe that a demilitarised and decolonised future means a safer world for us all, and recognise BDS as a viable method for achieving that. On 14 May, over 700 people attended a Shabbat service in the streets of Brooklyn, where protesters read the names and placed stones in remembrance of Palestinians killed in Israel’s latest attacks. Rabbi Miriam Grossman, of Congregation Kolot Chayeinu, led the gathering in reciting the Jewish prayer in honour of those who have died. The next day, again in Brooklyn, thousands more joined massive Palestinian-led protests in Bay Ridge — the heart of Palestinian New York.

Here in New Zealand, Dayenu — New Zealand Jews Against Occupation, held a vigil on 22 May “for the lives lost during the last spate of aggression in Israel/Palestine. For each life lost we had a candle. On one step of Freyberg Square there were 13 candles for the Israeli lives and cascading towards the Metropolis apartments were 274 candles for the Palestinian lives lost. We understand that their numbers are still climbing.”

This change in atmosphere led the UN Security Council, on 27 May, to request a briefing from Dr Rashid Khalidi to advise members on the necessary steps to strengthen and implement UN resolutions, in order to provide peace and security for all in Palestine. A Palestinian American, Rashid Ismail Khalidi, is a Historian of the Middle East, Edward Said Professor of Modern Arab Studies at Columbia University and Director of the Middle East Institute of Columbia’s School of International and Public Affairs.

Khalidi’s briefing to the 8782nd session of the UN Security Council noted that there was now worldwide recognition of the injustices suffered by Palestinians. He reminded the UN body that, “Institutions like the United Nations Security Council have a duty to ensure that Israel, a nuclear-armed regional superpower, is not placed on the same footing as the Palestinian people who have never been allowed to enjoy self-determination.” Khalidi recalled being a college student when, on 9 June 1967, at the height of Israel’s annexation war, he had sat “in the Visitors’ Gallery of this very chamber watching as a permanent member ensured the impunity which allowed a member state to ignore Security Council cease fire resolutions and continue its offensive for another 24 hours.” This failure to deal with the problems posed by Zionist contempt for international law had guaranteed a future full of them. He certainly felt that the betrayal had brought shame upon the Security Council.

Palestine is important and cannot be ignored

Dr Khalidi described present proposals, such as “rebuilding the degraded infrastructure of Gaza with no guarantee that it will not be destroyed for a fifth time”, as palliatives. He described the so-called ‘peace process’ as meaningless. He reminded the Security Council that it is still bound to deal with three “core issues”, which he recalled as being: “the dispossession of the Palestinian people starting in 1948, the status of Jerusalem, the supposedly temporary military occupation that has endured since 1967” and the “ensuring that any projected solution is grounded in international law, and in the resolutions of this Council, and is not based on what happens to be convenient for the most powerful actors that are involved in this issue.” Vitally, Khalidi’s briefing reminded his audience that “the solidarity marches, the social media explosion, the unprecedented nature of the mainstream media coverage of recent events, the massive wave of solidarity with the Palestinians the world over, all of these phenomena together show that, however much some might wish that this were not the case, Palestine is important, and cannot be ignored.” He called on the Security Council to “abandon the cruel false equivalence that . . . places the occupier on the same footing as the occupied, and that puts a nuclear-armed regional superpower on the same footing as a people that has never been allowed to enjoy self-determination.”

As Rashid Khalidi stated, when dealing with the basic needs of the people confined in Gaza, for instance, the Security Council should be “demanding – under penalty of sanctions, that the humanitarian and medical and dietary and other basic needs of the people of Gaza be freed of cruel political considerations, and that the collective punishment of 2 million people be ended.” The briefing dealt at length with many other aspects of the injustice and suffering inflicted by the Zionist enterprise. Khalidi told his audience that, “rather than bringing lasting peace, the efforts of the United Nations and outside parties in Palestine have all too often failed to prevent further war, displacement and misery.”

20 June is UN World Refugee Day. The Palestinian people have been denied their UN-recognised right of return for 73 years and they are still the largest refugee group in the world. Let us hope that, on the day, this year, world leaders and politicians will, together, reflect on recent and historic events and, at last, recognise the enormity of the crime against humanity which they have allowed to fester for so long. It is high time to begin the process of bringing Israel to account. Restore justice by putting an end to political Zionism’s narrow and cruel ambition.