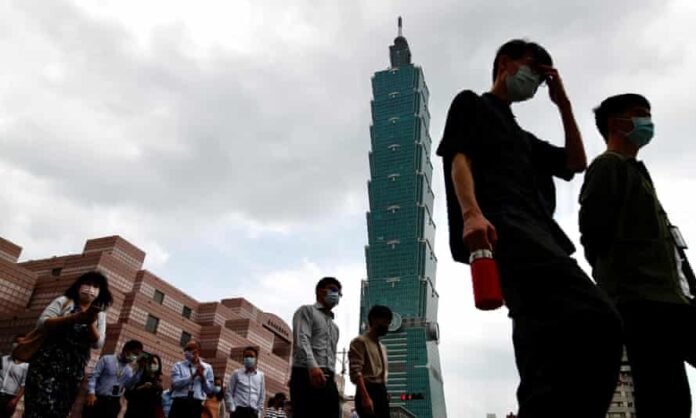 Unfortunate to hear this news out of Taiwan this evening, with Taipei moving into lockdown. They really had been (and in many ways still are) a singular success story for the Covid-19 pandemic.

However, reading this … my thoughts turned to various things that our own domestic right wing / opposition had come out with over the past few months. Because everything that went wrong with Taiwan’s response here (and it must be said – they’ve done very very well to get this far sans something like this eventuating), is something directly connectable to something somebody from National or ACT demanded we do.

For a start – this cluster in Taiwan appears to have kicked off due in part to the opening of a tourism travel bubble with a Pacific nation. Something that people in National have been jumping up and demanding that we do poste haste, because who could believe that there’d be any risk in opening up to Fiji, right?

For a second – the leap from quarantined air-crew to ordinary citizens appears to have taken place due to a privately owned hotel attempting to … do something I don’t quite understand around opening itself up for “air travel fans” who would like to sleep near an international airport so they can hear/see planes taking off. Not what one tends to be looking for in a hotel, but ok.

Now, I viscerally remember some from National opining that we should open the border to international students – and have universities responsible for the quarantine/managed isolation requirement management in their own hostels. The idea was to shift some of the burden from the Government’s MIF capacity on to private enterprise. Because of course, the profit motive means that there’ll be a significant financial incentive for any private sector (or likes to think it’s one in the case of the universities) operation not to screw up by doing something daft!

Which is not to say that we haven’t had our share of “how on EARTH did that happen?!” from our Government-run border facilities, of course – only to suggest that “just because it’s private, doesn’t mean it’s automagically more competent”.

For a third – we have heard a lot about Taiwan’s world-beating contact-tracing systems. I have no doubt that they have performed seriously well to this point. Hence why David Seymour was suggesting that if only we moved to more fulsomely emulate Taiwan upon this score, we could significantly abandon our current Covid-management strategy.

Except leaving aside the fact that ACT’s libertarian support-base would probably be hugely opposed to what they’d term a “surveillance state” (unless it was run by private enterprise, presumably) – the issue is that with this current cluster in Taiwan, it sounds like they’ve had some problems with their contact-tracing processes, to the point that potentially infected persons who were in the same hotel buffet-queue with infected aircrew were finding out from the news rather than being called up or traced.

Now this isn’t about gloating about what’s happening to Taiwan. Of course it isn’t. They’ve done well, they’ll likely continue to do well, and there’s much which every nation may learn from their success.

But it IS about pointing out that any system, any regimen CAN have gaps, shortfalls – and that the sorts of people back here in New Zealand who were attacking our own approach and claiming that if only we had emulated Taiwan (something we were and are, to be frank, not really in a position to do .. not completely, at any rate), we’d never have had a lockdown and could do all sorts of ramping-up-the-risk things like Pacific tourism bubbles or en-masse international student influxes …

Well, no, that’s not how it works.

It’s true to state, I suspect, that in various cases we’ve had where there were oversights with our own border management … we’ve been significantly luckier than the Taiwanese were here. We have definitely benefitted from luck. But contra to what certain grumpy voices in the media have recently sought to suggest – we have never been solely dependent upon it for our (relative) success.

Where problems have happened, and where containment has been breached – we’ve moved to constrain the virus’s spread and we have managed to do so with a thankfully limited human cost. Particularly following the end of the August outbreak.

I am sure that the Taiwanese shall endeavour to do the same.

All I can suggest is that we continue to improve our procedures and our processes – and remain vitally aware that caution, an abundance of caution as the Prime Minister put it back afore February’s ‘Valentines Day’ lockdown cluster-response, remains our watchword.

It is easy when one is successful to become complacent. And complacency leads to the unwarranted feeling that just because something hasn’t happened thus far … that axiomatically means that it isn’t going to happen in the future, even and perhaps especially when some fundamental shifts are made in what one is doing that alter the risk-profile in question. Like opening up to other countries, for instance.

I look forward to the broader rollout of vaccination here meaning that we don’t have to worry quite so much about individual border-control breaches.

Yet it must also be remembered, upon that score, that until there is a more pervasive vaccination of much of the rest of the world – we’re just buying time, effectively.

Time we MUST use to build up our own defences – and yes, quite probably, seek to more actively emulate the Taiwanese’ response-capacity in certain ways that are appropriate for us here.

Our thoughts are with Taiwan at this time, just as mine – personally – are currently with India.

Let us hope that they get back on top of things afore too long.