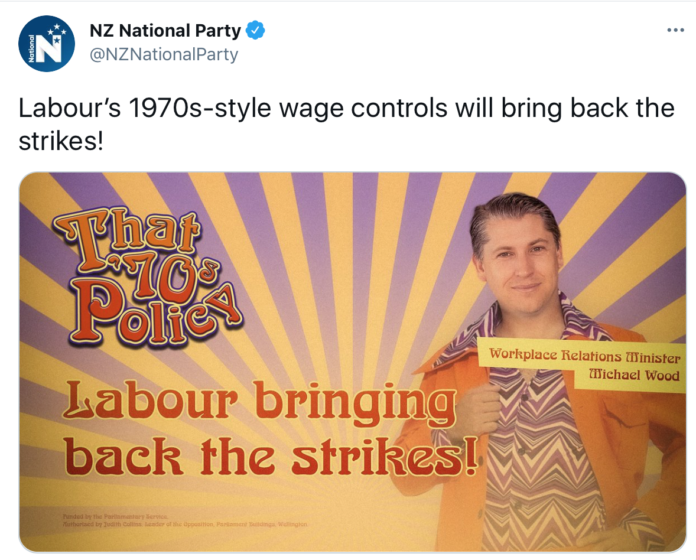 How do you announce universal unionism via the Fair Pay Agreement system and avoid the Right terrifying Kiwis into believing Labour are bringing in striking communism?

The timing of the two announcements this week was obviously no coincidence. In retrospect, it seems likely the Government ensured this relatively pro-worker announcement was preceded by a balancing anti-worker announcement, so Labour couldn’t be accused of being too leftwing or in the pocket of the unions and can keep Labour’s new-found and former National voters onside. Basically, the announcement was a way to “blue wash” the Government, selling it to conservative supporters, especially to inoculate Labour from business criticisms over the new fair pay agreement framework.

…it’s almost as if Labour strategists looked deep into the soul of their likely critics, put together a strategy that elicited the exact response you could predict from those critics, and implemented it ruthlessly.

The Bosses are furious…

With Fair Pay Agreements (FPAs) coming into force in 2022, Labour has been accused by National of being “stuck in the 1970s”, when a similar system was in place.

FPAs are a set of terms and conditions – including wages and working hours – which employers in a particular sector will be forced to abide by, with the overall aim of raising workplace standards.

…and hilariously, the CTU of course are huffing and puffing…

The Government is facing an enormous amount of backlash over its decision to freeze public sector wages and unions are demanding ministers come to the negotiation table and act in “good faith”.

Union leaders are gearing up to meet key ministers, including Prime Minister Jacinda Ardern, to attempt to reverse the changes.

“Don’t expect us to take this lying down,” CTU President Richard Wagstaff told the Herald.

Barely 10% of the NZ workforce are in a union and most of those are dominated by the Public Service.

Richard is going to walk away from the greatest recruitment opportunity in 35 years to reverse that appalling trend is is he?

The Government have just given the CTU the greatest roll back of neoliberalism in 35 fucking years with universal unionism via the Fair Pay Agreement system and Richard is going to die in a ditch for 100k gold plated Wellington bureaucrats?

The average wage in NZ is $53 000 – only the most delusional echo chamber free-the-nipple-militant-cyclist-vegan would think the public will come out in support of 100k gold plated Wellington bureaucrats.

The Government just handed over $250 000 to the CTU to help organise the new unions and you are going to reject that are you?

MPs are sacrificing their for 3 years with a Pay freeze, but your twitter mates in Welly don’t have to hu?

Helen Kelly would not have defended 100K pay packets for Wellington bureaucrats.

Luckily for Labour the screams from the Greens, CTU and PSA will cancel out the screams from the Business community and the middle electorate will act like Pavlov’s dog ensuring Labour hold their new National voters while implementing the most radical overhaul of worker rights in 30 years.