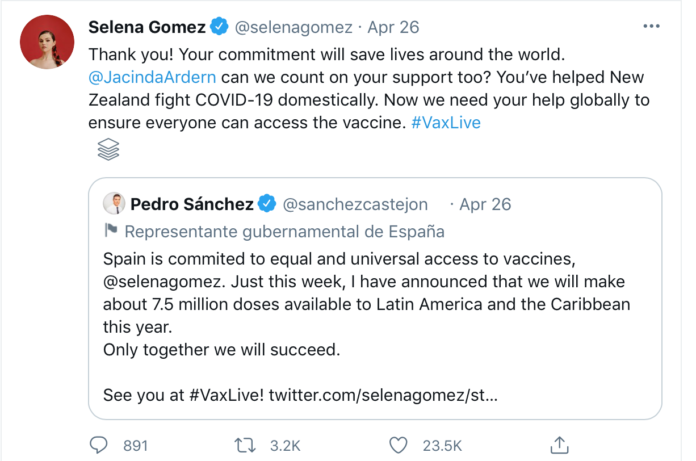 At the time of writing, Ardern had not replied to the 28-year-old pop star, but many Kiwis were quick to respond, with many pointing out Ardern had already taken action to ensure the vaccine would be available to New Zealand’s overseas neighbours.

“Selena. Our PM has this covered. Our govt has arranged vaccines for Pacific nations,” one irate tweet read.

“She’s already doing it,” said another.

“Yo girl! You do know that @jacindaardern and her government have already purchased enough vaccines to cover not only New Zealand but our Pacific neighbours?” a third asked, using the hashtag #onestepahead.

Another Twitter user suggested Gomez should “get her facts in order” before posting to her 65 million followers.

“In addition to the replies from NZ about providing for Pacific Nations, our PM, Jacinda Ardern has donated enough vaccine for 800,000 people via COVAX. Acknowledge this please,” they wrote.

What of course none of the tribal left bothered to ask was if Selena is right, which sadly she is.

Sure, NZ has purchased enough vaccine to help our Pacific Neighbours, but what we have refused to do is demand the Pharmaceutical Industry lift its patents for poor countries…

Advocates for a ‘people’s vaccine’ to fight the COVID-19 pandemic are disappointed New Zealand won’t be offering its support.

Developing countries, the World Health Organization (WHO) and a number of NGOs like Oxfam and Amnesty International are calling on the World Trade Organization (WTO) to loosen intellectual property (IP) rules so production of vaccines can be ramped up.

They say rich nations are using their wealth to buy up all the available vaccines – Canada for example has purchased enough to vaccinate its population five times over. India and South Africa have asked the WTO to waive patent rights, allowing cheap generic versions of vaccines to be made without fear of breaking international trade agreements.

…this despite the fact that 42 groups and respected experts have called on the PM to back the ‘Peoples’ Vaccine’.

So sure, we are looking after 800 000 others, but we are refusing to step up against the Pharmaceutical Industry and their IP laws.