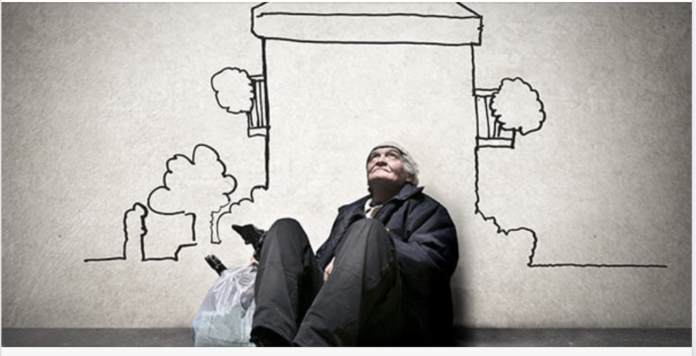 Last week I was filming outside the High Court in Auckland when a man approached me and asked if I would like to make a documentary about him because people might be interested in the fact that he was being followed by a ghost.

“Is it following you now?” I asked “because I can’t see it”

“Are you frightened of him?”

And with that he took some yellow chalk from the battered bag he was carrying and drew a shape on the footpath that look very much like a giant Pacman with a huge smile.

From the poor state of his clothes, his worn -out shoes, and generally unkempt appearance I wondered if he was homeless.

“Where are you staying?” I asked.

At which his whole expression changed from outgoing to suspicious, as if my question had flicked some switch in his mind, because he turned and walked slowly away.

Some years ago I made a documentary about the closing of the big mental institutions where people who were regarded as insane were sent.

There were many good reasons these places were closed down. Cruelty and abuse were common and also developments in chemical medicines made it possible for many people to be treated within the community.

In the course of making that programme I took one middle aged Maori woman back to the now derelict ward of the mental asylum where she had spent 20 years of her life but who was now looking after herself in a flat funded by the State.

I thought I was about to record story of how much better her life was as a result of closing the place where terrible things that had happened to her .

At which she turned away from my camera and stared out of the broken window next to which we were standing. After a moment she turned back to me and said

“You know. Bad things happened here but mostly it was good. There were happy times. I had friends. I had jobs to do”.

“..and I’ve never really felt safe living in the community.”

You might have noticed I used the word “ asylum” in a previous paragraph. When coupled with the word “mental “ it rightly conjures up images of places that were living hell’s where people with mental health issues were locked up.

But the word ‘asylum’ can mean ‘sanctuary’ – a place of peace.

And I do wonder whether, given our incredibly high suicide rate , whether we should be providing more places within our community where folk who have mental health issues are given the chance to take some time out to regain some peace of mind I order to better cope with the pressures of an increasingly stressful world.