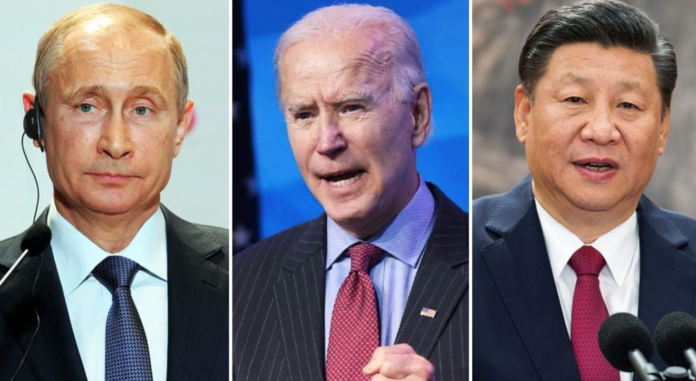 There are fears China and Russia could coordinate respective invasions of Taiwan and Ukraine, stretching the military resources of the United States and testing new President Joe Biden.

It comes as tensions mount in Crimea and Ukraine’s eastern Donbas region – where Russia keeps deploying more troops – and around Taiwan in the South China Sea, where the US is already responding to an increased Chinese military presence.

The US has warned that China is probably accelerating its plans to capture Taiwan. The two have had separate governments for more than 70 years, but tensions have increased in recent years and China has become “more assertive in sovereignty disputes”, AP reports.

Most recently, China shifted an aircraft carrier into disputed waters in the South China Sea after the US moved in with an aircraft carrier and an amphibious assault ship of their own which, among other battleships, are carrying hundreds of US Marines.

Over in Russian-annexed Crimea, President Vladimir Putin continues to amass troops amid sporadic clashes, prompting fears of a sudden escalation.

Simon Tisdall, a foreign affairs commentator, wrote in an opinion piece for The Guardian that while the increased tensions from China and Russia could just be a coincidence, a coordinated effort could push the US to the brink.

He writes that invasions at the same time would be an “Orwellian nightmare” for President Biden.

“While there is no evidence of direct collusion over Ukraine and Taiwan, presidents Putin and Xi are doubtless fully aware of each other’s actions, which have an identical, mutually reinforcing effect: putting the wind up Joe Biden’s untested US administration,” Tisdall said.

“What’s now unfolding could be portrayed as the ultimate fulfilment of George Orwell’s nightmarish vision, in his dystopian novel, Nineteen Eighty-Four…

“The Orwellian nightmare for Biden and the west would be a simultaneous Russian invasion of Ukraine and a Chinese attack on Taiwan.”

…we have always been at war with Eurasia and Eastasia?

If China and Russia stage military plays in the Ukraine and Taiwan, is Biden really going to go to war?

A country barely coping with Covid?

A country with voters who believe crazy bullshit… 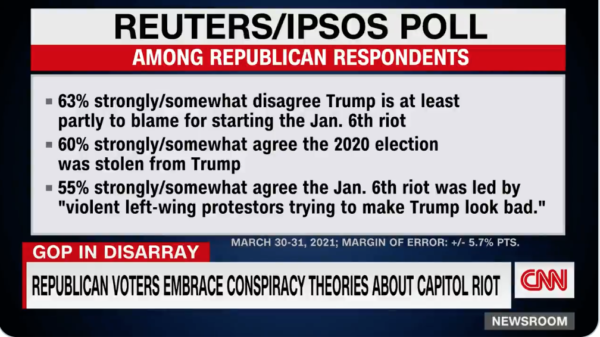 …is Biden really going to war for Taiwan and the Ukraine?

Most Americans can’t place those countries on a map!

Both Russia and China have deep unrest within their own nations and Nationalistic zeal for a nationalistic war would cement both regimes, so there is a lot to gain from such military adventures.

Meanwhile Israel is trying to goad Iran into military action…

The long-running and undeclared shadow war between two of the Middle East’s most implacable foes, Iran and Israel, appears to be heating up.

Iran has blamed Israel for a mysterious explosion at the weekend that knocked out power at its uranium enrichment facility at Natanz.

Israel has not publicly said it was behind what Iran calls “an act of sabotage” but US and Israeli media reports are quoting officials as saying it was carried out by Israel’s overseas intelligence agency, Mossad. Iran has vowed to take revenge “at a time of its choosing”.

…The slow drum beat for war continues to build. The question for NZ would be do we join America in any military response or do we pull back all our forces to protect the realm of NZ?