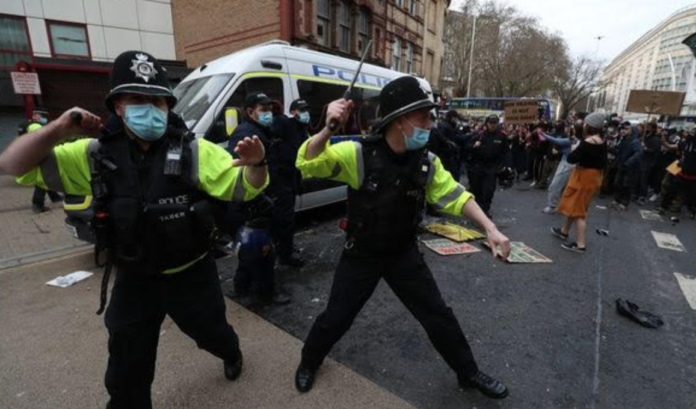 New Zealand is frequently a fast follower behind the UK in adopting all manner of awful policies so it’s important we note the broadside attack on civil liberties currently working its way through the British parliament.

The changes are so bad that a former chief constable for Durham, Michael Barton, has warned the laws move Britain dangerously towards “paramilitary policing” and that UK ministers are “flexing their muscles via their police forces” like repressive regimes around the world. This report says in part:

The police, crime, sentencing and courts bill, currently passing through parliament, will afford new powers to officers to tackle protests, including measures aimed at static protests and a new offence of “intentionally or recklessly causing public nuisance”, which is in part defined as causing “serious annoyance” or “serious inconvenience”.

So how does the UK government defend this broadside attack on civil liberties?

“People will still be able to protest, but they cannot be permitted to trample on the rights of local businesses and communities.

In other words protecting big business profits is behind these proposed law changes.

The most promising sign of popular revolt against the changes are protests with thousands marching and over 100 arrested in the latest demonstration.

The UK’s Tory government are always keen to point the finger at heavy-handed paramilitary policing in other countries which they claim are undemocratic and attack free speech but at home they are working to curb and control public protest with a broadside assault on democracy and free speech.

Police thuggery is already out of control in the UK with a Daily mail journalist caught up in the latest protest and batoned by police. The video of the incident is here.

There is no sign of such a law change on the horizon here in Aotearoa but as sure as night follows day police here will, sooner or later, want to replicate these laws as protests against inequality, climate change and mass extinction inevitably intensify.

We need to be ready.