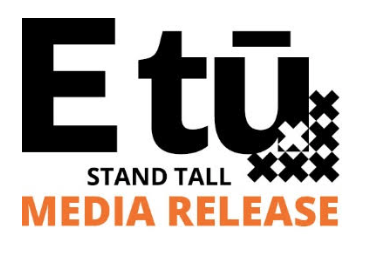 E tū welcomes the news that the roll out of the Living Wage to contracted cleaners in the country’s largest city has now begun.

From April 1, the first group of contacted cleaners at Auckland Council will now be paid at the current Living Wage rate of $22.10 per hour.

This follows on from the council’s commitment made in July last year to lift the pay rate of all contracted cleaners to the Living Wage rate during this term of council.

Today, Living Wage Aotearoa New Zealand also announced that from September, the Living Wage rate will increase by three percent to $22.75 per hour for 2021/22.

E tū delegate Josephine Wiredu, who has worked at the council as a cleaner for the past two years, says to now receive the Living Wage is a “dream come true”.

“We’ve been waiting since 2012 for this dream to happen, and now finally, it’s here to stay. It’s going to change our lives for good.

“We do appreciate the mayor, Phil Goff’s, concern about the Living Wage. We are most grateful.”

Josephine says now she’ll be on the Living Wage, she plans to cut back her 55-hour, seven-day-a-week work schedule, so that she can finally spend Saturdays and Sundays with her children – something that wasn’t possible before.

E tū Transformational Campaigns Organiser Fala Haulangi says the beginning of the council’s Living Wage roll out is fantastic news, made possible by the dedicated campaigning of E tū members.

“I’m just so proud of our E tū cleaners and everything they have done for the Living Wage Movement since it first launched in 2012.

“They have been hard out campaigning all this time, including speaking in the media and sharing their personal stories, and have even faced backlash for doing so,” she says.

“They made sacrifices because they believed in the bigger picture – not just for themselves but for their whānau and communities.”

Fala says E tū continues to be committed to seeing the Living Wage reach all contracted workers, including groups such as security guards.

“We applaud Auckland Council for the actions they’ve taken to reduce inequality in our communities, and we hope they don’t stop there.

“E tū will continue to campaign until all our lowest-paid workers are paid at least the Living Wage.”