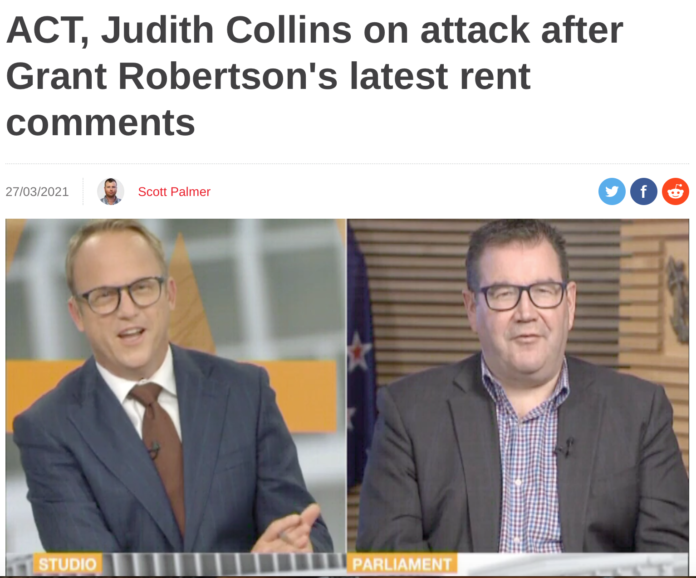 As the filthy scumlord property speculators flood social media with gloating threats of how they will punish renters by raising their rents to hurt Jacinda’s new property rules, Grant appears on The Nation to threaten them with new rent rise caps.

Hilariously this has National and ACT enraged.

ACT’s housing spokesperson Brooke van Velden says Finance Minister Grant Robertson has “dropped another bombshell on property investors” after failing to rule out putting limits on how much landlords can hike rents.

Following the release of the Government’s housing plan on Tuesday in an attempt to crack down on property investors, landlords have threatened they’ll hike rents to cover the loss.

Appearing on Newshub Nation on Saturday Robertson said “we’ll keep an eye on that” and didn’t rule out including caps on rent hikes.

Grant points out that the new rules don’t even take effect for 4 years, and is still available for new builds so the slumlord property speculators (who have been subsidised for decades with tax free capital gains, the housing allowance subsidy to renters AND tax loopholes) have no real reason to be aggrieved.

The vast number of property owners are owner occupiers so none of this impacts them and the vast number of Landlords are mum and dad operations who have real relationships with their tenants.

Which is why we must assume that this spiteful malice from the slumlord property speculators is genuine class warfare and that they will fulfil those threats with cold eyed  dedication.

We must go beyond threats of a rent cap, and instead demand the Greens step in and call for rent freezes and permanent tenancies that can only be ended by Tribunal for not paying rent and or damaging the property or by the tenant.

That Grant has had to go on TV and threaten this at all shows how sensitive Labour are to criticism from their own side.