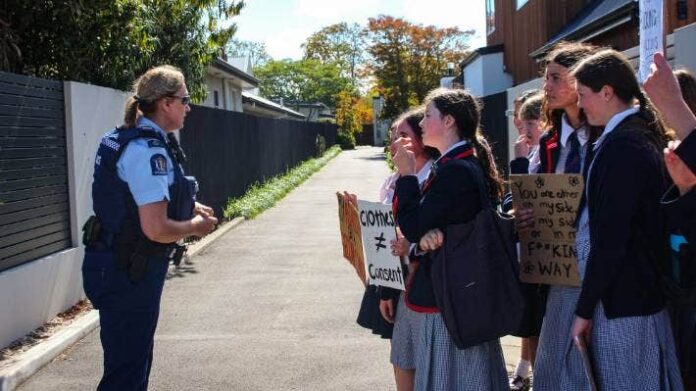 The Royal Commission into sexual abuse in state care is tackling some thorny issues, but none more so than the ritual abuse suffered by students at so-called ‘top’ boys schools, both public and private.

These schools brought with them the vicious practices of the ‘old country’, copying the uniforms, curriculum and habits of English private (public, as they are known) schools. The aping of cruelty was imported along with a number of other values, some praiseworthy (loyalty, striving), many which would make one cringe.

The revelations about Christ’s College and Christchurch Boys High School (the state school copying the model of the private, in the hope of some of that glitzy status rubbing off) are of practices copied from far-off places. Delightful things like fagging, the torture of new students and attacking young boys with broom handles in their private parts.

Physical and sexual abuse in boys’ schools are a way of asserting power, control and class status. It is something which is done ‘to’ the younger, weaker, less-protected by the older, stronger, higher-status boys, and sometimes by the masters, as they are euphemistically known.

This is what the boys were taught to do to one another, but indeed even the lowest of the low of them were deemed of greater status and importance than the highest woman on the class totem pole. The very forcing of hierarchies of power and pain among men forced women into subordinate roles.

In these rarefied circles, women were drudges who looked after the domestic and sexual needs of men, playthings to pleasure men and trophies for the best men to catch and show off like animals in a zoo.

And thus grew up a society in Aotearoa where the most valued parts of the education system taught, through what we educators call the informal curriculum, class power, sexism and, of course, racism, for few people of colour were admitted to those circles.

Eugenics, the ‘science’ of racial superiority, was taught in the classroom and lived in the halls of white male privilege.

The Inquiry has made it clear that there are plenty of men alive now who were the victims and perpetrators of such practices. Many had terrible experiences that marked them for life, and have bravely spoken up about it.

The question I want to ask now, though, is not whether the practices are still in place (as I cannot answer that), but whether the values that underpin them have changed. Are boys (some boys, anyway) in high status schools still primed for misogyny?

I am not even going to try to plumb the issues around sexual assault in Aotearoa. Much of it is still hidden in unprosecuted assaults and domestic abuse kept hidden. Occasionally the habits of a ruling class male pierce the mist as we see the battle for name suppression play out in court. Even more rarely, a Brierley or other such bloke is revealed as addicted to sex, even child sex videos.

What we saw in Christchurch last week was something a bit more unusual. Many of the students at one school, Christchurch Girls’ High, attempted to protest the values and culture of sexism at another, Christchurch Boys’.

The girls claim that there is widespread misogyny operating within the public spaces between the school that fosters sexual abuse, assault and rape. From systematic harassment on the streets and buses, to online bullying and name-calling, a gender war has erupted between the two schools.

I am aware of some of the more serious specific allegations, but I am not going to canvass illegal acts against young women in this blog. I know there are many low-level instances that make the female students change their routes to school and social practices. Nothing happens in a vacuum.

But I want to talk about Boys’ High, a school that advertises that it educates ‘fine young men’. While I am sure many of the students were supportive of the girls, hashtags such as #feminismiscancer and #mensrightsactivist are worrying. Is the Incel culture of women-hating active in that school? Are the girls at risk of gender violence?

One of the accusations is that the leadership of Boys’ High fosters the kind of values that lead to misogyny. The late Celia Lashlie did a lot of work with schools on bringing up “gorgeous boys into good men”, as she put it. More recently, Lesley Elliott, whose daughter was murdered by a misogynist narcissist (a very dangerous breed) brought the ‘Loves Me Not’ programme into schools, fostering discussion around the values that underpin sexual violence against women, and how to spot and avoid them.

So there is plenty of good models available to schools on gender relationships and good values. But running counter to that is the sporting culture (which values women, too often, at nil, while lauding the men) of high level competition and winning, and academic competition as well. In short, boys in the rarefied heights of high decile schools are subject to often competing messages. Not to mention the wider society and the role models it provides.

I cannot fault the girls for taking off at lunchtime to visit the Boys’ School and protest.

Neither can I fault the principal and police, worried about the girls’ safety, getting them back into school. It is tough stuff. It should not be up to the girls to fix this problem.

The onus lies with boys’ schools to ensure that in whatever state the boys arrive at the school, and no matter what the social influences, that at every level of the school the policies and practices of a fair, just and equal society are modelled. I have no doubt that many of them have a long way to go in that respect, but a few have achieved it. Erasing misogyny through excellent school practices is important work to achieve good lives in the twenty first century.