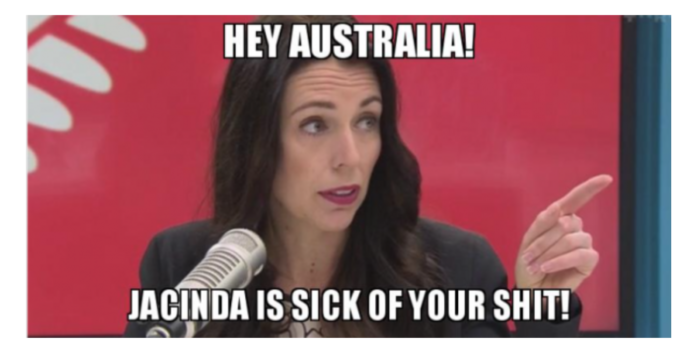 As the Covid plague starts a 3rd wave around the planet, as uneven vaccination rates undermine global health, as the wealthy nations stockpile and the poor countries dig graves, as mutations render the vaccine less effective – dumb Kiwis are slathering like feral dogs to open a new infection field by allowing the dirty Aussies here so fucking Quenstown can get some time on the slopes booked in bra!

Why the fuck after all we have been through would we willingly open ourselves up to infection from fucking Australia when we are still so far away from 75% herd immunity and barely have the vaccine in any Kiwi arms?

Let’s look at the winners and losers of this insanity.

Covid Virus – The Virus can’t believe its luck. All it has to do is wait for dumb Kiwis to be sick of not being able to fly to Bangkok and we will do the rest to ensure the bloody virus gets a holiday as well!

Queenstown – This venal capital of white privilege who have locked domestic Kiwis out of their little tower of babel has now forced the Government into opening our borders to Covid infection so they don’t lose all their Gold Card bonus points.

Death Cult Capitalism – They have had such difficulty forcing the slaves to work during a pandemic but are now gleefully trying to unpick Kiwi’s expectations of safety so they can get back to making money while we die.

Australian Government – They get to shift attention from their rape scandal by stomping their feet to get a travel bubble.

Jacinda – This is all risk for Jacinda. If the virus comes back and we are forced into lockdown, no one is going to give 2 shits about Queenstown’s fucking ski season!

New Zealand – WHY THE CHRIST ARE WE OPENING OUR BORDERS WHILE THE VIRUS IS STILL RAGING AROUND THE PLANET AND WE ARE NO WHERE NEAR HERD IMMUNITY!!!!!!!!!!!!

To push the above point, WHY THE CHRIST ARE WE OPENING OUR BORDERS WHILE THE VIRUS IS STILL RAGING AROUND THE PLANET AND WE ARE NO WHERE NEAR HERD IMMUNITY!!!!!!!!!!!!

No one is going to thank Jacinda if this turns to custard. My honest belief is there will be no bubble until we have a far higher vaccination rate in NZ and Australia and that won’t be until the end of the year.