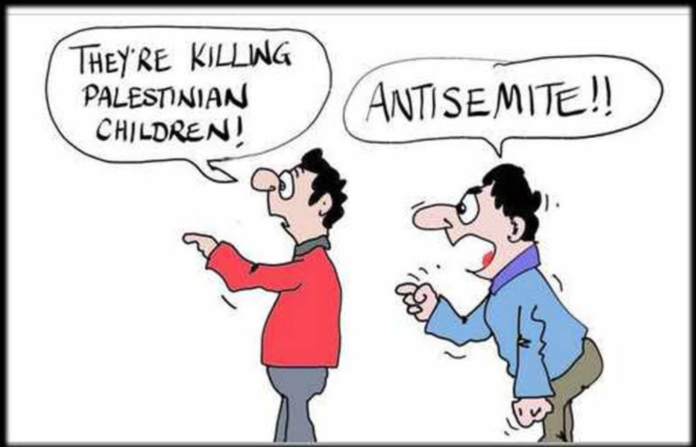 First, many thanks to Tony Greenstein for permission to use the cartoon seen above. Describing himself as socialist, anti-Zionist and anti-racist, Tony is a Jewish peace activist, mercilessly pilloried by supporters of Zionism for being a ‘notorious-antisemite‘. He has also been expelled from the UK Labour Party over allegations of ‘anti-Semitism’ because of his strong support for Jeremy Corbyn. The term ‘anti-Semitism’ is a potent tool of intimidation in the service of powerful state and corporate interests which, in some parts of the world, now demonstrates a terrifying ability to suppress free speech and banish reason.

On 8 March, Sh’ma Koleinu – Alternative Jewish Voices (NZ) published an article by Marilyn Garson, entitled The politics of name-calling, or, down the rabbit hole we go. This name-calling expresses itself through the weaponisation of the intentionally misleading term ‘anti-Semitism’, with ome defenders of human rights having lost their careers after being labelled ‘anti-Semitic’. The terminology is used constantly in efforts to paralyse movements that seek to bring a halt to over seventy years of crimes against humanity committed by Israel. Because the Zionist state commits its racist human rights abuses in the name of all Jews, world-wide, there is inevitable global resistance from Jew who say firmly, ‘Not in my name!‘ In December last year, a Jewish Voice for Peace Action webinar, which can be seen on JVP Action Facebook, discussed ‘anti-Semitism‘, sharing experiences and envisaging a “world where we dismantle antisemitism”.

The only way to really dismantle the power of the ‘anti-Semitic’ insult is to expose its deliberate separatism. Further on below, the nature of the term is examined more closely but first let’s look at its history. Israel’s official Declaration of Independence declares its Zionist origin thus: “We, members of the People’s Council, representatives of the Jewish community of Eretz-Israel and of the Zionist movement, are here assembled on the day of the termination of the British Mandate over Eretz-Israel . . .” The Israeli state is the result of politically-driven collaboration between British Imperialism and proponents of the 19th Century Zionist political ideology. At the start ot the 20th Century, the majority of British Jews were opposed to Zionism.

In 1917, when the British Government began to be attracted to the strategic advantages that Zionism offered, the only Jewish member of David Lloyd George’s Cabinet was adamantly opposed to the creation of a Jewish state. Sir Edwin Montagu objected to the Balfour Declaration and Zionism because he believed that the ideology was based on the premise that Jews and non-Jews could never exist as equals. In this, Montagu had the support of leading representative of Anglo-Jewry, the Board of Deputies and the Anglo-Jewish Association, together with three prominent British Jews: Claude Montefiore, David Alexander and Lucien Wolf. The Zionist website, Zionism-Israel Information Centre, describes as ‘fatuous’, Montagu’s criticism of apartheid Zionism, quoting from a document in which he forecast that “you will find a population in Palestine driving out its present inhabitants, taking all the best in the country . . .” History has, sadly, proved Montagu’s foresight to be tragically and absolutely correct.

The establishment of the State of Israel on 14 May 1948 was declared the moment the British Mandate terminated, although without announcing its borders. Zionism claims that, Jews have a human right to self-determination in their own nation-state. Can a global multiplicity of ethnicities and cultures who happen to share the same religion, either as a faith or simply in name, have the right to establish such a state at the expense of an indigenous population? Does Israel have the right to keep expanding its borders and seizing ever more Palestinian land? The expired Oslo Accords proved a disaster for the Palestinian people, having placed them as supposedly equal partners in ‘negotiations’ with a state that remains in belligerent military control over every aspect of their lives.

Over half a century of oppressive Israeli military Occupation should, by now, have led to the realisation that the Zionist regime intends never to abandon its ill-gotten territorial gains. It should also be plain that Israel has no intention of stopping its theft of ever more Palestinian land. The magnitude of the resources Israel has already invested in establishing its settlements and their associated infrastructure should make that reality abundantly clear. Add to that, the continuing land-grabs made by settlers and Occupation forces, and it should be clear that Israel is treating the West Bank as its own territory. It is no longer credible that peaceful and just negotiations with the Palestinians could ever result in Israel letting go of its massive investments. These territorial gains have been, and are being, achieved through the exercise of military superiority, coupled with a shameful immunity afforded by Israel’s powerful allies. Not including East Jerusalem, Israel has moved more than 440,000 of its Jewish citizens to the West Bank to live in more than 280 Occupation settlements and outposts.

According to the Israeli human rights movement, B’Tselem, the Zionist regime encourages “Jews to move to settlements and develop financial ventures in and around them. The state offers a slew of benefits and incentives to settlers and settlements, through both official and unofficial channels.” Among the most significant of these are the housing benefits that allow families lacking capital, or substantial sources of income, to buy homes in the settlements. For Palestinians, the Occupation’s geographical and economic transformation of the West Bank has proved ruinous. For instance, Israel has, over the past decade, enabled settlement outposts to seize thousands of hectares of Palestinian farmland and pasture. Under this regime, there is no possibility of sustainable development for Palestinians in their own land. Settlement land seizures, together with associated inter-connecting roads, fragment large areas and isolate Palestinian villages from each other.

On 11 March, in Masafer Yatta, Palestinian children gathering wild akoub, a plant similar to artichoke, on local farmland, were confronted by two masked settlers who threatened them and called out the Israeli Army. Unfortunately for the children, the land they were on had recently been seized by settlers from the Havat Maon illegal outpost which, so far, does not even have Israeli Government authorisation. Occupation forces obliged the settlers (see video) by seizing the children, aged from 8-13 years, and removing them to the Kiryat Arba settlement, where they were held for about five hours in a police station. The two eldest children have been ordered to report soon for interrogation by the Israeli Army. At present, according to Defence for Children International, 140 Palestinian children are being held in Israeli prisons. This is but one example of Israeli Army child terrorism – late last month an 8-year-old child and his brother, aged 10, were also treated abominably.

Regarding what is now called The growing issue of anti-Semitism in New Zealand, there is an urgent need for plain-speaking and revision of a terminology that contributes little to understanding. According to the Merriam-Webster Dictionary, Semitic means relating to “a subfamily of the Afro-Asiatic language family that includes Hebrew, Aramaic, Arabic, and Amharic”. The online Encyclopaedia Britannica notes that the most important Semitic language, in terms of the number of speakers, is Arabic.

That being so, use of the term ‘anti-Semitic‘ should relate to bias or hatred towards all native speakers of Semitic languages. However, Zionist ideology would have the term associated solely in relation to Jews. It is reasonable to ask, therefore, why do Zionists never say ‘anti-Jewish‘? The principles of democracy demand the right to free expression of arguments, for and against any movement. Jews who object to being associated with the crimes against humanity committed, in their name, by the Zionist enterprise share the same right to free speech as does the rest of humanity.

On 10 March, the Israel Institute of New Zealand (IINZ) published an article entitled Is NZ Labour more tolerant of antisemitism than Jeremy Corbyn’s UK Labour party? It condemns Labour MP, Dr Duncan Webb, for contributing to what it calls an ‘antisemitic’ Facebook group, Aotearoa Standing With Palestine, and that he “apparently sees all the vile comments and posts as legitimate criticism of Israel.” The article also note that the “New Zealand Jewish Council condemned Dr Webb for his promotion of the Boycott, Divestment and Sanctions (BDS) campaign”, even though it has worldwide Jewish support. The Israeli Human Rights movement B’Tselem totally reject the idea that BDS is anti-Semitic, stressing that “in fact, the BDS movement explicitly opposes all forms of racism, including antisemitism.” Other movements, such as Jewish Voice for Peace, also wholeheartedly support BDS.

The IINZ article failed to provide a single example of the anti-Jewish “hatred” that it accused Dr Webb of expressing and which its accompanying illustration insinuate. Besides condemning his support for BDS, the IINZ piece also found Webb’s hosting of a lunch for Mike Treen upon his return from the Gaza flotilla to be ‘anti-Semitic’. To support that assertion, the IINZ complained of misinformation regarding the military blockade imposed by Israel and what it called “attempted incursions onto Israeli territory.” Oh really! The IINZ shows no concern whatsoever when Israeli forces make incursions into Gaza, coming and going as they please. Can the IINZ really expect the world to see any kind of symmetry between the immense, militarily powerful and destructive Israeli blockade of Gaza and the occasional acts of Resistance to it? Last year, Israeli forces made over 40 Gaza incursions and already, this year, there have been a further 13, laying waste to precious land. On top of this, Israel has put large areas of Gaza farmland beyond the reach of farmers.

It has to be understood that dismantling the generally-accepted meaning of any word or expression is necessarily very challenging but words have, over time, been known to change their meaning. In the end though, it is how people choose to use or interpret them that determines their fate. In the case of ‘anti-Semitism’, it might help if opponents of Zionist human rights violations were to adopt a policy of never using the term without putting it in single quotes. Where there is an implication of anti-Jewish prejudice or hatred, it should be required of the accuser to say so, in clear and direct language. In other words, those who accuse others of being ‘anti-Semitic’ should be asked if they actually mean anti-Jewish. A growing practice of challenging the term ‘anti-Semitism’ could result in an increased public awareness of the full meaning of the term Semitic. We must hope that in time, the innate racism that pervades the practise of Zionist ideology will become so self-evident, it will no longer be possible to shield Israel from facing full accountability.