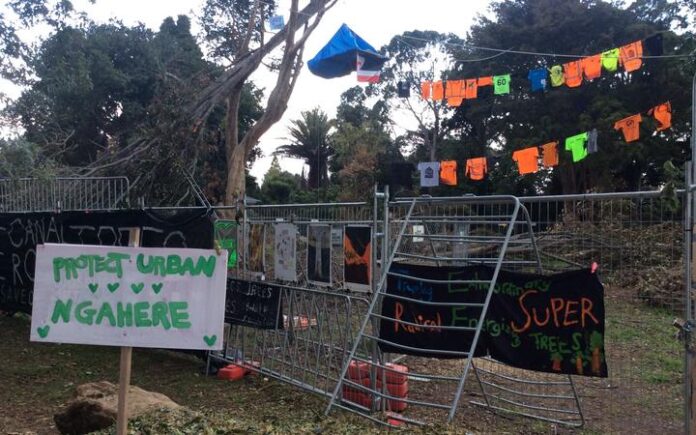 10 tree protectors suffering bruises, broken bones and carrying branches from the trees they tried to save will appear in the Auckland District Court at 9am tomorrow (Monday 15 March).

The 10 were arrested last Tuesday while attempting to stop the felling by developer Paul Macey of the remaining native trees at a Canal Road property in Avondale.

The 245 day community occupation of the property at 52-58 Canal Road came to a “heartbreaking” end on Tuesday when over 70 police and a score of security guards blocked the community from entering the site while Macey directed contractors to chainsaw the remaining native trees at the highly contested property. Over 24 trees were cut down or ringbarked that day including rare kawaka and black maire.

Despite suffering bruises and broken bones the 10, all charged with willful trespass, will carry branches of the felled native trees to symbolise their resolve to bring back general tree protection in New Zealand.

“We are heartbroken and devastated that this irreplaceable native arboretum has been destroyed but our resolve is stronger than ever to fight for a return of general tree protection so that this can’t happen again,” said arborist and tree sitter Zane Wedding who had his wrist and two fingers broken by heavy handed security, then was arrested on the day.

Long-time tree-sitter and arborist Hanna Luypers was forced out of the pohutukawa she was occupying on Tuesday as trees were felled around her and Daniel Raymond (son of landowner David Raymond) began chainsawing the stem of the tree.

“It was terrifying, but stronger than that fear is my anger at the failure of Mayor Phil Goff and Environment Minister David Parker to do anything to stop the wholesale destruction of trees across our city,” said Luypers.

Wedding and Luypers and the group Mana Rākau that arose from the Save Canal Road Native Tree protest intend to take their call for tree protection to Auckland Council and Parliament in coming weeks.