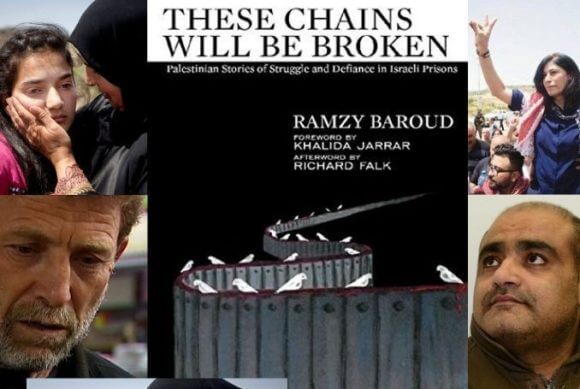 These Chains Will Be Broken is a collection of narratives by some of the many Palestinians, men, women and children who have been held in Israeli prisons.

John Pilger tells us , “With each story, there is a roll-call of the best of humanity: courage, struggle, determination, generosity, passion , humility and above all defiance of injustice.”

He adds that, “everyone, especially those of us on the West, subjected to unerring propganda, should read this searing and beautiful book”

The Foreword is by Khalida Jarrar, human rights actvist, feminist, elected Palestinian parliamentarian who has been imprisoned many times.

Well-educated herself, she tells of her struggle while in prison, to obtain formal educational opportunities for all prisoners, especially women.

Two of the stories that particularly moved me are that of the Galilean poet Dareen Tatour, arrested for her poem Resist My People, Resist Them and that of the youngest prisoner, Dima Ismail Al-Wawi, of the Occupied West Bank. Dima was 12 when she was ‘arrested’ by an armed illegal Jewish settler who claimed that she was trying to stab him. Her pleas, ‘I didn’t do anything’ were ignored by the military court. Female prisoners protected Duma, taking on the role of mother and older sister. Released after 2½ months, Dina shared this message with the world. “Please keep Palestine in your heart. Think of the children who are oppressed and will continue to be oppressed until this unjust occupation ends.”

I hope more people will read These Chains will be Broken. Personally I find it empowering , an insight into understanding that Palestinians will be free..free to live in a democratic one-State with equal rights for all, from the Mediterranean to the Jordan.

Several years ago, Martin and I met Claudette Habesch of Jerusalem Caritas, who said to us “Whatever they do to us, we will maintain our dignity.”

Rephrasing Dareen Tatour’s Resist My People, Resist Them, a well-known Palestinian phrase is the determination to “Stay Human.”

The prisoners’ narratives show us that even under horrific conditions, the Palestinians will ‘maintain their dignity’ and ‘stay human’.

We here in New Zealand should take up their cause.