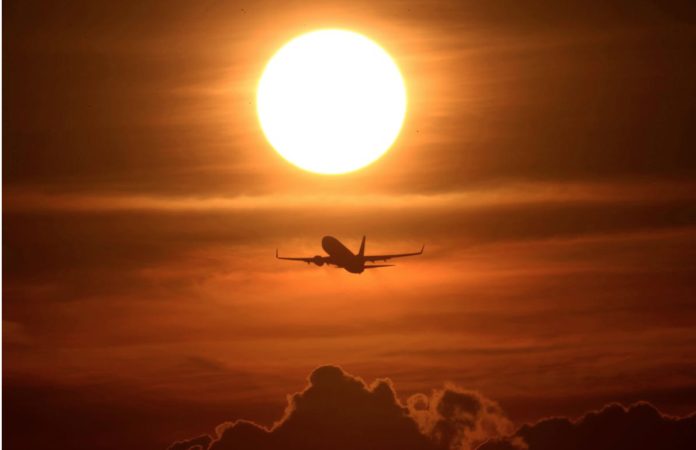 An OIA response from Ministry of Health (see below, under “Addendum”) has fuelled speculation that Air NZ flight crew cannot be eliminated as the cause of the Auckland August covid-outbreak last year and the current February-Valentines Day outbreak. The sources for both outbreaks remain unknown and officially designated as “under investigation“.

Finding a recent case in managed isolation and quarantine (MIQ) or elsewhere on the border that matched this cluster lineage would be strong evidence for the border incursion scenario. We haven’t got any such direct evidence – but this doesn’t mean it didn’t happen.

Extensive testing and contact tracing determined the earliest case found to date was an Americold coolstore worker who first showed symptoms on July 31, and the initial spread of the cluster centred around this coolstore, which imports frozen goods.

Thus, the third hypothesis is that the virus may have been imported on packaging material, where it could have survived in low temperature conditions, and then gone on to infect a worker at the coolstore.

This hypothesis is given further credence by the possible genomic link to Ecuador, since viral particles have been found in China on frozen shrimp packaging from Ecuador.

However, no shipments from Ecuador were received by the coolstore in question.

Coincidentally (?) there is also a branch of the company – Americold Logistics –  in Māngere.

In the case of the February-Valentines Day outbreak, Case B involved a worker from “LSG Sky Chefs in Māngere who worked at the laundry facility. Health officials believe she was the first to be infected but developed symptoms after her daughter and then got tested. She had not been at work since 5 February and how she became infected remains unknown. All members of staff at her place of work return negative Covid-19 testing results“. 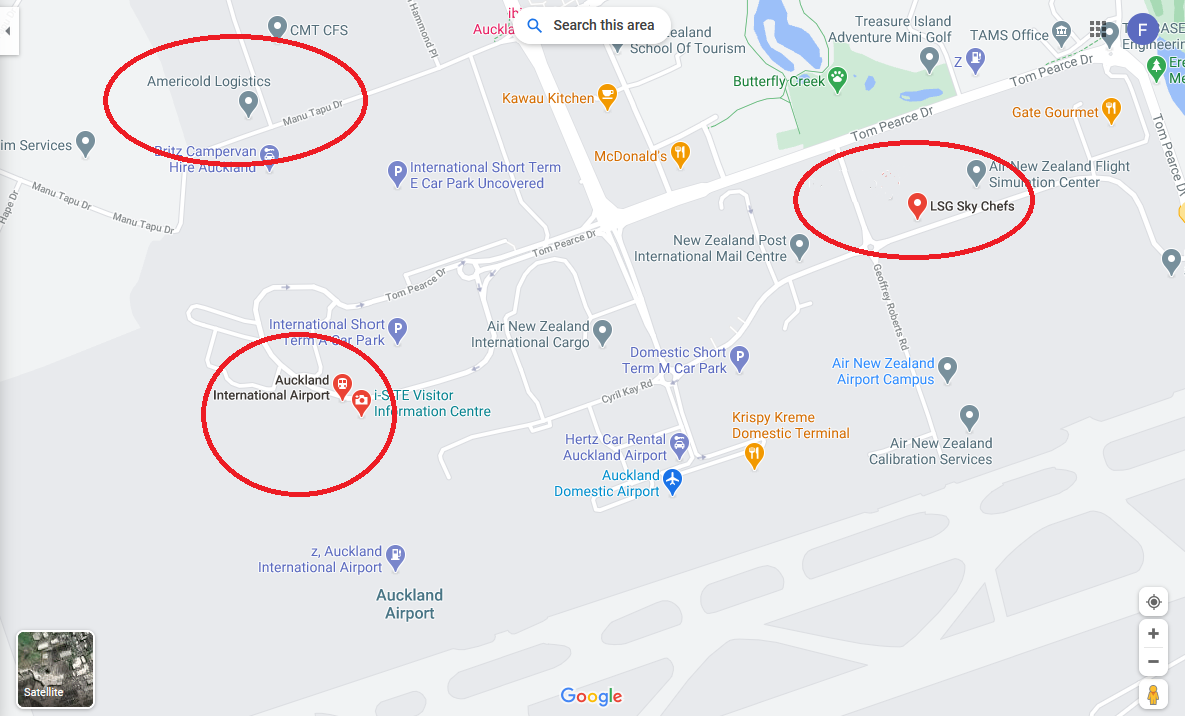 However, there was a missing piece: the location of a hotel used by Air NZ as an isolation facility for flight crews returning from international routes. Enquiries to Air NZ and elsewhere were met with a wall of silence. Flight crew’s safety and privacy were often quoted. (Though this does not feature as a concern for other Returnees and migrant essential workers staying at publicly-listed MIQ facilities, including a MoH webpage.)

Aside from the publicly revealed isolation facilities at Grand Windsor in down Auckland’s Queen Street and Ramada Hotels at Auckland CBD and Manukau – the location of an up-till-now secret facility in Māngere was a secret.

However, in a response to an OIA request from this blogger, it can be revealed that the heretofore un-named facility is/was the Heartland Hotel at 14 Airpark Drive, Māngere;

It is unclear if Heartland Hotel is still being used by Air NZ.

On 9 February, former Newshub and RNZ journalist, Zac Fleming discovered that Air NZ flight crews had been leaving their isolation facilities at Ramada Hotel at Auckland CBD and Manukau, and the Grand Windsor on Auckland’s Queen Street, to exercise regularly out in the streets.

It is highly probable that flight crews would also have done the same when in “isolation” at Heartland Hotel in Māngere.

In an Air NZ staff bulletin to crew, it was stated that Ministry of Health guidelines permitted outside exercise activity “… for up to 90 minutes of exercise per day.”  This was confirmed in an online MoH web-document dated 24 December 2020;

Aircrew are only permitted to leave their place of self-isolation:

to do any outdoor exercise

Flight crews were not held in MIQ for fourteen days. Rather, they were held in isolation for 48 hours and allowed back into the community after just one negative covid test.

“Of course a single negative test does not prove that a person is not infected, especially early in the course of their illness.” 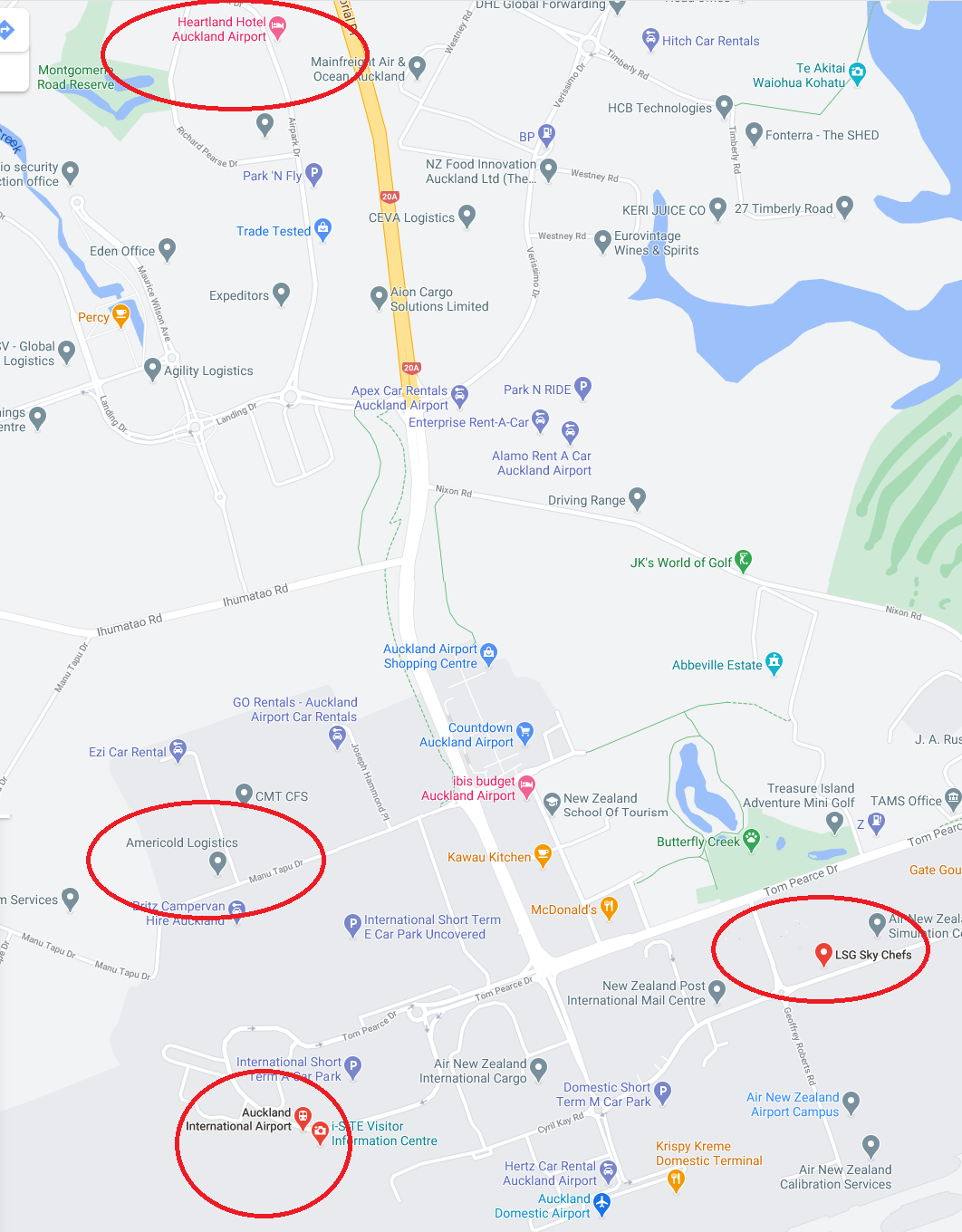 As this blogger suggested on 24 February – The close proximity of Americold to Auckland International Airport could be considered a coincidence.

But add LSG Skychefs to Americold and the International Airport – and there’s a pattern.

The close proximity of Heartland Hotel is one of the final two missing pieces;

Missing Piece 1: Is/was there a second Air New Zealand Isolation facility  within the LSG Skychefs – Americold – Auckland International Airport precinct? What was it’s location? And if it did exist; did isolating Air NZ flight crew members take their exercise outside the facility “as per the MoH guidelines you will be able to leave the hotel for up to 90 minutes of exercise per day”?

Missing Piece 2: Did an employee from Americold Mt Wellington (where covid infections were detected) have direct contact with the Māngere Branch, thereby placing themself at “Ground Zero”?

This blogger contends that a cascading series of events has resulted in returning Air NZ flight crew(s) initiating both the August Auckland and Valentines Day outbreaks:

There has been mounting pressure on this government for South Aucklanders (Manukau, Māngere, etc)  to be given priority for vaccination;

– but no one has asked the obvious question: Why is it necessary to vaccinate South Aucklanders first?

What has made South Auckland a target-zone for new covid outbreaks?

As an observant ‘Daily Blog’ reader pointed out; these outbreaks do not seem to be happening in Wellington, Rotorua, or Christchurch, where MIQ facilities also exist (but not Air NZ isolation facilities);

Genomic sequencing has eliminated MIQ facilities as being the source for the two recent outbreaks.

Yet, the virus had to enter Aotearoa New Zealand by some means. It didn’t arrive here by ‘spontaneous creation’.

Which leaves our national air carrier. And as this map shows;

– it cannot be a coincidence that all areas of interest are in close proximity.

Air NZ is allowed to operate because it is considered a critical infrastructure-service. It has less stringent isolation/quarantine requirements than any other regime operating. As the Ministry of Health explicitly outlined why Air NZ receives preferential treatment;

Because of the importance of maintaining international air routes, New Zealand-based international air crew are mostly exempt from a 14 day isolation or quarantine period as long as they meet certain conditions – both in flight and during layovers…

It would also explain why the Ministry of Health refused point-blank to disclose answers to these two questions I put to them;

“This part of your request is withheld under section 9(2)(b)(ii) as the release of this information would likely unreasonably prejudice the commercial position of the person or company who supplied the information.”

– makes no sense. It is unclear how crew infection rates could “unreasonably prejudice the commercial position”  of Air NZ.

But it makes total sense if the number of returning flight crews showing covid infections has increased significantly. That is not information which Air NZ management or the majority-shareholder – the government – would want in the public domain.

Especially if – as it seems likely – some returning infected flight crews were either not fully isolating (going out for exercises, jogging, walks, etc) – or their negative test results are worthless.

The sooner all Air NZ flight crews are vaccinated, the better for the entire country.

Because what other transmission routes could there be except Air New Zealand.

In a statement this evening, the Ministry of Health said the crew member had returned to New Zealand from Japan on 28 February and had initially returned a negative test result [my emphasis].

The person has since returned a positive test result today, after a swab taken yesterday during routine surveillance testing.

They have moved into Auckland’s quarantine facility today.

The individual’s three household family members have already been tested today and the results are all negative.

Fourteen other air crew who were on the same flight are being contacted, isolated and retested.

The MoH said a public health assessment showed there was low risk to the public, as Auckland was at alert level three during the time the case was back in New Zealand.

There is currently one location of interest – the Auckland Airport Countdown on 3 March between 12.07pm and 1.22pm.

Anyone who was at the store at the same time has been asked to monitor their health for the next ten days and get tested if symptoms arise.

Results from genome sequencing are expected on Tuesday and will help rule out any local transmission.

The new case comes after New Zealand marked a full week with no community cases, following an outbreak in South Auckland.

Let’s do the sums:

That’s five days out in the public, including a busy supermarket.

Covid testing picked up this case. How many did we miss?

NZ Herald: Covid 19 coronavirus – Why we may never know where Auckland cluster originated

Stuff media: Covid-19 – A guide to managed isolation hotels, and what to do if things go wrong

MoH: Requirements for aircrew ordinarily resident in New Zealand to reduce the risk of COVID-19 infection and transmission

The Spinoff: The ultimate guide to New Zealand quarantine and managed isolation hotels

Life in Level 2: The Curious Case of the Very Invisible Virus