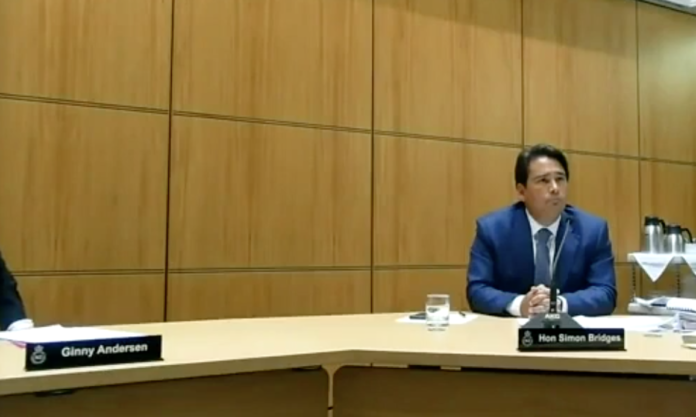 As predicted by TDB, Simon Bridges launched his campaign for the leadership of national with a rollicking attack on the Police Commissioner at Select Committee…

Police Commissioner Andrew Coster refused to take several attacks by National MP Simon Bridges lying down when he came to a select committee on Thursday.

The temperature of the exchange, which took place days after Bridges called Coster a “wokester”, got so heated that Bridges asked Coster to treat gang members as firmly as he treated members of parliament.

Bridges, the former leader of the party, earned a reprimand from leader Judith Collinsover his attack on Coster earlier this week, when Bridges called Coster a “wokester” with a “softly, softly approach”.

The attack came days before Coster was due to appear before the Justice Select Committee for the agency’s annual review.

…you can either read the insights here first or wait for the mainstream media to read it here and then write about it the next day.

The biggest mistake the Left and the Government could do right now is write off the concerns of those NZers being forced to live with the blight of the 501s. Those who have daughters sold into prostitution to work off meth debts, those who have had users suffer strokes or brain bleeds or those who are forced to commit violent Dairy robberies to pay for the debts.

The tsunami of meth is devouring communities and while it has seen persistent focus over the last 6 months by Police targeting the 501s, the damage in the communities left behind is still convulsing.

Bridges knows the pain erupting throughout those communities and for them his criticism drenched with culture war references will ring true in a way the Left’s mocking and Jacinda’s head tilt concerned look routine can’t and won’t.

Judith Collins realised what Bridges was doing, told him off and then immediately tried to take the same tough on crime rhetoric.

3 – It doesn’t focus on the actual problem – the 501s: The point I was making in the interview with Mark Mitchell stands, the generator of this recruitment drive by the domestics is the sudden importation of 1500 501s from Australia who are prepared to use a level of criminal violence and sophistication well in excess of what the domestic gang landscape will cause. There’s no point in harassing the Mongrel Mob or Black Power or even the Headhunters if the 501s are the reason they are bulking up to protect their turf. A myopic focus on the 501s is what is required here, not some broad stroke get tough on crime rhetoric that lacks nuance because it’s aimed at triggering voters using lazy stereotypes.’

The problem for the Left of course is that intelligent policing as Coster is attempting to embark upon all relies on explanation and discussion when those who are hurting simply want revenge and zero tolerance of a threat that grows by the day.

Labour strategists are going to have to do more than gang busts to take the fury out of those communities bearing the brunt of the gang war and meth explosion. A vast drug rehabilitation program using the profits from a taxed and regulated cannabis market would be the easiest way to heal those communities but the Labour Government are such gutless and spineless cowards they refused point blank to do anything about that didn’t they so they can reap what they sowed while Simon Bridges makes hay.