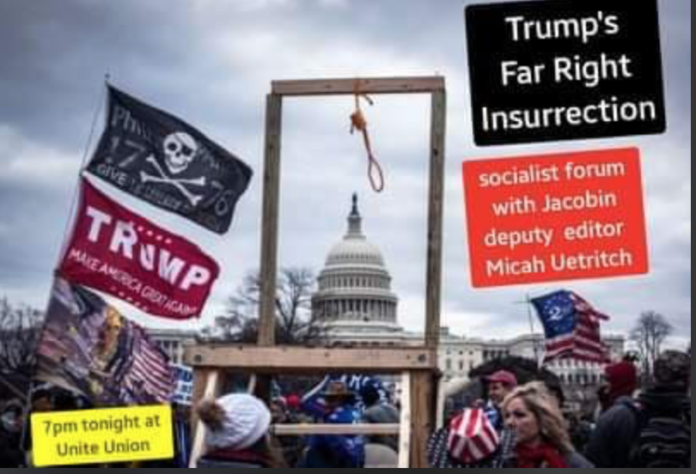 Kia ora comrades, we are happy to announce that we will be joined this evening by the managing editor of Jacobin magazine, Micah Uetricht. Micah has kindly agreed to stay up very late to discuss this important issue, as it will be past midnight in the U.S.! If you can’t make it in person please join us on zoom:

On January 6th 2021 thousands of Trump supporters, many associated with the QAnon conpiracy theory, stormed the U.S. Capitol building in what appeared to be a failed attempt at overturning the election result, culminating in the deaths of 5 people. In stark contrast to the show of force directed against the BLM movement in 2020, the protesters faced little resistance, and were directly encouraged by Trump himself.

How can Marxists understand the conditions that led to these events, in contrast to the liberal analysis that would paint QAnon followers as terrorists, with Biden and the Democrats the defenders of democracy? Is this fascism or the logical end point of neoliberal policies and social media rabbit holes?

Is it masking deeper systemic issues such as racism, unemployment and widespread alienation, and how should the left strategically engage with the issue? Finally, should we applaud the deplatforming of Trump from social media, or is this something to beware of? Join Socialist Aotearoa for a public meeting to discuss this Thursday at 7pm.