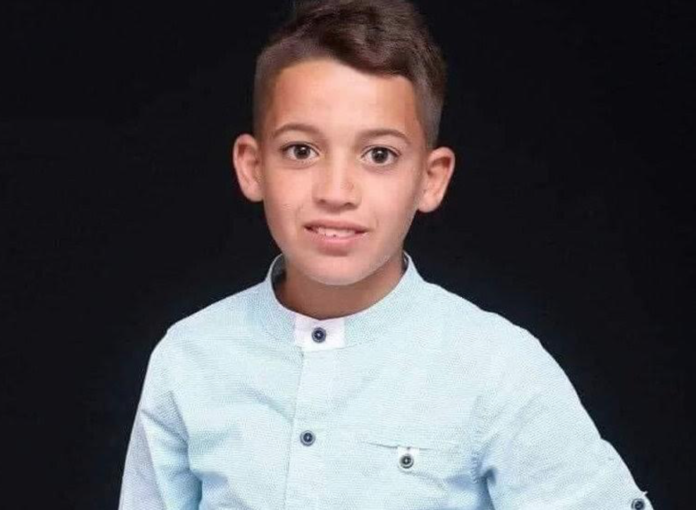 His  mother spent the morning baking a cake and preparing Ali’s favourite dish for a evening birthday celebration with Ali’s friends.

As it was a Friday, people gathered in the centre of al-Mughayyir, their West Bank village, for a regular weekly protest against their village land being stolen by settlers.

After about 3 hours, an Israeli sniper shot Ali in the abdomen, “from a distance of around 160 meters, we estimate”, his father  said. The father believes that  his son was targeted by an Israeli sniper, who “wanted to kill.”

“The people who witnessed it said that the second Ali fell to the ground, the Israeli soldiers retreated and the confrontations were finished. That’s what they [the soldiers] wanted, they just wanted to kill someone and go home.”

The boy was take by car to a nearby villge and then by ambulance to a  hospital in Ramallah, some 30 kilometres away. But doctors were unable to safe him.

Another Palestinian child was killed by an Israeli soldier.

Not a big deal, not newsworthy except in a few alternative media outlets. I found this story, written  by Yumna Patel on  the mondoweiss.net website.

There will be no follow-up. The Israeli forces know they can kill with impunity.

According to Defense for Children International-Palestine (DCIP), Ali is the fifth Palestinian child to be killed with live ammunition at the hands of Israeli forces this year. He is the second minor to be killed in the village of al-Mughayyir since 2018, when 16-year-old Laith Abu Naim was shot and killed after  he threw a stone at an Israeli military jeep.

Why is the West so silent? Why is there no justice when the victims are Palestinians?

Maybe it is something to do with an issue we here in NZ are starting to discuss, the underlying concept of white supremacy, some people’s lives are of more worth than the lives of others’.

Israelis see themselves, and portray themselves,  as  Europeans.  Geograpically Israel is physically in the Middle East, but mentally in Europe.

The concept of European superiority is part of our historical cultural heritage.

Churchill speaking to the Peel Commission of Inquiry of 1937 was unapologetic about the violence of British troops , Zionist auxiliaries and Royal ‘air force bombers in crushing a  Palestinian uprising.

” I do not admit that a wrong has been done to these people by the fact that a stronger race, a higher grade race, a more worldly-wise race, to put it that way, has come in and taken their place.”

Maybe we are all unconsciously indoctrinated with what the Palestinian-American intellectual Edward Said described as ‘orientalism’, a determination not to know anything about the other’s, history, tradition and  culture.

There clearly is a reluctance on the part of Western media , political, and religious elite to  criticize the Israeli regime even when children are shot by skilled Israeli snipers using the latest high-tech weaponry. Is it fear of being targeted by Zionist supporters?

Where is humanity? How many more Palestinian parents will have to grieve as Ali’s do?

“He was our most beloved boy, and brought joy to us and everyone around him.”