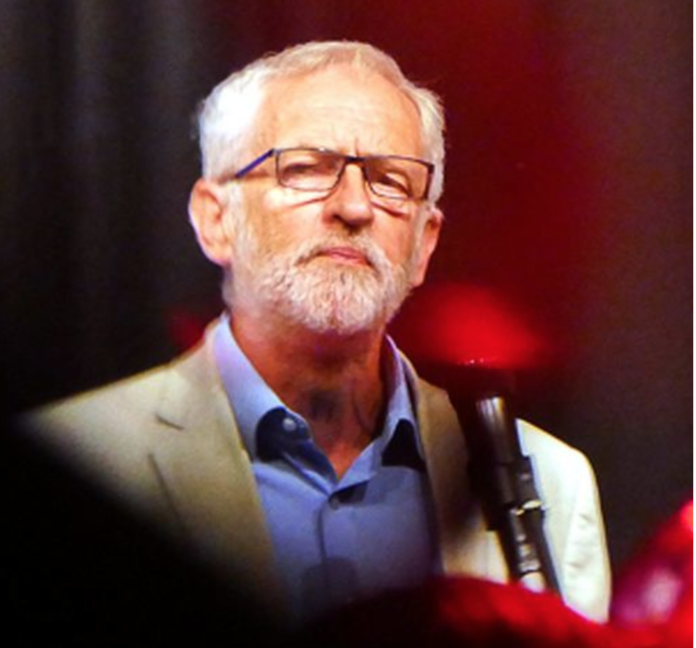 The hate-filled and indefensible attacks, waged by the Zionist lobby and its hangers-on to silence critics, relies utterly on falsehoods and the suppression of truth. In this, it is aided and abetted by the mainstream news media and timid politicians. The Zionists pretend to speak and act on behalf of the global Jewish community but the voices of Jews wishing to counter the lobby’s propaganda are hardly ever allowed to reach the public.

In November last year, the outgoing Jewish Speaker of the House of Commons and former Conservative MP, John Bercow, said in an interview (57 minutes in) with British GQ magazine last month: “I myself have never experienced anti-Semitism from a member of the Labour Party, point one. And point two, though there is a big issue and it has to be addressed, I do not myself believe Jeremy Corbyn is anti-Semitic.” Bercow also told the interviewer: “I’ve known him for the 22 years I’ve been in Parliament. Even, actually, when I was a right-winger we got on pretty well . . . I’ve never detected so much as a whiff of anti-Semitism.”

There is a shocking video (about 40 mins in) in which a Sunday Telegraph columnist, Simon Heffer, claimed with absolutely no proof, that Corbyn “wants to reopen Auschwitz”. When the interviewer responded that such an accusation was completely unacceptable, Heffer replied: “I’m sure, in 1933, they had similar conversations in Germany: “the Fuehrer’s never going to do that”. The Jewish philosopher, Noam Chomsky (famed American linguist, cognitive scientist, historian and political activist) responded to the shameful nature of these remarks: “The way charges of anti-Semitism are being used in Britain to undermine the Corbyn-led Labour Party is not only a disgrace but also – to put it simply – an insult to the memory of the victims of the Holocaust . . .”

In an article published by the Israel Institute of New Zealand (IINZ) on 12 September 2017, an anonymous Shalom Kiwi writer asks, “why is Jeremy Corbyn such a toxic name in Jewish circles?” The piece then continues: “He  participated in a wreath-laying ceremony at the grave of one of the terrorists behind the massacre of 11 Israeli Olympic athletes in Munich in 1972.” The intention of this, clearly, is to imply that Corbyn was sympathetic towards anti-Jewish terrorism. Nothing could be further from the truth. The Guardian quoted Corbyn as saying: “I was there because I wanted to see a fitting memorial to everyone who has died in every terrorist incident everywhere because we have to end it. You cannot pursue peace by a cycle of violence; the only way you can pursue peace [is] by a cycle of dialogue.”

The wreath-laying actually took place in 2014 at an event, honouring those killed by an Israeli air strike on the Tunisian capital in 1985, that had targeted the Palestine Liberation Organiation’s (PLO) offices. A large proportion of the dead were “women and children, many of them Tunisians,” according to a New York Times report on the incident. At the time, the Tunisian Ambassador to France, Hedi Mabrouk, called the strike “state terrorism” on Israel’s part. In 2018, as part of the anti-Corbyn campaign, Israeli PM Benjamin Netanyahu accused the Leader of the UK Labour Party, via Twitter, of having laid a wreath on “the graves [ic] of the terrorist who perpetrated the Munich massacre.”

And who was this ‘terrorist‘? The first thing to note is that there is no evidence to show that Atef Bseiso, actually committed any terrorist crime. Bseiso was the Head of Intelligence for the PLO and he was assassinated by Israeli terrorists while working as liaison officer for the PLO with Western intelligence agencies in Paris. Bseiso‘s death came at a time when the PLO was actually sharing intelligence information with Western countries to help oppose terrorist operations hostile to Western interests. According to the Washington Post, Bseiso’s murder stunned Western intelligence agencies, especially as this was the third killing of a chief PLO intelligence liaison officer while co-operating with Western agencies. The paper reported that “judging by the professionalism of the carefully planned slaying, Middle East specialists – Israeli and Palestinian – said the most likely suspect is Israel’s overseas intelligence agency, Mossad.”

Bystanders had described the killers as “European-looking” with short-cropped hair and wearing black jogging suits. They shot and killed Bseiso at point-blank range on his return from a late-night dinner at the Left Bank hotel where he had registered under an alias. Running off into the night, the agents left behind a handgun fitted with a silencer and a bag to catch the spent cartridges, a technique designed to hamper ballistics investigation. Israel and its Mossad agency have little respect for sovereignty, be it Palestinian or any other. One example is Mossad‘s drugging and abduction of an Israeli citizen in Italy. In New Zealand, in 2004, Mossad agents breached “New Zealand sovereignty and international law”, as Prime Minister Helen Clark put it, by fraudulently attempting to acquire a New Zealand passport, using the identity of a man with cerebral palsy.

In any case, Netanyahu’s nauseous denunciation of Jeremy Corbyn’s attendance at the wreath-laying ceremony for the victims of an Israeli air strike is hypocritical considering that, in 2018, Netanyahu himself had spoken admiringly about the notorious terrorist leader Menachem Begin in an address he gave at the Menachem Begin Heritage Center. He spoke of the presence of two documents at the building: “One, President Truman’s historic recognition of the Jewish state; and right next to it, President Trump’s historic recognition of Jerusalem as Israel’s capital.” The Israeli Prime Minister told the assembly that Menachem Begin “serves as an emblem and as an example for future generations, because the battle is never over. Begin understood that security comes first.” Begin was leader of the Irgun terrorist group that in 1946 set off a bomb in a hotel in Jerusalem that killed 91 people. In 2016, an article in the Israeli newspaper, Haaretz, gave recognition to the fact that the bombing of the King David Hotel was an “act of terror”.

In an interview with Jewish News, Jeremy Corbyn told the newspaper: “I’m not an anti-Semite in any way, never have been, never will be. I’ve opposed racism in any form all my life. It’s the way I was brought up, it’s the way I’ve lived my life.” He went on to describe ‘anti-Semitism‘ as “a cancer in our society” that had to be “challenged at every single stage.” As directly and clearly as possible, Corbyn expressed his abhorrence of all forms of discrimination, saying “we want people to understand what it is like to be accused of something because of your ethnicity, because of your faith, because of where you come from. It is very hurtful but also very dangerous and corrosive to our whole society. So today I say quite clearly, anti-Semitism is completely wrong, as is any other form of racism.”

On Twitter recently, Juliet Moses, spokesperson for the NZ Jewish Council, asked, “Is anyone going to try and defend this revolting The Daily Blog piece riddled with antisemitic tropes: 1) Jews as Christ-killers 2) Jews as a virus 3) Jews making up bogus allegations of antisemitism and pulling the strings to advance a neo-liberal agenda.” In reality, Bradbury’s article made not a single reference to Jews but it did target the crimes against humanity that Zionist Israel commit in the name of Jews.

Another way to describe the persecution of Jeremy Corbyn is to liken it to a witch-hunt. Completely devoid of reason and justice, this revival of the Inquisition should wake us all up to the dystopian future that Zionism’s investors would impose upon the world. People who join with Jews in Israel and around the world in their condemnation of the Zionist regime’s racist violations of human rights cannot credibly be branded as racist or anti-Jewish. Misleading Zionist propaganda relies on half-truths and rumours, manipulating language at every turn.

It is Zionism that is racist – let’s ask Juliet Moses if she, or anyone else, can defend the latest barbaric example of Zionism in practie: The Israeli Army destroyed 11 Palestinian family homes and tent dwellings, as well as 64 facilities belonging to them. These included water storage tanks, livestock shelters, mobile bathrooms, solar cell power generators and two agricultural tractors. As the UN Humanitarian Co-ordinator for the Occupied Palestinian territories, Yvonne Helle, explained: “demolitions are a key means of creating an environment designed to coerce Palestinians to leave their homes.” Then, of course, there is the constant persecution of Palestinian olive harvesters.

Should the above still leave room for doubt in anyone’s mind as to the foul and ugly purpose that drives the Zionist enterprise, then ask any Zionist if they can defend Israel’s cruelty and criminal abuse of Palestinian children outlined in this Save the Children (SCF) report: The impact of the Israeli military detention system on Palestinian children. This subject has, for years, already been reported on by the UN and human rights groups but this latest evidence has been described as “a searing indictment of the Israeli authorities, and a worthy addition to the voluminous but damning high-quality research into this issue.” Imagine the mainstream news media headlines and outrage if Israeli children were being awakened during the night and seized by foreign occupation soldiers to be taken hooded or blindfolded from their homes. Israel is the only country in the world that ethnically selects children for prosecution in military courts.

It should be plain that success, for the Zionist enterprise, depends upon lies, suppression of freedom of expression and terror. If this corporate-funded movement achieves its ultimate goal, we will find ourselves consigned to a world based upon absolute population control. The groundwork for this has been exercised for over 50 years already in the Occupied Palestinian West Bank and Gaza. Many would say it has been for much longer than that. We live in strange times. To survive we must defend freedom of expression and human rights. The key to that is opposition to Zionism and holding Israel to account – while there is still time.