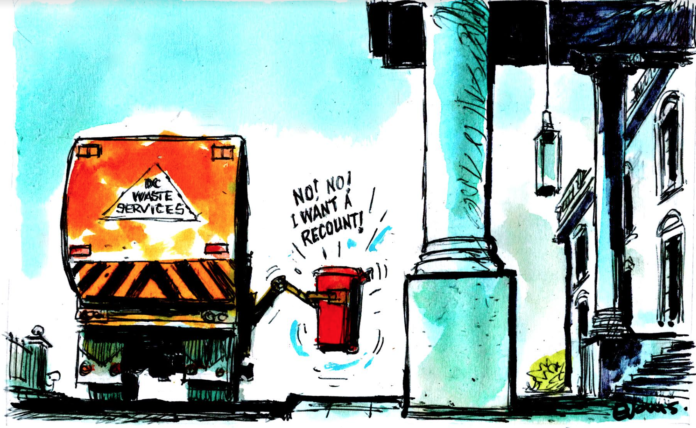 The US election didn’t deliver the resounding rejection of Trumpism we might have hoped for. Anti-immigrant nationalism still resonates with many Americans. The public sentiments embodied by Trump which saw him initially elected as President haven’t gone away just because he was a Presidential fool. The violence and disarray in America’s public health system, police force and criminal justice system, violence on the streets and in communities, normalised in American culture, show that racism and intolerance are institutionalised, beyond any Presidential figurehead. But those institutionalised values also represent a large body of the American politic who voted for Trump again last week and who threaten to reject the election outcome over coming days.

Even at its resolution, the US election continued to deliver bizarre moments. From Trump’s media conference at the Four Seasons Landscaping Supplies carpark next door to an adult video store and across from a crematorium (what sort of metaphor is that?), to Kamala Harris and Joe Biden’s address to the nation – all dressed in matching black masks, and speaking to a crowd socially distanced-by-car. Ain’t that America? Trump’s Presidency and the election have been black comedy and farce at every turn.

It’s a celebrated moment that sees Kamala Harris, the first black woman Vice-President elected, after 92 white men in the Presidential office since 1798. It took 131 years for women to be allowed to vote in the United States, and a further 45 years for African Americans to be allowed their right to vote too. It’s about time a black woman had access to higher office. Farrah Tomazin notes in the Sydney Morning Herald that from Barack Obama, to Bill Clinton and Jimmy Carter, there has not been a Democratic presidential nominee in over 40 years who has won the White House without the support of black women.  After this election, women will fill a record of (at least) 131 of 535 seats in the House and Senate but only 49 of them are women of colour. So the election of a coloured woman as Vice-President is an achievement indeed. But it will take a lot more Kamala Harris’ before American political economy and society offer equality for women more broadly, and for black women in particular.

New Zealand politicians have proudly shared photos of themselves with the then Vice-President, now President-elect Joe Biden from when he visited New Zealand in 2016. “Sleepy Joe” is no Barak Obama in the rhetorical stakes, he’s no Bill Clinton in the charm. But he’s no Donald Trump in the reckless, unhinged hazard to America’s reputation and global security. And with Donald’s defeat, around the world, observers have cried, sighed and cheered in relief.

Joe Biden promises to unify, to govern for those who voted for him and those who didn’t, to restore the soul of America.  Given the divided American population, and the finely balanced Congress, Biden is wise to seek peace between Republicans and Democrats. He highlights the challenges of “The battle to control the virus, the battle to build prosperity, the battle to secure (family) healthcare. The battle for racial justice and to root out systemic racism… And the battle to save our planet by getting climate change under control”. He said, “Tonight, the whole world is watching America. And I believe that at our best, America is a beacon for the world. We will lead not only by the example of our power, but by the power of our example.” -Let’s not forget there’s always an American iron fist in any velvet Presidential glove.

Remember when Barak Obama inflamed the imagination of a whole new generation of voters, with his claims of ‘yes we can’, and dreams of hope? In this election, voters have again endorsed hope, though maybe on a more modest, slightly jaded, scale. America needs more than a change in Commander in Chief. It needs more than promises and rhetoric. It needs more than charm and hope and a black woman Vice-President. But in the face of the crisis of capitalism, climate change and coronavirus, and after four years of Donald Trump, the whole world is desperate to believe in better.