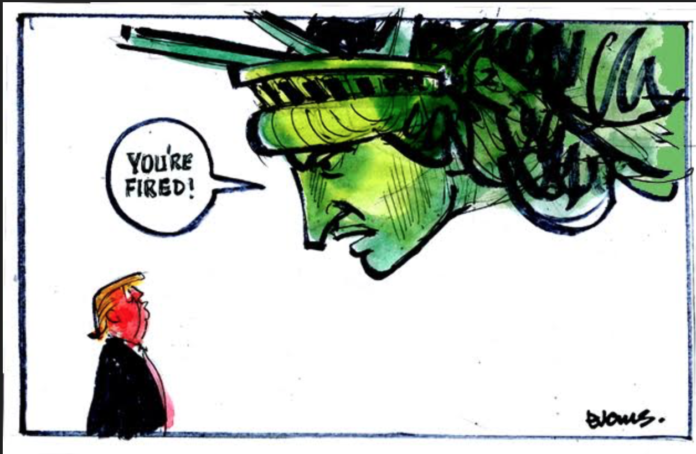 So here’s what’s going to happen. Assuming there’s not some sudden eleventh hour reversal with the count … the Trumps and the Trump wing of the Republican Party are going to find themselves escalatingly high-and-dry with regard to the rest of their own party.

We’ve already seen quite a bit of this with even some of the President’s own previously pliant supporters refusing to echo his claims and stances over the past 36 hours – or outright distancing themselves therefrom.

Now, there are a few reasons for this, of course – including the fact that some of those rhetorical flourishes on the part of the President are rather … fraught in their relationship with reality, during the high-sacred hallowed event of the American civic religion.

And also, I personally suspect, because various Republicans are in fact not entirely displeased with the way things have overarchingly turned out – more on that in a moment.

But what this is setting up is a “Stab In The Back” myth. Much like the one prevalent in Germany following World War One. Wherein regardless of what the facts of the matter may or may not have been upon the ground – a festering belief takes hold that it was the President’s *own side* that let him down, rather than the President’s demands being overtly unfeasible or even outright illegal. 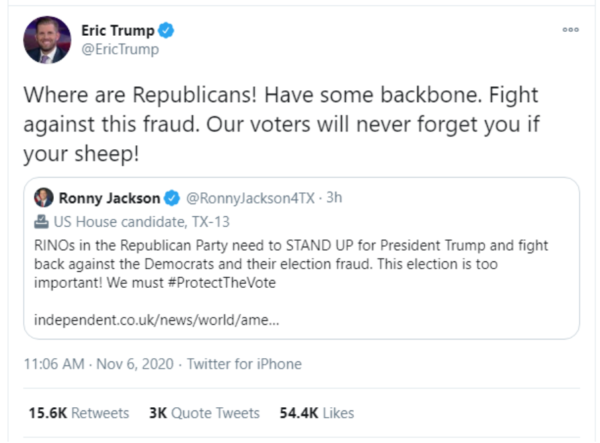 As you can see, we are already beginning to see this – with the President’s son expressing vocal frustration that the party is not seemingly doing its absolute utmost to stop counts, secure court challenges, start instructing Electoral College delegates, or whatever else it is he thinks they should be posturing towards.

And it is interesting to note that he’s declared that the “voters” in question who’ll “never forget” this – are “ours” [as in the Trump dynasty’s, the Trump wing of the Republican Party’s] … which is probably not entirely incorrect.

This is also the reason why this is noteworthy rather than merely yet another flare-point of anger amidst the constellation of consternation emanating from the White House in recent days.

Because the Trump ethos really has won a place within the GOP over the past four years. And while some for-now supporters like Lindsey Graham may turn out to be able to ‘revert’ to their pre-Trump selves with approximately the same level of velocity and spinelessness with which they became pro-Trump allies earlier in this term – I suspect that for a surprising swathe of the Republican Party , we’ll see the opposite.

A recognition that Trumpism actually DID ‘deliver the goods’ electorally – and that it should therefore be persisted with. Even enhanced and doubled-down upon, in more comprehensive, perhaps even overtly ‘competent’ fashion.

Except with various of these voices within the Republican Party noting that they have now potentially acquired Trumpism without Trump. Simultaneously that ethos’ greatest strength and most notorious liability rolled into one.

For those sorts, this Election has delivered them almost everything on their wishlist. They’ve got a strong position in both the Senate and House of Representatives, they’ve already got three Supreme Court appointments to deliver a moral majority for their side upon that organ; and, as I have noted earlier, a lack of a Trump to periodically ‘mess it all up’ (from their perspective) for them via late-night social media shenaniganry etc. So they will indeed quite likely be less than entirely enthusiastic about helping to support the President to intervene his way into inauguration for a second term.

For others, of the more ‘true believer’ variety – there can be no Trumpism without Trump. And, in their again not entirely inaccurate belief, the Republican holding of the line in this Election would have been difficult if not outright implausible sans Trump’s heavy hand upon the scale as well as the heart of the nation. They may perceive that either their principles or their political appeal may go out the window in his large-looming absence from their party or the presumptive national stage.

So where is all of this going?

Probably not in the conventional sense, for America itself.

But within the Republican Party. The battle over its soul which had been effectively forestalled via the triumphs and the whipping of the past four and a half years not only coming to a sudden flashpoint – but acquiring entirely new fissure-lines within it into the bargain.

The “Stab In The Back” narrative is going to take hold and drive a wave of insurgent anger both from an array of ordinary Republican voters and activists and even candidates or office-holders against the leadership. It may fizzle out within the span of a single congressional term – or it may produce a longer-lasting vituperative schism. It may even fuel, Tea Party style, a push for primary challenging and oustering of perceived ‘Betrayers’ that changes the shape of some Republican races and districts for years to come.

Or, I suppose, we may just see the whole thing go back to a soft simmer if something DOES change in the ongoing electoral count and recount results.

An additional possibility in the unlikely event of the latter – would be Trump and Sons back in the position of power and proceeding to weed out Republicans who had been perceived as disloyal.

Which could even lead to one of those ‘realignments’ of portions of American politics as some ‘moderate’ Republicans end up attempting to soft ‘patch over’ to a center spectrum aligned more with the Democratic Party.

But to return to the more likely set of scenarios – wherein Trump either continues to lose outright in the count of votes , or loses later in some legal challenge of his own devising – the anger against those perceived to have ‘failed’ him in each of the legislative and judicial branches (as well as in other supposed regime forces, such as Fox News – and seriously, the tweets this week about how Fox News was attempting to rig the election for Biden were … wild) : this anger may lead to an increased appetite for absolutism on the part of his supporters.

A feeling that if the Republicans of Senate and House aren’t going to ‘do their bit’ and fight tooth and claw for the Solar Presidency [‘L’Etat, C’est Moi’] of Trump ; and if the Republicans’ Supreme Court appointments refuse to show ‘gratitude’ to the man who put them there … that both institutions are pointless and should be further undermined and constrained in the future.

Which does not, of course, mean that those demands could come to especially active fruition. Although it does speak to another of these ‘fault-lines’ that is in the process of being opened up within both the Republican Party and the broader right wing of the American electorate.

That between the people who – rightly or wrongly and sincerely or not – hold some degree of (at least public) reverence for what they perceive to be the principles (rather than the principality) of the American civic edifice; and those who are more keen only upon ‘what those institutions can do for you’, perfectly happy to burn parts of it completely to the ground if it is not ‘doing for you’ at that particular prominent moment of time.

In ordinary times, the latter would be something of a fringe position in terms of public presentation if not necessarily in practice.

Yet these are, as hardly needs to be said, not ‘ordinary times’.

It is therefore not inconceivable that right-wing demands to hamstring the ‘traitor’ branches of government and their duly empowered/empaneled representatives thereupon – become a push to “reform” the system in a not entirely dissimilar manner to how the enthusiasm for Popular Vote and proportionality rather than the Electoral College has become a Cause Celebre in various more progressive enclaves over there.

Either way , it would appear that the upcoming spinoff show for 2020 – Republican Party 2021 – is going to have quite the chaotic new season.