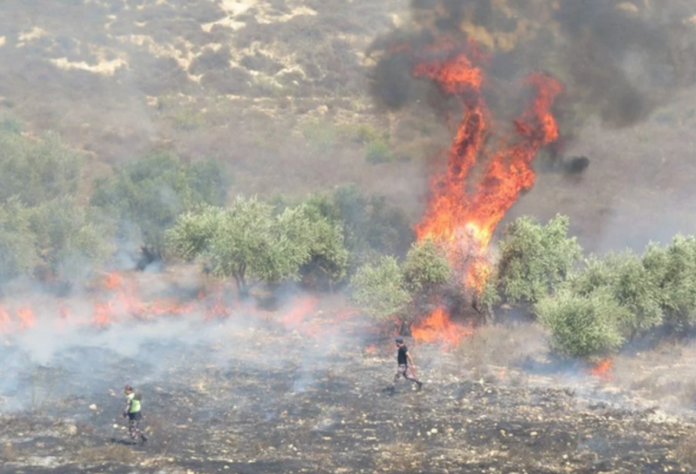 Since the Palestinian missile-launching from Gaza, reported on 15 September, Israeli forces have been hard at it trying to provoke more such acts of armed Resistance from the beleaguered territory but with almost utter failure. The people in Gaza are suffering unprecedented poverty, as UNWRA head Philip Lazzarini warned on 12 October. Now forced to sift through piles of rubbish in search of food, the population is beginning to sink into an externally-imposed sense of despair. Israel has been subjecting Gaza to a brutal blockade since 2007.

From 16-29 September, inclusive, Israel had launched 56 attacks on Gaza. Targets included, for the most part, fishing boats and agriculture. Israeli forces also made five waste-laying incursions into Gaza over the period, barging in and out of the defenceless community as, and whenever, they pleased.

October dawned — and still there were no more missile-firings from Gaza, until Israel had launched another nine more attacks, up to and including 4 October. The next day, starting at 9am, Israeli forces launched attacks on Palestinian farmland and then, at 22:00, the Gaza Resistance fired a single missile towards the Green Line — just one. Well that was it, Israel was delighted and responded immediately with two air strikes on east Rafah, as well as opening fire on farmland at 22:15. From then on, Israel kept on pounding Gaza, inflicting 18 more ceasefire violations up to and including 10 October. On 11 October there was, for that day, welcome relief from these attacks but any hope that it might continue was shattered the very next day — and then again, the day after.

In the West Bank, the Israeli Army joined forces in support of Occupation settlers setting fire to crops on Palestinian farmland. So far this month, the Israeli Army and settlers, between them, have destroyed hundreds of Palestinian olive trees and also violently obstructed olive harvesting. Not content with that, the settlers have also been plundering the Palestinian olive harvest for themselves. This month, up to and including 13 October, there have been 61 home invasion raids in West Bank towns, villages and UN refugee camps, 44 of them at night.

Although the verdict in the Julian Assange extradition case has been deferred until the beginning of next year, the evidence presented in his Defence has quite clearly demonstrated that there is no case for him to answer. The trial itself was a travesty, with the Court choosing to isolate Assange, locking him in a glass box through which he was unable to communicate with his legal team. The whole aim of the trial, and of Assange’s brutal health-compromising imprisonment, has been to make him appear to be a threat. The Prosecution depends upon creating the impression that WikiLeaks places lives in danger.

An award-winning German investigative journalist, John Goetz, testified at Assange’s extradition hearing with evidence that, contrary to US Government claims, WikiLeaks had, in fact, redacted names from US classified documents, where the lives of informants would have been at risk. The New Zealand investigative journalist, Nicky Hager, also gave evidence for the Defence, standing up well to prosecutor James Lewis QC and refuting his accusations that Julian Assange had published the entire un-redacted contents of diplomatic cables without care or consideration.

Far from placing lives in danger, WikiLeaks does the very opposite exposing, as it does, where the real danger to lives and freedom of speech originates. The vital role that WikiLeaks has played in defending human rights and respect for the principle of a fully-informed public, can readily be seen in the case of German citizen, Khalid El-Masri, who gained his freedom, thanks to the publishing by WikiLeaks of US Government cables revealing US interference in a judicial inquiry into his kidnapping by the CIA. El-Masri described how he had been seized at the Macedonian border and held incommunicado, while being brutally abused for over three weeks. Masked thugs dressed in black, handcuffed and blindfolded him at Skopje Airport and handed him over to a CIA inquisition team. The Grand Chamber of the European Court of Human Rights confirmed that El-Masri had been, among other things, severely beaten and sodomised with an object (See Treatment at Skopje Airport: 205). The Court found his treatment to be in violation of Article 3 of the European Convention on Human Rights.

On day nine of the hearing, El-Masri came to give evidence for the Defence but Judge Vanessa Baraitser ruled against him giving testimony and the Prosecutor for the US, James Lewis QC, told the Court that the US did not want the findings of the Strasbourg Court to be presented, the excuse being that the US had not had input in the case. Daniel Ellsberg — the former United States military analyst, famous for releasing the Pentagon Papers, a top-secret Pentagon study of US Government policy during the Vietnam War, also gave evidence in defence of Assange, informing the Court, in an eight-page written statement, how the WikiLeaks revelations had informed the world of the truth behind US action in Iraq and Afghanistan, just as they had done previously regarding the Vietnam War. Highly revealing interviews with Ellsberg, and others, in this regard can be seen in the video A sense of justice.

In February 2018, Westminster Chief Magistrate, Lady Emma Arbuthnot, rejected arguments against an arrest warrant issued in respect of Assange, which the UN Working Group on Arbitrary Detention had called “unreasonable” and “disproportionate”. She even declared that there was “no evidence” to support Mr Assange’s legitimate fears that he could be sought by US prosecutors. At this point, it is necessary to introduce the neo-Conservative group, the Henry Jackson Society (HJS). Lady Arbuthnot‘s husband, Lord James Arbuthnot, as Global Research informs us, “with links to the British military and intelligence establishment, was working closely with the neo-conservative Henry Jackson Society (HJS), a pressure group with a strongly anti-Assange agenda. Lord Arbuthnot has hosted and Chaired events for the HJS at the House of Lords and, for a long while, sat on its “political council”. The HJS hostility to Assange is extreme, having referred to him as “bonkers and paranoid”.

Another close associate, and financial beneficiary of HJS, is Priti Patel, the current UK Home Secretary, who will sign off Assange’s US extradition if ordered by the Court. She sat on the HJS Political Council from 2013 to 2016. “Staunchly pro-Israel”, as the Times of Israel described her, Patel flew to Washington, in July 2013, as a delegate at a forum organised by the Israel lobby group AIPAC, followed by an HJS event in the US Congress. In 2010, she was appointed as a parliamentary officer of the Conservative Friends of Israel (CFI), which BBC Channel 4 has described as “beyond doubt the most well-connected and probably the best funded of all Westminster lobbying groups.”

In 2017, as International Development Secretary, Priti Patel visited an Israeli military field hospital in the illegally-Occupied Golan Heights and turned to her Department for advice on the possibility of giving aid to Israeli military field hospitals in the Occupied territory. In October 2019, she visited Washington DC to meet William Barr, the US Attorney General in charge of the Assange case, as head of the Department of Justice. Together they signed the Cloud Act, an agreement that makes it easier for American and British law-enforcement agencies to demand the handover of electronic data related to their investigations. In July, Assange’s Defence team raised concern in Court that Barr may be using Assange’s extradition case in the UK for political ends. The British Foreign Policy observer and news analyst, Declassified UK, has previously revealed that in 2019, the former Home Secretary, Sajid Javid, who certified the initial US extradition request for Assange, attended six secret meetings organised by the American Enterprise Institute (AEI). AEI, which has been running a campaign against WikiLeaks and Assange since 2010, also has close ties with the US intelligence community.

Following 22 days of testimony, the closing arguments for the Prosecution and Defence will be presented in November and, on 4 January, Judge Vanessa Baraitser will make her judgement. As John Pilger notes, “Julian Assange’s extradition would mean that journalists anywhere in the world are bound by US laws.” Just as the witnesses and evidence for the Defence have demonstrated, this trial is very much about the public right to be informed, versus the determination of powerful state and corporate interests to hide the truth of their criminal behaviour in their quest for absolute power.

The company we keep

To date, we have had no response from Green Party co-leader James Shaw concerning our appeals over his insulting comments regarding the Boycott, Divestment and Sanctions movement (BDS) although he has continued to send us appeals for donations. Likewise, apart from one Green Party voluntary worker who assured us they would try to get a response from someone in the Green Party, we still have heard nothing. Green Party supporters need to know just where the Greens stand on this issue. The recent government, with avid New Zealand First party involvement in Defence as well as Foreign Affairs, has steered a course solidly in league with our Five-Eyes partners. This alliance is driven by powers that have stood in support of Israel, defending the Zionist regime from criticism and providing cover for its crimes against humanity. The UK, for example, is right now deepening its military relationship with Israel.

In Wales, Israel’s Elbit Systems, in collaboration with British rescue services, has been showing off its Hermes 900 drone. What hasn’t been made public is that this drone was first deployed during Israel’s blitz on Gaza in the summer of 2014. The company’s representatives were closely involved in that offensive, as the Israeli Air Force has acknowledged. An earlier version of the Elbit drone – a Hermes 450 – ‘identified’ four Palestinian children playing on a beach on 16 July 2014, labelling them as ‘Hamas militants’, which led to them being targeted and killed by a missile fired by the Israeli military. The following year, the British Government sanctioned the export of £387million-worth of weapons exports to Israel. The Five Eyes allies have adopted a devious and dishonest pretence of ‘evenhandedness’ towards the Israeli Occupation and its long-suffering victims. The UK, although describing US President Trump’s recognition of Jerusalem as Israel’s capital “unhelpful”, Britain soon began to make use of the US Embassy there. The UK even has a few troops stationed in Israel and the West Bank! Last year, the Royal Air Force hosted a training exercise in the UK in which RAF Typhoon jets flew with Israeli F-15 warplanes.

There can be no doubt that the UK Government is solidly with Israel but the nation’s news media stay quiet regarding the increasing level of involvement that, in recent years, has also included joint naval exercises and the sharing of signals intelligence.

BDS is one non-violent way of defending Palestinian human rights. Moreover, support for it also demonstrates recognition of the need to restore respect for rules-based international understanding, peace and security. For too long, the principles won for us all by the Fourth Geneva Convention have been callously dismissed and violated. The turn towards a safer, more honest and open world depends on every single one of us. Deep state commitment by Defence and Foreign Affairs to aggressive alliances must be ended. In New Zealand, a door is about to open that could lead to a meaningful change of policy – but that will require all the influence in Parliament we can muster.