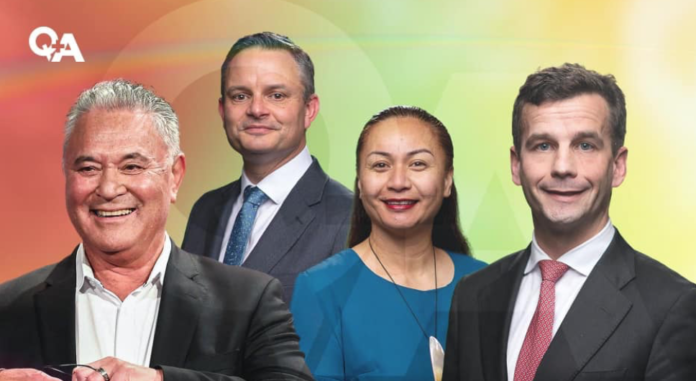 Another week, another excellent Q+A.

Jack Tame is the answer to the fourth estate obligation on the State Broadcaster, and he’s so good at it. Q+A has been must see political viewing all year, the coverage of the election probably the most genuinely insightful.

It’s the Minor Party Election Special and to my deep, deep sadness and regret, Winston refuses to appear and that is genuinely upsetting. After their last extraordinary interview, it would have been nice for the two to have clashed one last time as a farewell tour special, and he could have had a lovely bonding moment before NZ First are cut from Parliament.

It was not to be.

Marama and James are on justifying their incompetence over the last 3 years and the fact they are just holding on by their fingernails, (which they wouldn’t be hanging on by if they had, you know, been effective).  The Left will begrudgingly vote for them and keep them above the 5% threshold because their policy platform is far more transformative than Labours.

Jacinda has reached peak Mother of Dragons popularity with the mildest most tame policy Dragons ever seen.

We need the Greens so, 6% at least on the day. But I swear to Christ, if they fuck up the negotiations with Labour that’s it for me.

The proof in that pudding will be the first 100 day plan.

David Seymour is on doing his dull respectable schtick again.

David is the the smart arse under grad with intolerable right wing opinions, that’s who he is, a rebel no one likes following a flawed free market philosophy that isn’t relevant any longer. He’s not this dry balls City Council requisition officer who turns up to official interviews now.

His geek chic, his uncanny resemblance to Rimmer from Red Dwarf, his awkward dancing were part of what passes as Charm in Epsom and it worked because it was authentic. This stick up his arse statement thing is a like a suit that is 5 sizes too big for him.

We are laughing at him now, not with him.

ACT have crazy policy like lowering the minimum wage, the more toxic they are, the less likely the electorate will turn to National+ACT in 2023.

Tamihere is having the election campaign of his life. Whatever sins he’s committed, the incredible Māori Party policy platform is worth voting any chance you get. If the Māori Party win 2 seats, the’ll cause a overhang which might require Labour to negotiate with the Greens, and the Greens could be convinced to advocate for the Māori Party to be part of those negotiations, especially when you consider the policy alignment between Green and Maori Party.

The panel was awkward. Ben Thomas is in mourning for the National Party and his low energy vibe is what we in the broadcasting industry call a ‘ratings killer’.

Ben ‘Ratings Killer’ Thomas gloomed the studio down from a bright platform for the examination of the issues of the nation to a dark sad chamber of grief.

Damien Grant is a far happier right wing commentator and unlike Liam Hehir, owns a shirt that isn’t a polo neck.