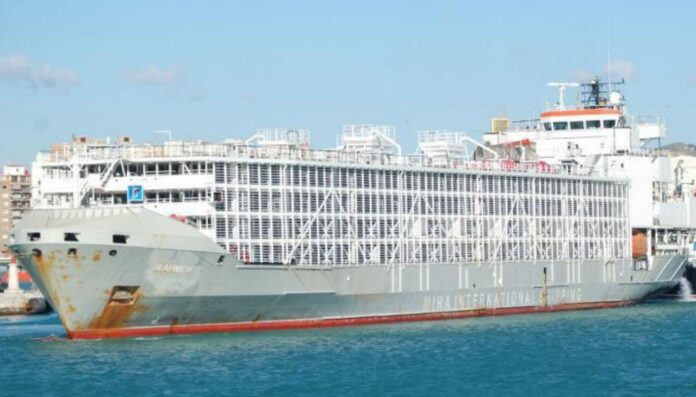 Wednesday 30 September, marks the fourth week since the sinking of the Gulf Livestock 1, which went down in a typhoon with the loss of 5,867 cows and 41 of the 43 human crew, mostly from the Philippines.

Animal rights groups joined together with Save Animals From Exploitation (SAFE) two weeks ago on Wednesday 16 September 2020 to conduct a nationwide series of actions to remember those who lost their lives in this tragic event, to gain public support of and petition to the government that they institute a permanent ban on live exports.

Wellington groups Speak Up For Animals (SUFA) and the Wellington chapter of the worldwide Animal Save Movement (Wellington Animal Save) teamed up with the SAFE in a vigil protest outside the Ministry for Primary Industries offices in our capital.

According to Sonja Penafiel Burmudez from Speak Up For Animals, most kiwis are against live export. “Many farmers refuse to send their animals due to their understanding of the distress and neglect the animals endure whilst standing in excrement and unable to access fresh water and food.”

In Auckland, activists from Direct Action Everywhere (DxE) and Auckland Animal Save marched from the bottom of Queen Street to Aotea Square.

“If the government had listened to activists, who pleaded with them not to allow these live exports to go ahead, all these lives, human and non-human would have been saved,” said Anna Rippon from DxE.

“We handed out flyers which directed people to take action by signing SAFE’s petition and writing to our Prime Minister Jacinda Ardern and our Minister for Primary Industries Damien O’Connor.”

Tauranga organiser Joy Ann Satchell for the Animal Save Movement said, “We started our protest outside the Port of Tauranga admin office, because of strong wind and little foot traffic we marched to a busy intersection.

“We were very encouraged by the amount of positive toots and comments of passers-by, nobody approves of live export except a greedy few. Politicians take note – BAN LIVE EXPORT.”

“The Gulf Livestock 1 cows had spent nearly three weeks in strictly confined conditions, being seasick, losing their balance, falling and possibly hurting themselves in ocean swells, not being able to satisfy their hunger and thirst when they wanted to. The constant hum and vibration of the ship’s motor and the temperature fluctuations are other factors that would have stressed them, adding to their fear and misery.

“Photos taken last year from that same ship showed cows standing or lying in inches-deep excrement that also caked their bodies and matted their fur.”

SAFE held an online virtual protest via Zoom. This attracted more than 600 participants, who were encouraged to take action on Twitter and Facebook.

Jacinda Ardern was doing a regular live video on Facebook at the time. This was interrupted by supporters of the SAFE campaign commenting on the live video Jacinda her to extend her kindness to animals by banning all live exports permanently.

Live exports for slaughter were prohibited for sheep in 2003 after a large number of rejected shipments resulted in sheep staying on the sea for many extra months before being slaughtered many times without stunning and sometimes in makeshift slaughterhouses.

“The agriculture minister who extended the trade ban to include cattle four years later, the late Jim Anderton, told the ABC in 2011 he was not prepared to risk New Zealand’s economy for such a small industry by playing ‘hard and fast’ with animal welfare.”

Animals exported for breeding are exempt from this ban, even though they only get a brief stay of execution. Once their usefulness as breeders has run its course, they are slaughtered in countries that do not share the same welfare standards as New Zealand.

On the 13 September SAFE put out the following statement: “Our Prime Minister and Agriculture Minister Damien O’Connor have heard from more than 18,000 caring people, asking that they permanently ban live export!

“With enough caring voices, they will have no choice but to listen. Add yours, here https://bit.ly/ban-live-exports”

Marianne Macdonald from the Animal Rights Group, SAFE, said MPI had been looking into the live export trade since it began a separate review in June last year.

“This seems to be MPI’s response to everything,” said Macdonald. “We’re still waiting for the review that was announced last year.”

She said the review wouldn’t make a difference for the animals going to countries with lower animal welfare standards and it was clear the practice needed to be banned.”

SAFE also partnered with the SPCA and published an open letter to Jacinda Ardern in the Herald and other publications. The letter starts “Dear Jacinda Ardern – Let’s show the world how kind we are.”

Former MAF chief veterinary officer John Hellstrom was quoted in a newsroom article published today, “The reality is they are mainly going to large feedlot operations, where there is high mortality and poor fertility. The way they treat bobby calves shouldn’t be mentioned in public, and they don’t have any significant welfare protocols for transport or slaughter.”3

Taranaki farmer Brett Sanger and first-time exporter of live animals regrets selling his surplus cows be exported. Sanger said; “I do have feelings for my stock and all animals. I wouldn’t be farming otherwise. Absolutely terrible, of all the things to go down, a livestock ship.”