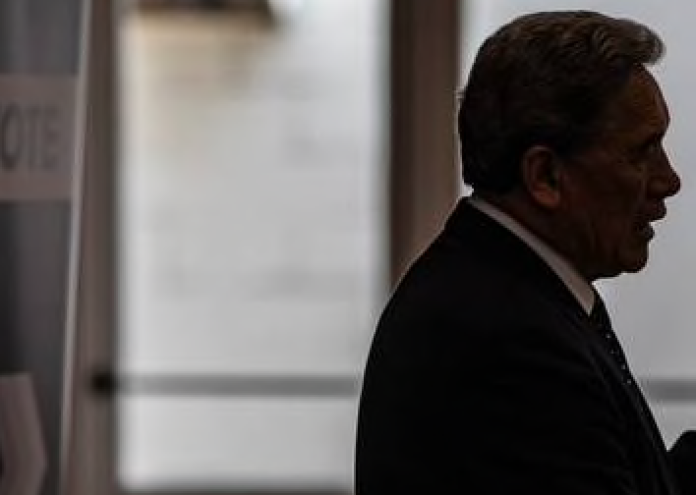 The way a snare works  is quite simple. The more the creature in it struggles .. the tighter the noose becomes. Had it gone another way, taken another approach, and resisted its instinct to thrash madly against the rope – it could much more easily slip out. But in its desperation – it does not do that, and consigns itself to its fate.

Now, New Zealand First is no wild animal (for the most part) – and we are not yet at the point wherein the Party can safely be cut open for a postmortem. It is an old war-horse – and woe betide the man who sneaks up behind a horse unprepared for a good kicking. That vigour may yet manage to propel the charger across the five percent finish line rather than to the ‘finished’ line a few weeks hence.

But last night’s Reid Research poll – coming as it does upon the heel of last week’s Colmar Brunton and seeming to confirm the party’s down in the margin-of-error thickets of circa two percent – should be worrying for them. Despite all the customary bluster about polling for NZF never being accurate (and I can still hear Winston’s words echo in my ears about the 2002 results being out by “more than a thousand percent”) – there was only an 0.1% difference between the Reid Research poll prediction for NZF immediately prior to the 2017 Election, and their actual result on the night.

So what has happened? How has it come to this?

Well, the simple answer is also simply wrong. Many people shall look at tonight’s Reid Research (as well as the various other previous polling of this cycle) and conclude that the rising New Conservatives (on 2.1% in the Reid Research, 1.6% in the Colmar Brunton) and Advance NZ have cannibalized NZF’s vote.

It would be tempting to presume that New Zealand First has been trading votes with the parties of the right-wing fringe. In some cases, this is not impossible – although even as applies ACT, I’d suspect that their sudden rise is the result of haemorrhaged National support rather than coming at Winston’s personal expense. (This shouldn’t be a point of serious doubt, as NZF and ACT are theoretically diametrically opposed on so many core issues … but who knows what goes through the minds of some ACT supporters some of the time)

Yet what has actually been occurring is that NZ First has been losing votes to Labour. As, to be sure, has just about everybody else.

And therein lies the rub.

NZ First’s strategy for much of the campaign this year has been to present itself as ‘in this government but not of this government’. At Cabinet at least partially to prevent Labour (and the Greens) from Governing in particular areas. The proverbial ‘hand-brake’ upon our democracy.

And some of the time, this is a viable stratagem. It is possible that, were circumstances different than they are now, that this would even have been a successful prospect for the party.

If this were genuinely a 2002 style situation, for example, a weak National would mean that voters distressed about the terrifying specter of a moderate allegedly-left-wing government would be queueing up in droves to support parties perceived as able to ‘counter’ or at least ‘limit’ Labour’s agenda. Whatever that “agenda” may be perceived to be. It almost does not matter.

But this is not a 2002 style situation. It’s a 2020 style situation. A Time of Endings. And twists in the narrative that keep occurring so we’re never quite sure when or where that “Ending” may happen to be.

As soon as NZ First chose to go with Labour in 2017, it made it exponentially harder for itself to present as being “the outsider” – it was now going to be part of Government. Which makes running *against* the Government quite a difficult proposition to successfully pull off.

Running *with* the Government as a necessary support partner, however, is quite a different – and, I suspect quite a lot more of a viable – prospect. It’s something the Greens are, arguably, doing right at this minute – and reaping the polling rewards of being about three times as popular as NZ First, and over the 5% threshold. In theory – we’ll see how things play out on Election Night.

As I have written about before, from 2014 onwards there was a concerted effort inside NZF to move the whole thing ‘rightwards’. I don’t say that this was the dominant perception of members – nor even of everybody with an actual decision-making power inside the tent at that time. But some pushed for it, arranged things, and that’s in part how NZF wound up moving away from its 2011 positioning to be more ‘center’ between Labour and National than it had previously been. And thence, where its self-contradictory series of “Bottom Lines” showboating from the 2017 campaign presumably got its start. Attempts to draw in voters from National – a strategy that was doubled down upon once it became more difficult for multiple reasons to get more votes from Labour.

But in 2020 – there are precious few votes to be garnered from National. They’ve already all either left (whether for Labour or for ACT), or are battening down the hatches and clinging on for dear life.

So aiming to win (soft) National support by presenting yourself as the vector for Government restraining – is , at the moment at least , somewhere between a losing wicket and a slow hole to nowhere.

If you like Labour, why would you want to vote for the party that is the self-declared “handbrake” upon Labour governance. If you don’t like Labour … you’re probably desperately clinging on for dear life pretending that National’s actually somewhere in the mid thirties despite an escalating mound of “ROGUE POLLS” and Goldsmith accounting to the contrary. Or you’re a Greens voter.

The sensible way forward as of several months ago – it’s probably too late for this now – would have been to present as the ‘elder statesman’ party. The one that had productively worked with others to produce a strong and stable response to challenging times. And who had worked overtime in the relevant portfolio sectors (like Foreign Affairs) to help augment rather than undermine the Government’s core directives.

Because in large measure … all of that’s actually rather true, and it is a shame that it has been de-emphasized: both by deliberate signalling on the campaign trail, and by some of NZF’s high-profile actions while in or around Government (that handbrake thing being quite prominent within them).

There would have been meaningful ‘room for difference’ as well to prevent the specter of being ‘absorbed’ and ‘eclipsed’ by Labour – a risk, to be sure, for attempting to run ‘with’ rather than ‘against’ the dominant party of government.

But looking at the Greens at the moment – who are presently in a rather better position than NZF – we can see that it is possible to support Labour *and* present a vision that goes further than Labour’s in important ways which get noticed by voters. Not necessarily *positively* noticed by voters, perhaps, but that’s the risk you take.

It’s not impossible that things will change quite rapidly over the next month, and NZF will somehow perform yet another amazing resurrection from what would otherwise be the dying embers of their funeral pyre. I’d certainly like to believe that to be the case – but the *good* NZ First, not the rather obstructivist-obnoxious petty-point-scoring-for-petty-point-scoring’s-sake would-rather-be-working-with-the-other-guys-anyway side we’ve occasionally seen from time to time over the past three years, particularly wearing a quite literally Donald Trump style hat. Like … literally wearing a Donald Trump style hat.

Because ultimately – it’s been that sort of vibe which has been the problem. I’m not talking about giving a voice to the voiceless – in a democracy, that should *never* be a problem. Although the Public Party is certainly pushing the limits of *that* particular envelope, to be sure. Rather, it’s the attempt to forcibly push a centre-right outrage agenda, by generating one – and fatuous windbaggery breathing hard and heavy so it’s so difficult to see all the actual, real positive contribution being made.

It’s evident that the ‘conventional logic’ inside parts of the party is that this strategy should be working – and should be providing just enough difference from Labour to bring in both ‘conservative’ Labour supporters and National supporters alike. But it isn’t.

And so, the noose is tightening. As it has been, really, all year. NZ First’s polling has been progressively tracking downwards for much of this cycle – as, more worryingly, have Winston’s Prefered Prime Ministership ratings (which interestingly tend to be a better predictor of the party’s support than polling, some of the time).

So it’s running on instinct. Its instinct – at least in some quarters – being to thrash about and ever more dramatically. Just last week we had talk of “bringing down the Government” rather than making use of the “agree to disagree” provisions in the Coalition Agreement. And a range of other previous outbursts that sound more like rival parties on opposite sides of the aisle instead of coalition partners joined at the hip on the Treasury Benches.

And just as we saw with the mechanism of the snare – in situations wherein the animal thrashes about acting out its instincts , the noose does not leave its limb. Instead, it begins to cut off the blood-flow as it constricts in fairly direct consequence.

It’s probably too late to do anything about that now.

The only serious question is whether NZ First possesses sufficient strength left in its hindquarters to rip out the snare from its moorings rather than successfully breaking free.

Maybe, just maybe, its leg (last or otherwise) can still support it yet.