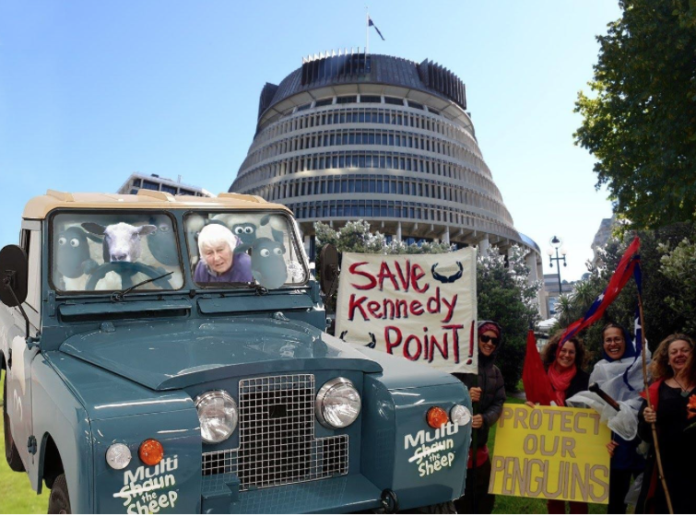 “Waiheke is full of activists and lunatics”.  Reading Doug McKay’s comments provided a hilarious start to Sunday morning.  The throwaway comments are also disturbing, reflecting the contempt and continued battle Waiheke and rural communities face in having our basic needs met by government entities.  Not to mention the socially damaging view that people who stand up for community values and environment are completely bonkers.

Well this lunatic community has higher input into local board feedback than every other in the Auckland area, aside from Aotea/Great Barrier.   People can identify local board members by name and our local newspaper, radio station and facebook pages keep us informed of issues that affect us.

As a population of 9,000 in a city of 1.8 million we’ve always had to pull above our weight, often maligned for seeking workable solutions to simple problems.     We also wonder why no brainers, like additional water tanks for water storage, haven’t reached Auckland sooner, particularly given the water shortages the city is now experiencing.

Nuclear free, GE Free and TPPA free. We have a heightened sense of awareness of global issues and threats.   As an island community within an island nation, we’re like the canary down the mine, noticing the effects of rising housing prices often before they are felt by other communities, where it’s possible to move just that little bit further away to get something cheaper.  by moving just a little bit further away.

Council staff have been genuinely surprised that the Waiheke Local Board had its own housing strategy to address housing access and affordability.  And yet, according to the 2013 census figures, significant numbers of renters spend more than 60% of their income to live in rotting baches, and live on a median annual income that is $2,400 less than Auckland. This housing unaffordability, while 30% of houses remain empty, splits families and friends, and sees people who have grown up and lived on Waiheke all their lives, forced away.  In fact, when Mr McKay’s comments came through on the intercom, the committee were waiting for the submission of the Waiheke Health Trust’s plea that Council land be held for community purposes.

Our island population experiences comparable issues to the rest of the country but often with less support.  Addiction and poverty are an issue for many of us, particularly affecting young people who then struggle to engage with the opportunities of the city because work and study options are an unaffordable hour away.

And yet we continue to be self-reliant and consistently solve our own problems.  A Friday night Friends of the Street service gets our young people home safely and has reduced our drink driving statistics, while  a Kai Conscious programme  feeds people, teaches people to cook supermarket rescue food that would otherwise go to waste, and provides a meeting place for all sectors of our community.

Nor are our protests unreasonable.  The recent protest around bus routes highlighted a major shortcoming around the recent AT consultation.   According to the 2013 census, the 60 to 74 year olds are the fastest growing age bracket, with 58% of the population are aged over 40, compared to 43% in Auckland.    To their credit, AT changed some of the routes in response to the request for greater coverage over higher frequency.

Meanwhile the press and Auckland Council continue to favour the mythical and lopsided view that we are only an island of nimbies and wealth.  Genuine concerns are dismissed as coming from ‘colourful characters’ who are difficult, parochial or stopping progress.

We call it having fun with the things we stand up for.   Moreover, simply talking about the issues never seems to get any press coverage at all, nor does it dig us out of the quagmire of bureaucracy.  Since the forming of the Supercity in 2010, we have marched up Queen Street with a penguin look-a-like protect our waste contract, (since lost and recently returned),  and we’ve carried a coffin onto the ferry to protest unaffordable ferry fares.  Most recently a few of us drove a sheep down to Wellington to draw attention to the ridiculousness of plonking  a marina into a transport gateway that receives over 95% of our freight and is the only island access point for vehicles.  This issue is now in its 4th year, having cost the community $450,000 to date.

I feel honoured to be labelled a lunatic if it means standing up for what you believe in.   My time on the Local Board and since have shown me what it means to feel empowered and to fight for community interests, and to get the best out of government.  Skills I now hope to take into the National political arena by standing for Labour in Tāmaki.

Let’s position Waiheke as something more interesting and valuable than as a playground of the rich, to be taken advantage of and patronized.    It is a refuge, where successive generations of community and environmental advocates have fought to retain its rural character and maintain its feel as the jewel in Auckland’s crown, a place for all Aucklanders to enjoy, not just the superwealthy as is often promoted.

‘We are far enough behind to be ahead’, not because we’re too stupid to know otherwise, but because we understand the value of undevelopment and work hard to protect what we have.   Perhaps more importantly we pave the way for other communities to question things that are done at them rather than with them.

Shirin Brown was elected to the Waiheke Local Board from 2013 to 2019.  She is currently researching for a PhD in local government and standing for Labour in Tāmaki.