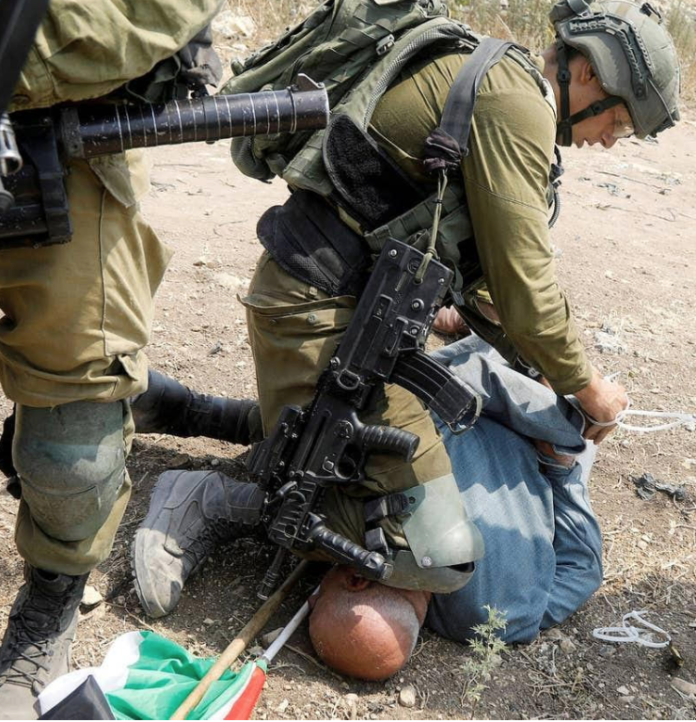 On 1 September, Israeli soldiers assaulted and silenced a 68-year-old farmer, Khairi Hanoun, for peacefully, even if noisily, protesting against the theft of his land by the Israeli Occupation. This knee-on-neck operation was caught on video and, while the BBC reported the Israeli Army claim that Hanoun had initiated the violence, saying the footage was “only partial, slanted, and does not reflect the rioting and violence toward the army forces that preceded the arrest”, other videos show that not to be the case. Hanoun is seen being pursued by Israeli soldiers, with one catching up with him and wrestling him to the ground. Israeli forces have already seized nearly 80 hectares of land belonging to the villages of Shufa and Ijbara in order to develop an industrial zone, in violation of international law. Israel is building roads to connect the zone with settlements, as well as preventing farmers from gaining access to their land. The villagers protest, in the hope that some notice might be taken to bring pressure upon Israel to cease its land-grabbing violations. While such legitimate protest is only natural, Israel and its news-media allies seek to dismiss it as ‘violent rioting’.

Israel has moved a chemical plant, closed down by court orderbecause of its toxic emissions, from Netanya in Israel to across the Green Line, into Occupied Palestine. The privately-owned Geshuri Company‘s plant manufactures pesticides and fertiliers, and it was subject to the Israeli Court order, due to complaints from residents. In militarily-Occupied Palestine, where Palestinian lives matter little to Israel, the company can continue its poisonous activity, free from Israel’s strict domestic environmental laws. The land, specifically seized for the purpose, accommodates not one, but twelve Israeli chemical factories in an industrial zone, between Tulkarem and Israel, called Nitzanei Shalom. Emissions and chemical waste are ruining Palestinian agricultural land and polluting both the air and ground water. Locally, there is an increase in respiratory diseases, eye infections and cancer. The Geshuri factory operations are so toxic that, when the wind blows in the direction of Israel, the plant ceases operations. Dr Abed Darak of the Tulkarem Ministry of Health, has warned that the city has the highest cancer and leukaemia rate in the West Bank.

A 10 September report from the United Nations Office for the Co-ordination of Humanitarian Affairs (OCHA) states that: “The period from March to August 2020 saw the demolition or confiscation of 389 Palestinian-owned structures in the West Bank, on average, 65 per month, the highest average destruction rate in four years.” OCHA’s Humanitarian Co-ordinator, Jamie McGoldrick said that: “Early during the COVID-19 pandemic, the Israeli authorities indicated that they would restrain their longstanding policy of demolishing inhabited Palestinian homes. Sadly, demolitions during the period March-August 2020 left 442 Palestinians homeless, further exposing many to risks associated with the pandemic. In August alone, 205 people were displaced, more than in any other single month since January 2017.”

Of course, it is not only homes in Palestine that are smashed. The barbaric Israeli Occupation destroys water supply, hygiene and sanitation facilities, as well as farm buildings and agriculture. Zionist contempt for world opinion has led it to destroy 50 structures provided by international donors as humanitarian aid.

The destruction of property on territory subjected to foreign, military occupation is prohibited under international humanitarian law. Today, such devastation inflicted during the COVID-19 pandemic is particularly menacing as it inevitably compounds the risks faced in the already highly vulnerable West Bank.

In 2010, the Israeli newspaper Haaretz reported an assertion that Julian Assange had secretly agreed with Israel not to publish documents damaging to Israeli interests. An online publication, Al Haqiqa, even claimed that Assange had removed or destroyed documents related to Israel’s 2006 and 2008–2009 attacks on Gaza. Nothing could be further from the truth. For almost nine years, 2007–2015, WikiLeaks exposed the powerful influence Israel had over the US, releasing diplomatic cables and emails, mostly between the US Embassy in Tel Aviv and Washington, that are now part of the Public Library of US Diplomacy.

Now Assange faces a cruel travesty of justice in a US-sponsored extradition case at the Central Criminal Court in London. The one-sided battle in the British court is part of a wider war on the very principles of freedom of speech and democracy, in which the UK has given up its sovereignty to serve the US. The UN has twice found that the WikiLeaks publisher had been arbitrarily detained and, in a public statement, the UN OHCHR called on the Swedish and British authorities to end Mr Assange’s deprivation of liberty, respect his physical integrity and freedom of movement, and afford him the right to compensation. US citizen, Alfred de Zayas, appointed as the first Independent Expert on the promotion of a democratic and equitable international order by the Human Rights Council, said in a press release “. . . international order depends on the consistent and uniform application of international law . . .” He emphasied the value of whistle-blowers, who he described as key human rights defenders against a growing culture of secrecy, closed-door deals, disinformation, lack of access to information and 1984-like surveillance of individuals.

Although Israel and its allies assert that the only path to peace is direct negotiations between Israel and the Palestinian Authority (PA), Israel’s contempt for the PA is made clear in a cable sent from the Embassy in Tel Aviv on 3 November 2008. The cable reveals both Israel’s intention to keep Gaza in poverty and its military plans to attack urban areas. WikiLeaks also revealed Israel’s fear of International Criminal Court (ICC) investigations and possible proceedings regarding its 2008–2009 Gaza invasion.

The US tries to exercise its power and influence globally in efforts to further Israel’s interests. In 2011, it sent agents of its Federal Bureau of Investigation (FBI) to Iceland to engage in a subversive exercise aimed at Assange and WikiLeaks. Years later, in 2016 a former Icelandic Minister of the Interior, Ögmundur Jónasson, revealed how his suspicions were aroused regarding the FBI’s motives and purpose. The FBI told Iceland that they had advanced knowledge of impending attacks by ‘hackers’ to destroy the country’s software systems. But Jónasson was not convinced and, as he put it, was “well aware that a helping hand might easily become a manipulating hand!” With no permission for them to interfere and with no reason at all to target WikiLeaks, Jónasson told the FBI that they should immediately cease all activities in Iceland. In fact, the FBI were ordered out of Iceland. Just so that there could be no doubt, he made it very clear that “if I had to take sides with either WikiLeaks or the FBI or CIA, I would have no difficulty in choosing: I would be on the side of WikiLeaks.” To say the least, this was a great example of declared non-alignment and independence that deserves respect and emulation by all who value freedom of information and rules-based international relations.

The online journal Independent Australia also published an article dealing with the FBI attempt to infiltrate Iceland’s security that contains the following statement by Ögmundur Jónasson: “What is Australia doing? Isn’t Julian Assange an Australian citizen? However, I don’t see Australian authorities taking on the responsibility to protect their citizen. Australia shows, as far as I can see, the same indifference and hence complicity with the US as is the case in most other lands. And may I add where is the world press, the same press which gratefully published the material WikiLeaks provided them with? Why are they quiet? In the end, we are all responsible. We are seeing an individual and an organisation taken to court, with 18 charges which could lead to 175 years in prison. All this for carrying out investigative journalism.”

The final stage of the US/UK-collaborated extradition court hearing began on 7 September. When John Pilger asked Julian what his motive was for starting WikiLeaks, he replied: “Transparency and accountability are moral issues that must be the essence of public life and journalism.” For this effort, as the UN expert, Nils Melzer, has observed, the selfless public-serving journalist has been subjected to the most horrendous neglect, isolation and psychological torture. Now Julian Assange is no longer news and, having profited from his journalism, the Guardian has fallen silent. The mainstream news media and western-allied political leaders collectively betray Julian Assange and, by so doing, also threaten the right to free speech and respect for humanitarian international law.

WikiLeaks published news, comprising information about the wars in Iraq and Afghanistan, US diplomatic cables and Guantánamo Bay that revealed evidence of war crimes. The US can never forgive WikiLeaks for publishing a military video showing a 2007 attack by Apache helicopters on a street in Baghdad that killed a dozen people, including two Reuters news staff. What is seldom mentioned is the wounding of two children in the attack, a girl who suffered a stomach wound and glass in her eyes and a boy who received head injuries.

In a debate on Threats to Media Freedom and Journalists’ Security in Europe, the Parliamentary Assembly of the Council of Europe (PACE), unanimously called on member states to “oppose the extradition of WikiLeaks founder Julian Assange to the United States”. The Assembly, noting that the detention and criminal prosecution of Julian Assange set a dangerous precedent for journalists, was also in accord with the recommendation of the UN Special Rapporteur on Torture and Other Cruel, Inhuman or Degrading Treatment or Punishment, who has declared that Assange’s extradition to the United States must be barred and that he must be promptly released. The leader of the Italian Parliamentary Intergroup for monitoring the Assange case, Senator Gianni Marilotti, told the meeting that, “We should be surprised and in a certain way outraged by the cautious silence kept by some states not only on Julian Assange’s situation but also on the facts revealed by him through WikiLeaks’ work.

In 2003, George W. Bush described the then-Australian Prime Minister, John Howard, as Washington’s sheriff, gladly promoting him from his own declaration of being merely deputy sheriff to the US. The only change since then is that the subservience is spreading. The silence of our five-eyes partners and news media concerning Israel‘s war crimes, and the injustice being meted out to Julian Assange, is helping to undermine the very rules-based international law we claim to support. Where does New Zealand stand? Silence is a grim indicator.