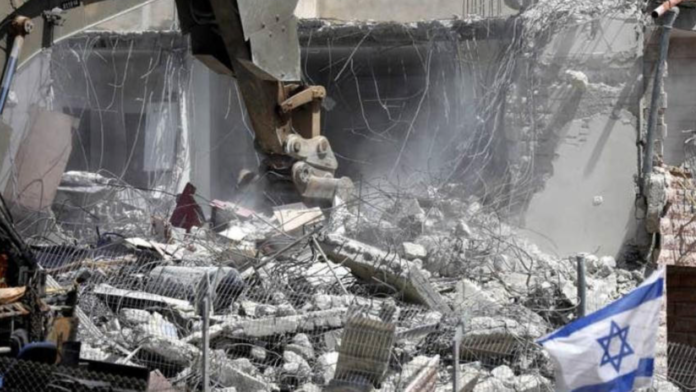 Palestinian-launched missiles fired across the Green Line plainly count as ceasefire violations, as do the less common armed Gaza Resistance attacks on Israeli military positions. However, this time Israel and its mainstream news-media allies have tended to concentrate disproportionately on the flying of incendiary balloons and kites by Palestinian protesters. From 18-26 August, there were six demonstrations using incendiary balloons and kites, not without risk to the protesters because Israeli Army positions opened fire towards every one of them.

While these devices may occasionally land in populated areas and set fire mainly to farmland, their effects cannot possibly be compared with those resulting from Israeli air strikes, gunboat attacks on Palestinian fishing boats and the shelling of Palestinian farmland. And, while Israel imposes its blockade on Gaza in the name of ‘security’, it makes frequent military incursions into the defenceless enclave, as well as constantly violating its air space. Palestinian incendiary balloons and kites have never caused death or injury. So what is their purpose?

The answer should be obvious – it is to draw attention to what Israel is doing to Gaza, and shout to the world “here we still are, stop ignoring us and instead help us defend our human rights!” Gaza has suffered under Israel’s crushing blockade since 2007 and the Zionist regime has been imposing movement restrictions on the population for even longer, since the early 1990s, in fact. This decades-long collective punishment is a violation of international law that can only be brought to an end with sanctions. Now, Israel has forced Gaza’s only power plant to shut down, even further restricting the electricity supply. In addition, around half the population faces imminent starvation and sickness. Israel attacks Palestinian fishing boats to further restrict the food supply and, to that end, has also seized control of more than a third of Gaza’s farmland. Agricultural land elsewhere in Gaza is vulnerable to destructive Israeli Army incursions, air strikes and gunfire.

A dedicated pro-Palestinian activist, Deborah Darnes, received a reply from the UK Foreign and Commonwealth Office (FCO) dated 1 September 2020 [www.gov.uk/fco Our reference: TO2020/15868] that stated: “The British Government firmly opposes calls to boycott Israel. The UK and Israel have a strong and important trading relationship and we are firmly opposed to boycotts or sanctions.”

Deborah responded, in part, to this and other FCO comments, as follows:

The British government is opposed to boycotts or sanctions against Israel due to our strong and important trading relationship. Therefore I conclude that trade is more important than human rights.

“The crisis in Ukraine is not comparable to the situation in the West Bank and Gaza strip. After illegally annexing Crimea in 2014, Russia continues to engage in a deliberate plan to destabilise Ukraine, supporting pro-Russian armed-formations in the east of the country. Sanctions are being used as an economic lever in order to influence Russia’s behaviour and to deter further destabilisation.”

Israel has occupied the West Bank and Gaza since 1967. Currently Israel is bombing Gaza and does so at regular intervals. This is not a war as the Palestinians do not have an army and any missiles from Gaza are part of a legitimate resistance which is legal under international law. Israel continues to steal land and demolish homes of Palestinians. Israeli occupation forces kill Palestinians regularly as do Israeli settlers who face minimal or no consequences.

“The UK continues to support a negotiated settlement leading to a safe and secure Israel living alongside a viable and sovereign Palestinian state; based on 1967 borders with agreed land swaps, with Jerusalem as the shared capital of both states, and a just, fair, agreed and realistic settlement for refugees”.

How is this possible without sanctions? Israel continues to build illegal settlements and steal land. I know and you know a two state is no longer possible. What actions are Britain taking to achieve this negotiated settlement? The US Peace deal and deals with the UAE will never achieve this as no one is talking to the Palestinians. Israel was created by stealing land and from 1917 and the 1940s onwards the Palestinians have never been given a real say in their future. This has been a colonial enterprise from the start and we have helped create a racist apartheid state.

Without sanctions there will never be peace. We need justice for Palestine. At least individuals can use boycotts and people are increasingly using this to apply pressure on Israel. If you have a policy on human rights violations then it needs to be applied to all who meet the criteria. Israel is clearly in breach of human rights and International Law in regard to the Palestinians and the reality is reflected in the numerous UN resolutions against Israel.

Yours very sincerely but disgusted

Death and destruction in West Bank

When asked a direct question concerning Israel‘s destruction of a Palestinian Covid-19 testing centre in Hebron, New Zealand’s Five Eyes partner, the UK, was unable to deny the crime, with the Foreign and Commonwealth Office (FCO) merely responding as follows: “We are concerned by the reports of a recent demolition of a COVID-19 testing centre in Hebron” and adding that the FCO had, in its words, “repeatedly made clear to the Israeli authorities our view that demolitions, in all but the most exceptional of circumstances, are contrary to International Humanitarian Law.”

The brutal military dictatorship that Israel imposes upon the Palestinian people intrudes into the very heart of what it is to be human – the home. The home is where children begin their lives, where security is paramount and where they learn to form relationships and understanding of humanity. For Palestinians, subjected to the selfish will of foreign Occupation, there is no such thing as security. The home may be invaded by heavily-armed Israeli troops at any time, without warning – day and night. Imagine the effect of this constant fear upon the consciousness of the children and their distraught parents.

Zionism leads Israel to arrogantly believe that it has the right to dictate to the Palestinian population when, where and how they may build their homes. Every Palestinian family living under this regime knows that whether or not their home may remain standing, or for how long, will be entirely up to the strategic requirements of the foreign Occupier. Homes will be destroyed whenever the Israeli Army, or settlers, decide they are no longer acceptable. In the past, Israel was quite happy to do the destruction but, more recently and with cynical cruelty, it demands that Palestinian families demolish their own homes – or else face the additional burden of having to pay an extortionate fee to the foreign Occupier to do it for them.

Israel’s preoccupation with furthering its racist agenda makes it oblivious of its obligations to conform with international humanitarian law. Palestinians have to go, cap-in-hand, to their Zionist master to beg permission to build homes, which is almost always denied. One of the most barbaric forms of Israeli terror tactics is home-invasion which, at its most extreme, includes the abduction of minors (of all ages) from their homes at dead of night. Israeli control of the Palestinian population extends to every aspect of living, including the economy, business and agriculture. Palestinian farmers, whose land is trapped behind Israel’s illegal annexation Wall, have to cope with excessively restrictive limitations of access to it. Palestinian businesses are often invaded and even plundered, while many end up totally destroyed. Israel cites ‘security’ as the main justification for its behaviour – but Palestinian security is never a consideration and that attitude is openly and officially expressed in statements by Israel’s allies.

New Zealand’s partners, such as the UK, claim to seek a “negotiated peace settlement that leads to a safe and secure Israel living alongside a viable and sovereign Palestinian state . . .” There is no mention of security for Palestine. Indeed, Israel and its allies have made it plain that any Palestinian ‘state’ which might be permitted to evolve would have no sovereignty over its air space or maritime areas. Likewise, it would not be allowed to form alliances with other countries and its economy would always be subject to limitations and control by Israel.

Where does our own Government really stand?

The US and the UK unreservedly support Israel, holding that only through negotiation can peace be achieved, while ignoring the reality that one party, Israel, clearly has its knee on the other’s neck. The New Zealand Government supports the principle of imposing UN Sanctions to apply pressure on countries that violate international law. It is reasonable to demand, therefore, that it immediately takes steps, to seek UN Sanctions against Israel, in order to conform, as our Ministry of Foreign Affairs and Trade puts it, with the principle of applying pressure to countries that “don’t co-operate with international law.” Does our country stand with justice – or does it prefer to serve the strategic goals of its great-power ‘allies’?