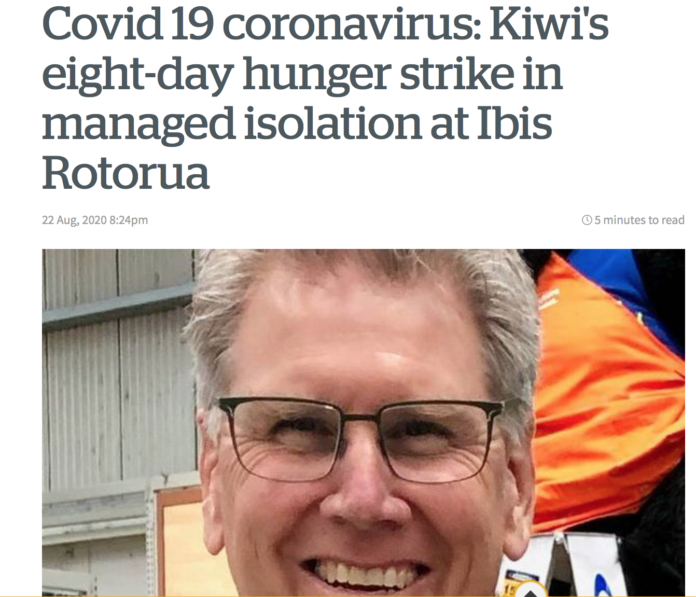 A business owner in managed isolation says he stopped eating for eight days to see if authorities would notice.

They didn’t, Tony Everitt said, after eating what he says was his first meal in almost 192 hours.

From when he ate a small breakfast in Hong Kong on August 14 until this morning, when he opened a managed isolation-supplied breakfast of toast, eggs, hash browns, tomato, sausages, fruit and a muffin, Everitt says he survived only on water and black coffee.

But a Managed Isolation and Quarantine spokesman said nursing staff spoke to Everitt daily and recorded no health concerns, and every effort had been made to make sure returnees’ health and wellbeing needs were met.

Everitt, who before arriving in New Zealand unsuccessfully requested an exemption from managed isolation to self-isolate alone at his home, began his silent protest by turning down an offer of water and a snack before boarding a bus in Auckland to travel to the Ibis Rotorua.

He then deliberately made no orders for the food supplied to those in isolation, or from outside suppliers.

“When I arrived I thought, ‘I bet no one is even interested in anything other than the Covid-19 virus, so I decided to run an experiment, let’s not eat for seven days and see if anyone notices … I was right, no one has noticed.

…let me see if I can get this completely fucking straight.

A whinging Boomer who is shitty that he didn’t get his own way decided to stage a silent hunger strike to catch the authorities out not caring?

Why is he being given any attention by the NZ Herald?

Who gives two shits if he decides to cut his nose off despite his face, as long as he isn’t carrying the plague into our country, no one cares!

This is as insanely inane as the story the Herald ran a day ago about a lesbian couple who had a noise complaint made against them in a  hotel and made a police complaint out of it.

I’ve read that story 3 times and I still don’t understand why the fuck it’s news.

I note that these two ‘news’ stories occur right after disgraced speechwriter Matthew Hooton has retuned to the NZ Herald.

If the NZ Herald is journalism, Donald Trump is a feminist.