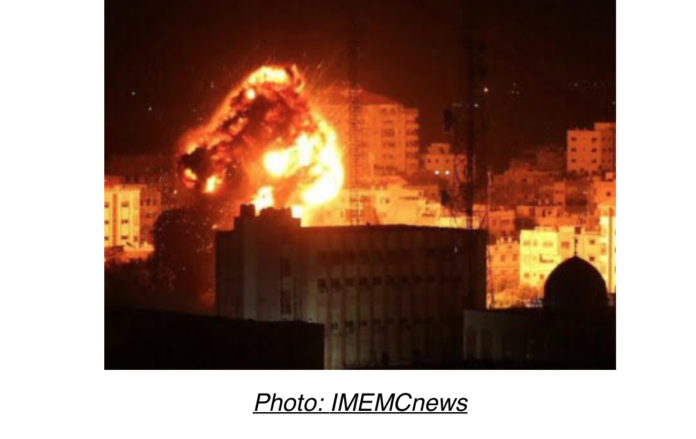 In the early hours of 7 August, Israeli Occupation forces, in a night raid and home invasions in Jenin, shot and killed Dalia Samudi in her Jabariyat neighbourhood home. She received several bullet wounds in the chest while trying to close a window against Israeli Army tear gas; the soldiers even opened fire on the ambulance that arrived to take her to hospital. Dalia was pronounced dead shortly after arrival at hospital and the 23-year-old woman’s new-born child is now motherless. The local Red Crescent Director, Mahmoud al-Sa’adi, confirmed to the Wafa News Agency that the ambulance, scarred with bullets, had been fired on by Israeli soldiers as it arrived to evacuate her.

On 13 August, following two Israeli air strikes and an artillery barrage on the al-Shati UN refugee camp, 20 homes were left damaged and an unexploded missile, found in a UN-run school there, caused its immediate evacuation. One mother, Um-Muhammed Talat, described how the 2am Israeli blitz had awakened her terrified children. At around the same time, Israeli air strikes also hit the east of Beit Hanoun and Rafah. Earlier, the Israeli Army made an incursion into Gaza, laying waste to land and, in the West Bank, two Palestinian workers were shot and wounded by Israeli forces. Israeli settlers, in the North Jordan Valley, seized control of Palestinian farmland in two areas and, in the district of Qalqiliya, other settlers set fire to olive trees while, during the night, settler militants also invaded the village of Asira al-Qibliya, setting fire to a bulldozer and spraying racist insults, in Hebrew, on village walls. When villagers acted to defend themselves and their property, the Israeli Army intervened, launching stun grenades and tear gas canisters, in support of the settlers. On 15 August, at least four small children were injured during a fifth straight night of Israeli air strikes and barrages on the Gaza Strip.

An inspirational Palestinian spirit exemplifies the will to survive

The Gaza Strip’s only power plant was forced to shut down completely on 18 August, less than a week after Israel totally cut fuel supplies to Gaza. Israel knows that Gaza is at its mercy for the supply of energy and this latest sadistic act comes on top of seven consecutive nights of air strikes. The prospect of rebuilding the devastation in Gaza might appear hopeless but a young Palestinian woman, a qualified engineer, has come up with a remarkable solution. Her invention doesn’t just lift spirits – it is so green the West could learn from her example.

An eight-month old Palestinian baby, scheduled for a lifesaving operation in Israel on 24 May but denied a permit to travel by the Israeli military blockade, died on 18 June. Physicians for Human Rights-Israel (PHRI) warn that he will not be the last. The baby, Omar Yaghi, died from a cardiac condition at the Sheba Medical Centre in Tel Aviv. Israel tries to escape criticism for its actions by blaming the Palestinian Civil Affairs Committee (PCAC) for ceasing to co-ordinate with the blockade military because of Israel’s declared annexation proposal. Israel has an obligation, under international law and the Fourth Geneva Convention, to allow freedom of travel and access to medical care for the population subjected to its military occupation since 1967. The Israeli blockade has already resulted in hundreds of deaths and now, with the Palestinian Authority refusing to go along with Israel’s impossibly obstructive ‘permit’ bureaucracy, there is no travel for medical care allowed at all.

It is Israel that controls the area, the crossings and the daily living conditions of the Palestinian population and, since Israel instituted its failed permit system, it shoulders the responsibility to find a quick solution to enable patients to travel freely to receive medical treatment. Most patients in the Gaza Strip travel for treatment in East Jerusalem and the West Bank, and their health must not be affected. Physicians for Human Rights-Israel (PHRI) warns that,“we are on the brink of medical chaos. Right now, hundreds are affected. Thousands will be affected soon.”

As at 7 August, the Israeli Occupation already this year, had destroyed more than 300 Palestinian homes in the West Bank and East Jerusalem. On top of this, 129 eviction notices were issued, forcing 737 Palestinians from their homes and off their land, to make way for Israeli military training zones and nature reserves. In the same period, 419 attacks by Israeli Occupation settlers during the first half of 2020 have resulted in 78 Palestinians injured and damage to 110 hectares of land, as well as the burning and uprooting of more than 3,000 trees. Meanwhile, the Israeli Ministry of Construction and Housing, and the Israel Land Authority have, during the first half of this year, issued permits for the construction of thousands of housing units as well as commercial, industrial and service buildings, in Israeli settlements imposed upon Occupied Palestinian territory. The future looks grim with, for instance, Israel’s plan to make a further 200 Palestinians homeless in the village of Farasin, where there are also precious ancient buildings and a 200-year-old well.

On 7 August, Hezbollah’s leader, Hassan Nasrallah, expressly denied claims that the organisation had ever stored weapons or explosives at Beirut Port. But the important point is that, whether or not weapons were stored there, Israel had convinced itself that Hezbollah was responsible. One year ago, Israel’s Ambassador to the UN, Danny Danon, accused Lebanon of allowing Hezbollah to store weapons at the port and complained to the Security Council, asserting that “The Port of Beirut has become the Port of Hezbollah.” Lebanon’s President has said the explosion may have been caused by ‘outside interference’.

Israel has bombed Lebanon before. Last year, also in August, the Zionist state carried out overnight air strikes in eastern Lebanon while two drones crashed later in Beirut, one hitting a building housing a Hezbollah office. An opponent of Hezbollah, Lebanon’s then-Prime Minister, Saad Hariri, described the Israeli air strikes as “a threat to regional stability”. It is not unreasonable to consider, therefore, that Israel might also have been responsible for causing the latest tragedy in Beirut. US President Donald Trump may, for once, have spoken the truth when he blurted out that the destruction may have been the result of an attack, following briefings by US Defence and Security advisers.

In Iran also, since June, fires and explosions have erupted in six factories and other facilities, including the Parchin missile-production plant and the Natanz nuclear energy site. When asked directly whether Israel was at all responsible for these, the Israeli Defense Minister Benny Gantz answered, “Not every incident that transpires in Iran necessarily has something to do with us”, which hardly served as a convincing denial. Israel’s Foreign Minister Gabi Ashkenazi didn’t help much either, when he commented: “Iran cannot be allowed to have nuclear capabilities”, adding that, “we take actions that are better left unsaid.”

A joint statement issued by the United States, the United Arab Emirates and Israel on the normalisation of ties between Israel and the United Arab Emirates has been greeted, variously, as a historic diplomatic breakthrough and, alternatively, as a betrayal of the Palestinian people as well as a threat to the survival of international law and respect for human rights. The statement admits that “along with the United States, Israel and the United Arab Emirates share a similar outlook regarding the threats and opportunities in the region”. The agreement also looks to increase economic integration and “closer security co-ordination”. The UAE has enjoyed a covert relationship with Israel that goes back to the 1990s. Co-operation has included their intelligence agencies as well as the military – even to the extent of joint military exercises.

Israel has suspended its West Bank annexation plan, in order to secure the deal with the UAE but, in reality, both parties will continue to recognise and support Israel’s on-going and tightening de facto annexation of Palestinian land. The UAE is simply colluding with and covering for Israel, enabling the Zionist regime to avoid the threat of sanctions being imposed by its traditional European allies. Netanyahu, no doubt, hopes the agreement will not only help divert attention away from the corruption charges that plague him but also improve his chances, politically, at home. President Trump will, of course, bask in the light of a ‘glorious achievement’, Middle Eastern and world oligarchs will celebrate another extension of their influence and profiteering, and Israel will be allowed again to get away with murder, even more unhindered than before.

In a telephone briefing on 17 August, Senior White House adviser Jared Kushner announced, with hegemonic arrogance: “Israel has agreed with us that they will not move forward without our consent. We do not plan to give our consent for some time.”

Never mind international law, in particular the Fourth Geneva Convention, or even the so-called Middle-East ‘peace negotiations’ – the US and Israel assume the right to be the sole controllers of the future of the Palestinian people and their right to self-determination! It is no surprise, therefore, that almost immediately following the announcement of the joint statement, Netanyahu, unable to contain himself, shamelessly and triumphantly reaffirmed his determination to impose future annexation.

The objective of all this, is to eclipse the oppression of Palestinians and suffocate their pleas for justice, in order to focus attention and support for the aggression against Iran fostered by the US, Israel and the Gulf States.

In New Zealand, the Palestine Solidarity Network Aotearoa is calling on our Government to demand that Israel lift its blockade of Gaza and condemn, absolutely, the crushing violence and ruin it is imposing upon Palestine.

In Auckland, on 8 August, PSNA activists organised an action for the Days of Resistance to demand an end to New Zealand’s complicity in Israeli war crimes, calling for our country’s officials to put an end to military co-operation with the Israeli Occupation. With much support from passing vehicles, PSNA supporters marched to the Army’s headquarters to demand that we stop purchasing weapons from Israel.

Israeli attacks on civilians, especially those in UN refugee camps, should be of particular concern to the international community. It is sad to reflect that neither our leaders nor news media pay the slightest attention to these crimes and never report, let alone condemn, them. The PSNA is appealing to people to join the movement in demanding the suspension of all bilateral agreements with Israel, so long as it continues to violate international humanitarian law. As a matter of security for us all – never before has it been more urgent to raise the alert and speak up for Palestine. Demand an end to the silence and challenge the lies and misinformation!