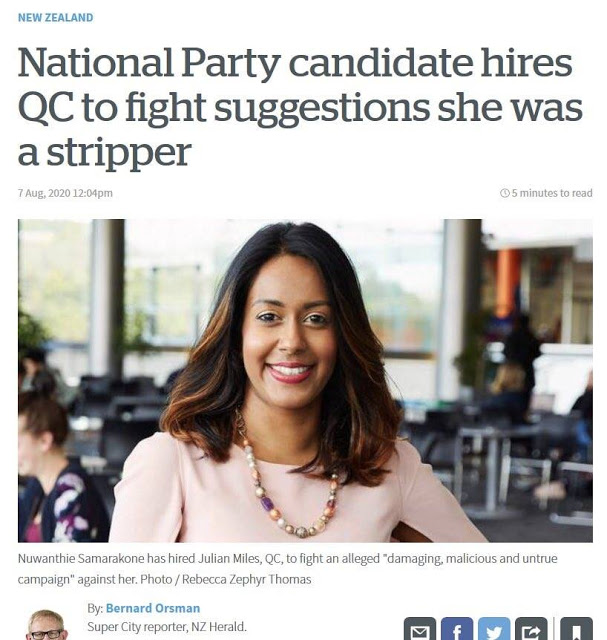 There are bad news cycles, there are poor news weeks lacking in cut-through – and then there’s whatever’s happening with the Opposition. Wherein they’ve transcended mere mediocrity to start showing their true colours in the most inadvertent and unintentional of ways, splashed across our headlines.

The weekend’s revelation that some in National are reportedly attempting to torpedo their own potential candidate in Auckland Central by claiming she’s a former stripper, is by now about par for the course for the party. It’s hardly a ‘new low’ – really more of a ‘new middle’.

And pretty emblematic all-up of where the National Party is at at this point in the campaign. Quite a number of them are so focused on scrabbling for their own individual simulacrum of success that they’re doing ridiculous things which don’t help the party – and therefore, in the real sense, undermine their own potential future prospects.

Rumours, muckraking, and invented attacks on rivals – internal to your own party or otherwise – are part and parcel of party politics, unfortunately. Although it’s rare that they ever serve anything other than the most petty and personal of motivations.

In this case, it’s a pretty bad look on just about every score. The party which has been attempting to brand itself as the vehicle for glass-ceiling penetrating , aspirational liberal feminism and women-in-power-ment … is having a localized meltdown because party members presumably in favour of one up-and-coming female candidate are trying to take down the other female candidate by spreading rumours the latter’s a stripper and sex-scandal-implosion liability.

Feminism in National, it would seem, means that the women just as much as the men get their opportunity to take pot shots at women in pursuit of their own personal advancement.

Now to be fair and sure, this isn’t a phenomenon exclusive to National – nor is it, for that matter, a proclivity exclusive to politics.

Yet as the National Party’s prospects for power diminish as we close upon the Election, their propensity for fighting ever more frantically for what skerricks of potentiality remain has little actual success to immerse itself in and hide behind.

The only thing we can see about them – isn’t the fools’ gold lustre of faked progress on GDP or housing stats or purportedly vital road construction (or tunnel costings). It’s just them as they actually are. Nakedly self-interested invertebrates who’ll quite happily sell their own grandmother for the illusory prospect of power, and cook their own goose amidst the duck-shoving to even have a semi-shot at its attainment.

In a healthy political environment, and when one has the self-confidence to feel secure in possessing principle – this sort of allegation doesn’t tend to happen. It’s usually only when the desperation kicks in, the poison of despair begins to make all manner of previously morally turgid avenues seem palatable, that we see this kind of conduct happening in earnest.

It would therefore be tempting to file this alongside Judith Collins’ weaponized dobbing in of Iain Lees-Galloway just recently; however this is something else. And not only because there’s nothing to suggest there’s any truth to the claims made against Samarakone, the National candidate in question.

Rather, it is because whereas Collins’ quip against Lees-Galloway was a sideswipe across the aisle – this is something that is intra-party, yet turning up outside of the party because the famed National Party internal discipline which usually has all the troops facing the same way even in pressing circumstances has begun to break down in earnest.

Facing the same way does not, of course, mean that knives aren’t also pressed into the backs of those immediately ahead of you, of course – and that is something we’ve seen at least once in the past few months at the very highest levels of the party. But I suspect that, in concert with Collins’ moves to marginalize a few other people in the Party, we are beginning to see National descend into the sort of factional infighting which plagued Labour for much of the nine years it spent in Opposition.

This is particularly the case given the implicit additional target of the attacks upon Samarakone is National Party President, Peter Goodfellow. The infighting therefore, will assumedly be going well beyond the relatively small-scale selection battle over a single now-marginal seat , and may continue to exert a corrosive effect upon National’s interior administration and governance for some time to come.

That may not necessarily be fatal for them in the longer term, of course – as we saw between 2002 and 2005, the roiling chaos which engulfed the party following its worst-ever election result facilitated the rise of one Don Brash, and the re-invigoration of National from not-even-also-ran to almost-government status.

So who knows how things will play out over the next three years. They might even manage to get near 40% … eventually.

Still, I must express my sympathy for Samarakone in this situation. As a younger man, I had not entirely dissimilar underhanded maneuvers and rumour-spreading-for-tactical-nukery carried out against me. Some of it was even semi-true! But fortunately in my case, most of it took place behind closed doors and as whispers in ears to subtly influence things (up until it didn’t). It must be a pretty horrible feeling for her to have these sorts of increasingly lurid allegations blared across the headlines.

And not least because it makes her the villain for daring to stand up to the faceless ‘whispering campaign’ by refuting it, bringing in legal sanction to get it to actually stop, and then having somebody leak that that’s what she’s doing. Because then it’s perceptibly ‘on her’ that there’s bad publicity and ‘oxygen’ as to the matter.

In any case, I think it fair to say that National is not so much starting the campaign in Auckland Central on the back foot – as actively underwater. And when you are in it up to your eyeballs, it is occasionally good advice to close your mouth. As a party, I mean. People might inadvertently adduce something as to your character from what you say otherwise.