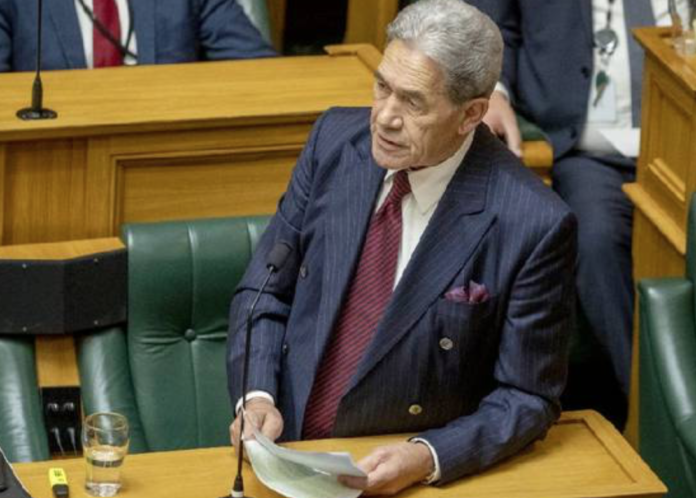 When Winston throws down, he doesn’t hold back does he?

Peters claimed Morton heard about the details of his case because she was there when former minister Anne Tolley told Paula Bennett in a ministerial office.

Peters alleged the information was then passed to Newsroom editor Tim Murphy and blogger David Farrar.

Morton used to work for Newshub and NewstalkZB, said Peters.

“Newshub was doing its best to protect her after David Seymour tried to get the story leaked through channels connected with Morton. Three Newshub journalists … looked collectively stunned when they were told they had burnt Ms Morton as a source.

“They knew they’d been tumbled. When this was put to the Newshub reporters that it would also expose National and Jordan Williams’ dealings with Tim Murphy, one of the Newshub journalists paused and said that National were ‘distancing themselves’ from the story.

“But it was an Act-inspired hit job to damage me politically in collaboration with a National Party staffer, Rachel Morton, who was the source of the leak and the source of Jordan Williams weaponising the information during the election campaign.

“Every last one of them – Morton, Seymour, Williams, Bishop, Murphy, Farrar – played dirty politics to breach my inalienable right, and the inalienable right of every New Zealander, to privacy.

Let me be crystal clear here.

I think that it was disgraceful that Winston’s personal information was leaked before the last election and the scum bags who did it should have been caught and punished severely.

You can’t have the State use privileged information about individuals for political point scoring, that’s incredibly dangerous.

I also supported Winston’s Court Case and am sorry he wasn’t successful, so I am totally on his side.

This fanciful conspiracy theory sounds like the sort of pixie dust Cameron Slater and Simon Lusk trade in, it simply doesn’t ring true.

I don’t know Morton and while I think Farrar and Williams are capable of much malice, this sort of dirty politics simply doesn’t connect for Seymour or Tim Murphy.

I feel that Winston has defamed an enormous cast of characters in a Game of Thrones plot that sounds as ridiculous as it is reads.

Winston is abusing Parliamentary privilege at a time when he is desperately deflecting from this story about him pushing for friends to go to Antarctica on the taxpayer.