Folks I don’t want to go on and on and on about this, but I think we should be seriously considering about some way to seize Rio Tinto assets now before they bugger off because I just don’t believe they are going to stump up with the $250m needed to decontaminate Tiwai Point when they leave next year. 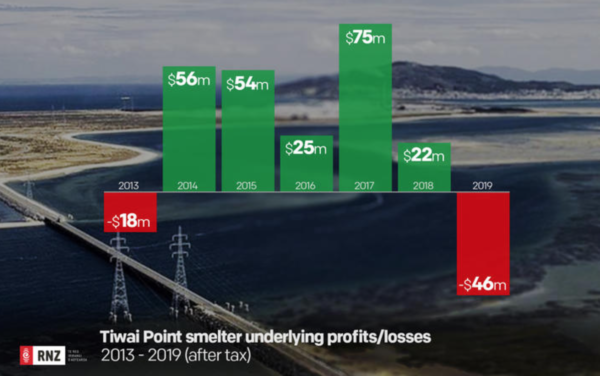 …why the fuck would they spend $250million cleaning up their toxic pollution?

If they are going to renege and play games over waste worth $4m, what the living Christ are they going to do for a bill of $250million?

Look, Rio Tinto have an appalling track record around the world of screwing over the local populations they pollute, look at how they destroyed a 46 000 year old Aboriginal cave and obscenely shrugged…

Rio Tinto has repeated its apology to traditional owners for the destruction of a rock shelter that had been occupied for more than 46,000 years, after its iron ore chief executive, Chris Salisbury, reportedly told a staff meeting that the apology was for any distress caused, not an admission the company had done wrong.

According to the Australian Financial Review, which says it heard a recording of a Rio Tinto staff meeting held last Wednesday, Salisbury described the events leading up to the detonation of the site, then said: “That’s why we haven’t apologised for the event itself, per se, but apologised for the distress the event caused.”

He also reassured staff the company maintained the backing of “political leaders of both sides” (despite the federal Labor party forming a Senate inquiry), saying he had “engaged with lots and lots of stakeholders and … quietly, there is still support for us out there”.

…if you are an enormous evil corporation who is closing a smelter because of a $46m loss, who manipulates and drags their heels over a $4m clean up and who doesn’t care about committing a cultural war crime against humanity, why the hell do any of you think they’ll pay us quarter of a billion to clean up their toxic legacy at Tiwai?

Come on folks, let’s get the $250m up front thanks, and if that means seizing assets, let’s start seizing.