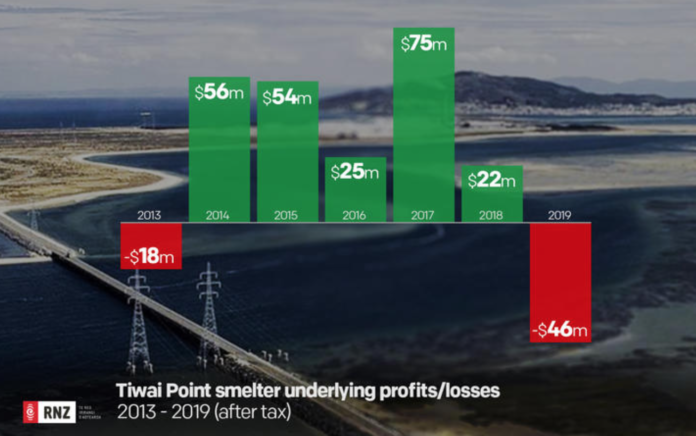 I’ve got a really bad feeling about this…

“Be responsible,” she said. “Don’t just pack up and run, put on your big boy pants and clean up your mess you’ve left.”

She was shocked at Thursday’s announcement New Zealand Aluminium Smelters would wind down its operations and cease production from next August.

Like many in Mataura she was worried about what it meant for the more than 8500 tonnes of ouvea premix – a waste byproduct of aluminium production – stored in the town.

“There’s a lot of angry people here in Mataura,” she said.

“Every time it rains now we think ‘Is there going to be another flood and what impact is that going to have on our community?’ We all had to pack up and leave town at our own expense last time and that’s going to happen again.

“They [Rio Tinto] need to come and face the community.”

When wet, the ouvea premix releases ammonia gas, which is toxic to humans.

The disused papermill it is stored in came under threat during February’s floods and locals think it will only be a matter of time until it happens again.

New Zealand Aluminium Smelters entered into a $4 million agreement with local councils and central Government in March last year to remove the waste from Mataura and other sites around Southland over six years.

But Sort Out The Dross spokesperson Cherie Chapman said that was not fast enough – especially now the smelter would close next year.

“The environment has changed significantly [since March last year]. Now we’ve got them closing and we have very serious floods on the radar.

She had tried to arrange meetings with the smelter’s chief executive, Stewart Hamilton, but he refused, Chapman said.

…so we already have a situation of pollution and contamination that Rio Tinto are paying lip service to and the argument for shut down is that it has cost them $46m last year.

Ok, so now include in that the fact Rio Tinto are expected to pay $250m to decontaminate Tiwai Point.

Do any of us believe they will actually do that?

…Rio Tinto palmed off that contamination to some bullshit artist who smuggles the waste around in secret and there still isn’t any clean up.

Shouldn’t the Government be scrambling right now to see what assets we should be seizing to ensure those arseholes can clean this up?

Rio Tinto has bullied and manipulated NZ into providing them cheap power since it was created, they already have a record of deception when it comes to cleaning up waste, why are we being such trusting Muppets when it comes to them having $250m to clean up their toxic waste?