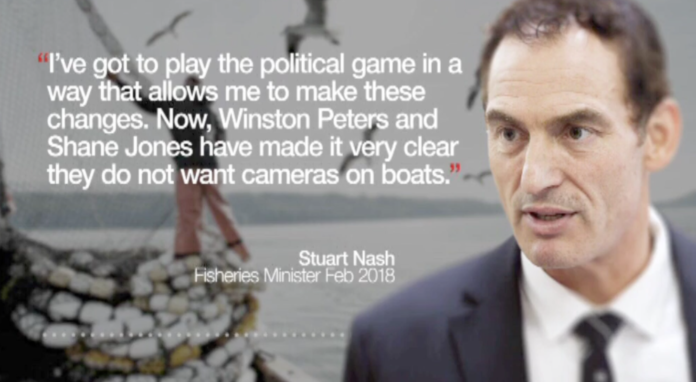 Michael Morrah is one of NZs best environmental TV journalists, his focus on the obscene environmental corruption of private fishing companies alongside his work to uncover the political corruption that allows for that damage to occur marks him out as one of our best investigative reporters.

The recording was from February 2018, around the time the Government first delayed the rollout of cameras on nearly 1000 fishing boats – since then it’s been delayed again until at least October next year.

In it, Nash points the finger of blame squarely at them for delaying plans to put cameras on commercial fishing boats to make sure they don’t break the law.

…the audacity is that NZ First pretends this isn’t happening and that the exact same dynamics are at play in the racing industry as well.

NZ First see Unions supporting Labour and the worker rights legislation that relationship provides and National’s relationship with the rural community and the pro farming laws that creates and they rationalise that their own relationships with provincial economic power houses who pay for lax oversight is somehow ok.

The sooner NZ First slip under the 5% threshold, the better NZ will be.