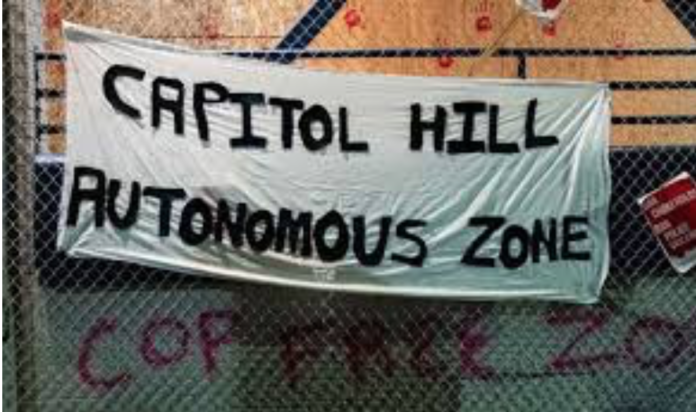 So for the past day or so, I’ve been watching developments in the Seattle “Capitol Hill Autonomous Zone”. It’s kinda amazing.

Basically, after the Seattle police pulled out [apparently abandoning a station in the process], Anarchists and Anarcho-Communists pulled *in*, and set up some sort of commune in the vicinity – and then started quasi-fortifying it with barricades and attempts at recruiting a militia.

I predicted at the time that it was probably going to play out rather like the abortive uprising/commune from Les Miserables … but it appears that this was perhaps somewhat optimistic.

As with many putative revolutionary efforts … the leadership proved somewhat unstable. By which I mean, the tenure of one of the lead organizers running the show lasted approximately six hours – ending when they were repeatedly accused of domestic violence by former partner(s) via twitter … followed by said organizer announcing their intent to vacate the office (and planet) in an act of not-exactly-revolutionary suicide. [although as far as I am aware, they did not viably undertake this, and are still alive – if off twitter – which is good, because the stated justification of their feeling unable to improve from being an abuser is .. pretty pessimistic]

Said tenure may have been brief, but it could not be termed boring – with a perhaps unexpected announcement about how “the homeles [sic] […] took away all the food”, and therefore required urgent donations of soy-based sustenance [I’m not kidding, that’s literally what they were after] “anything to help us eat” … prompting one associate to note that they’d only had ‘communism’ for two days and were *already* starving.

Although all of that drama cannot *hope* to hold a candle to this morning’s intriguing development … the emergence of a local AirBNB landlord/rapper and associates, who promptly declared themselves to be the new “police”, and started implementing policies of ‘stop-and-frisk’, and gratuitous beat-downs for potentially minor offending. It’s not quite the Committee of Public Safety … but the “People’s Force” is certainly turning out to be an interesting demonstration of the implicit principle around revolutions eating their own dreams for the second course.

Particularly as it appears that the man variously (if somewhat sensationally-exotically) referred to as “The Warlord of CHAZ”, or by his first name – Raz .. appears to have been a vocal initial advocate and proponent of the ‘revolutionary’ ‘secession’ of the Autonomous Zone in the first place.

Sadly, however, all good things must come to an end … and as of this afternoon, the Seattle PD have announced their intent to move in and reclaim the commune formerly known as CHAZ.

In theory you *could* suggest (in keeping with the spirit of these weeks) that they felt moved to act due to a black man and assorted associated militia now running things, rather than a ‘mostly harmless’ group of anarcho-larpers – although I think it may have a little more to do, in practice, with the reports that the “People’s Force” of Raz of CHAZ, had started going around demanding protection money from other locals and their businesses, as well as, you know, assaulting people in the street for looking suspicious or filming them.

Which means that, I suppose, you could *also* allege (in keeping with the spirit of these times) that the underlying reason for the sudden Seattle PD interest in retaking the CHAZ – is because they absolutely *hate* having competition in these spheres. The police, after all, are a tangible expression of the concept of a state enjoying a theoretically exclusive monopoly on violence.

It certainly has been a rather curious thing to watch various persons on twitter suddenly come to grips with the notion that a localized abolishment of police may well create a vacuum into which steps something that’s like the police but actually somehow *worse* and less accountable to its subjects.

Although I must confess – I wasn’t expecting the development and the collapse of this entire thing to take place so rapidly, nor so … bathotically, over a few days in mid-June 2020.

With deference to some of the rather more … impressive communes and failed revolutionary uprisings of the past 200 years or so, it really does put one in the mind of that excellent aphorism of Marx –

“Hegel remarks somewhere that all great world-historic facts and personages appear, so to speak, twice. He forgot to add: the first time as tragedy, the second time as farce.”

We could, perhaps, term this the 20th Brouhaha of L’Raz d’Washington.