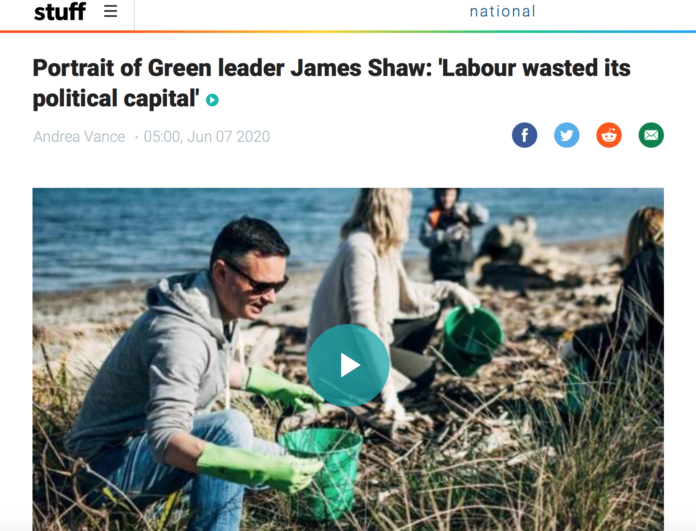 Andrea Vance’s political portrait of James Shaw serves as a tender obituary to him and the Green Party pending their demise at the ballot box if they slide below 5%, but doesn’t seek to explore why they are once again clinging to electoral obliteration.

She doesn’t ask why the Greens have gone backwards in the last 3 elections and she kindly ignores the latest polls that have them sinking beneath 5%.

Vance reads like she is from the same Identity Politics cultural clique that the Greens currently occupy so she might be blind as to why the Greens have become so alienating to the wider electorate.

It’s not just the identity politics brand damage to the Greens that have eroded their support, it’s what the Greens have done with the power they have had that has cost them.

The Greens lacklustre performance on stopping the sale of water to China, handing National their Parliamentary Questions and their next to useless Carbon Neutral Legislation have all combined to leave actual environmental activists demoralised.

At no point does Vance seek to ask why the Greens are performing so badly and based on the answers Shaw gives in this interview, I don’t think Shaw knows why either.

The Greens have been plagued by poor political advisors and bad backroom tactics that have failed to give them any leverage. Combine this with pure temple politics that exclude rather than attract, and you have a Party that keeps sliding backwards.

As someone who has voted Green all my life, watching their demise is heartbreaking.

If the Greens do manage to limp over 5% in September, the grim reality is that it won’t manage to beat their 2017 whipping, so if the Greens are back and if they are under 6.4% both James and Marama must resign as leaders and pass the co-leadership along to the next generation of Green leaders.