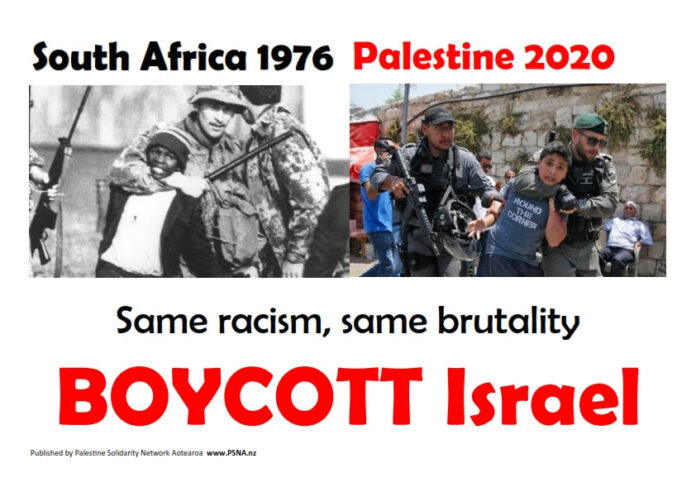 Palestine Solidarity Network Aotearoa is accusing the New Zealand government of developing a back-door policy entanglement with the State of Israel.

PSNA says it only discovered that New Zealand had actually signed a Technical, Innovation, Research and Development Agreement with Israel through a Facebook post by the Israeli Embassy.

“Normally a major bilateral deal would involve photo opportunities at Parliament and press releases.  On this occasion, with the Israelis, nothing.”

John Minto says he concludes that the government is embarrassed about an increasing set of agreements with Israel.

“They know that they shouldn’t be doing deals when Israel is poised to illegally annex major parts of the Occupied Palestinian Territories.”

“They know they should be breaking off agreements with Israel at this time – not signing new ones.”

John Minto says the previous government delayed signing the New Zealand-Israel Film Coproduction Agreement until 2015, because it thought that signing the Agreement while Israel was attacking Gaza the previous year was ‘not a good look.’

“The current government has never criticised Israeli actions.  Not even in 2018 when Israeli snipers were gunning down unarmed Palestinian protesters through the Israeli blockade fence around Gaza.  And now not when the Israeli government is ready to steal more Palestinian land.”

Respect for international law and the most basic human rights demands New Zealand suspend all bi-lateral agreements with Israel until the threat of annexation is lifted.