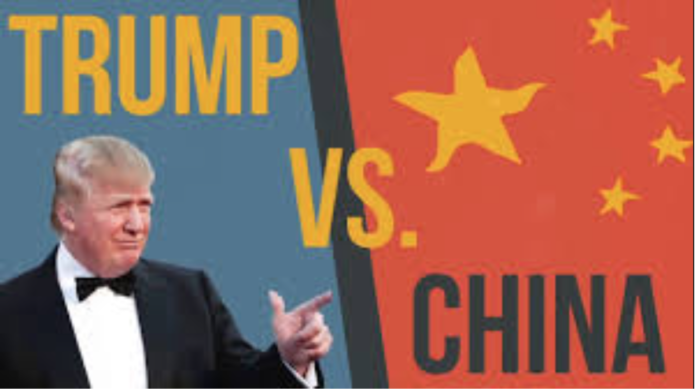 One of the fears I’ve had since the pandemic broke out was how quickly conflict with an external enemy would benefit both China and Trump.

Questions over the secrecy of China’s initial response are as feared in Beijing for their domestic potential at disruption as it does their world standing while Trump wants to desperately distract a nation in the grip of a pandemic his incompetence has exacerbated.

Both China and Trump have the need to externalise the enemy and with so much tension i  the South China Sea the reality of conflict gets closer every day.

Today it suddenly sped up with threats Trump could cut Chinese student access to America while China threatened an invasion of Taiwan in response.

Donald Trump has threatened to “cut off the whole relationship” with China, as tensions between the US and China continue to rise over the origins of Covid-19.

“I’m very disappointed in China. I will tell you that right now,” the US President said in an interview with Fox Business. “There are many things we could do. We could cut off the whole relationship. Now if you did, what would happen? You’d save $500 billion.”

It came in response to a question about whether the US should refuse Chinese nationals student visas for sensitive science areas.

The Chinese government has hit back at the President through its state-controlled Global Times newspaper, which said cutting off China “may put world peace in a dangerous position”.

The report accused the President of “talking nonsense”, claimed he was “bluffing and acting tough towards China to win more support”, and called him a “giant baby on the brink of a meltdown”.

Beijing also threatened to take Taiwan by force if the US cut China off. “China has nothing to be afraid of as ‘in the past, we didn’t solve the Taiwan question because we wanted to maintain the China-US relationship, and if the US unilaterally cuts it off, we can just reunify Taiwan immediately since the Chinese mainland has an overwhelming advantage to solve this longstanding problem’.”

Looking at yesterdays winners and losers in the budget, I noted that Peace was a loser…

Peace – Thanks to the American Military Industrial Complex Franchise ‘RocketLab’ and NZ secretly signing a space deal with America to launch military satellites into space, NZ is a target for Chinese and Russian Subs sitting off the East Coast so that means we need planes that can drop torpedoes onto those subs. The NZDF is buying four P-8A Poseidon maritime patrol aircraft for that task and beefing up with almost $900m to buy new C-130J Super Hercules. With China and America standing off in the South China Sea and implicating each other in the pandemic, it looks like we might spend our money but not get the toys before the fighting starts.

…we might be in need of that extra military far faster than we first thought.